The cooperative thermomechanical properties of plant-derived polymers have been studied insufficiently, although this feedstock has a very high potential. In the present paper, we analyzed the changes in the structure and physicochemical properties of lignin-rich biomass induced by thermomechanical pretreatment. Low-temperature treatment allows one to retain the original supramolecular structure of the cell walls, while an appreciably high disintegration degree is reached. This increases the reactivity of the material in the subsequent heterogeneous reactions. Mechanical pretreatment at medium temperatures (10 °C), when almost all cell wall polymers except for low-molecular-weight lignin are in the glassy state, enhances the mobility of cell wall polymers and causes sufficient cellulose disordering, while the specific surface area is not significantly increased. High-temperature pretreatment of reed biomass is accompanied by pore formation and lignin release from the cell wall structure, which opens up new prospects for using this biomass as a matrix to produce core–shell-structured sorbents of heavy metals. The energy consumed by mechanochemical equipment for the activation of reed biomass was determined.
Keywords: thermo-mechanochemical pretreatment; lignocellulosic waste; cell wall structure; lignin-rich biomass; enzymatic hydrolysis thermo-mechanochemical pretreatment; lignocellulosic waste; cell wall structure; lignin-rich biomass; enzymatic hydrolysis

Lignocellulosic materials, a common agricultural and wood industry waste, have great potential as renewable feedstock that can be converted into platform chemicals, second-generation biofuels, and a number of other high-demand chemical products [1]. Integrated biorefinery, which comprises the conversion of polysaccharides to low-molecular-weight carbohydrates [2,3,4] and the use of lignin as a component of high-energy fuel [5,6,7] or core–shell-structured sorbents with humic acids [8], is the most promising green approach in the refinery of plant biomass. Because of its complex supramolecular structure, the lignocellulosic biomass requires mechanical [9,10,11], thermal [12,13,14] or chemical pretreatment [15,16,17]. The properly selected pretreatment method has a favorable effect on the efficiency of subsequent processes, since it modifies the material structure, enhances the availability of the target components and the specific surface area of particles, as well as reduces cellulose crystallinity.
Special attention should be paid to the structure and properties of lignin, whose content in the cell wall can be as high as 10%–45% [18,19,20]. In a number of cases, lignin or its degradation products may shield the surface from the reagents after pretreatment, and the total reactivity will be low even if there are a well-developed specific surface area (Sspec = SSA) and low crystallinity of cellulose [18,19,20].
The phase transition temperatures for individual polymers are known. The melting point and melt flow temperature lie in a broad range (90–193 °C) [21,22,23]. Cellulose is characterized by the glass transition temperature of −27 °C, the melting point of 135 °C, and the melt flow temperature of 240–244 °C [21,24]. The melting points of hemicelluloses vary significantly depending on the type of plant biomass, but are not higher than 167–181 °C [21].
However, the thermomechanical characteristics of native plant materials have been insufficiently covered in the literature and differ from those of individual extracted components. In some cases, woody lignocellulosic materials can exist in a glassy state at temperatures as high as 16 °C [24]. Melting of the most refractory fraction of hemicellulose occurs at temperatures above 180 °C [21], being accompanied by the decomposition of the lignocellulosic material.
This study was aimed at investigating the physicochemical and structural modifications caused by thermomechanical pretreatment of lignin-rich biomass.

The following reagents and materials were used in this study: common reed (Phrágmites austrális) biomass (collected in 2017 in the Novosibirsk region, Russia; coordinates: 55°1.8119′0″ N, 82°55.2258′0″ E), sodium azide (99%, Sigma-Aldrich, St. Louis, MO, USA), sodium acetate (99%, Sigma-Aldrich), potassium hexacyanoferrate(III) (99%, Sigma-Aldrich), D(+)-glucose (99%, Sigma-Aldrich, St. Quentin Fallavier, France), acetic acid (99%, Sigma-Aldrich), and CelloLux 2000 enzyme cocktail (Production Enterprise OOO Sibbiopharm Ltd., Berdsk, Novosibirsk region, Russia). The CelloLux A enzyme cocktail was a mixture of enzymes exhibiting biocatalytic activity immobilized on the model substrates: xylanase (8000 U/g); cellulase (2000 U/g); β-glucanase (up to 1500 U/g), and glucoamylase (20 U/g).
Enzymatic hydrolysis was carried out at 50 °C in a thermostated shaker at a shaking speed of 120 rpm in 1:20 acetate buffer (pH 4.6). The reaction mixture was preserved with sodium azide. The reducing sugar content was measured using the Hagedorn–Jensen ferrocyanide method.
Granulometric analysis was conducted by laser diffraction scattering (LDS). The specific surface area of the specimens was determined according to thermal desorption of nitrogen. The cellulose crystallinity index was measured on an X-ray diffractometer (CuKα radiation, Bregg–Brentano geometry in the reflection mode). The IR spectra were recorded as 100 scans with a Vector-22 IR-Fourier spectrometer (Bruker) in KBr pellets (4 mg of the specimen per 540 mg of KBr) in the wavelength range of 400–4000 cm−1 with a resolution of 2 cm−1.
Klason (acid-insoluble) lignin and extractives were quantified pursuant to the TAPPI T222 om-02 and TAPPI T 204 cm-07 test methods. The content of cellulose referred to as Kürschner cellulose was determined via isolation using a 4:1 (v/v) mixture of nitric acid and ethanol for 4 h. Pentosans were transformed to furfural in boiling 13% hydrochloric acid and determined spectrophotometrically using orcinol-ferric chloride reagent according to the T 223 cm-01 test method. The ash content was measured at 525 °C according to the TAPPI T 211 om-02 test method.
Mechanical pretreatment of the biomass was conducted in a laboratory-scale attritor (manufactured at the Institute of Solid State Chemistry and Mechanochemistry, SB RAS, Novosibirsk, Russia) filled with steel grinding bodies (9 mm in diameter) and equipped with a thermostat system. The temperatures of the thermostat circuit were −196, 10, 100, and 180 °C. The treatment duration was 20 min and the rotor speed was 600 rpm.
The energy costs for machining were measured using a Mercury high-speed wattmeter (Incotex Electronics Group, Russia) connected to the DVP-SA2 industrial controller (Delta Electronics, Inc., Taipei, Taiwan) using the ModBus protocol.
Transmission electron microscopy. The specimens were fixed with 1% gelatin solution and then immobilized in 1% osmium tetroxide solution, dehydrated using a series of ethanol solutions of increasing concentrations and acetone, and embedded in an Epon–Araldite mixture. Semithin and ultrathin cross-sections were prepared using a Leica EM UC7 ultramicrotome (Leica, Wetzlar, Germany).
The semithin cross-sections were stained with 1% azure II solution. The ultrathin cross-sections were examined without additional contrasting. The specimens were studied on an Axioimager Z light microscope (Carl Zeiss, ‎Oberkochen, Germany) and a JEM 1400 transmission electron microscope (Jeol, Tokyo, Japan) at an accelerating voltage of 80 kV. The images were recorded using a Leica DFC420 C digital camera (Leica, Germany) and a Veleta side-mounted camera (EMSIS, Muenster, Germany).

Thermomechanical pretreatment significantly alters the physicochemical properties and structure of lignin-rich plant biomass.
Low-temperature pretreatment allows one to retain the initial supramolecular structure of cell walls, thus ensuring a significant disintegration degree and increasing material reactivity during subsequent heterogeneous hydrolysis.
Mechanical pretreatment at medium temperatures (10 °C), when almost all cell wall polymers except for low-molecular-weight lignin exist in the glassy state, makes cell wall polymers more mobile. Specific surface area does not increase substantially under these conditions, but cellulose becomes disordered to an appreciable extent.
High-temperature pretreatment of reed biomass is accompanied by pore formation and lignin release from the cell wall structure, thus opening up new prospects for using this biomass as a matrix to produce core–shell-structured sorbents of heavy metals. 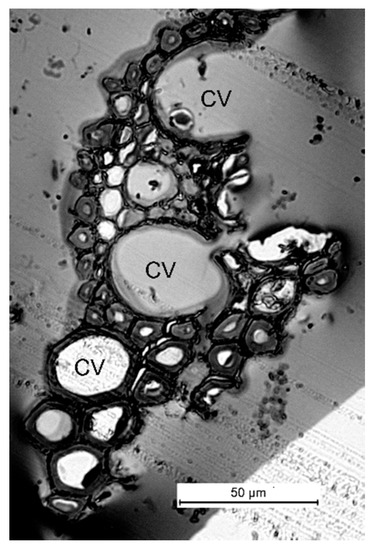 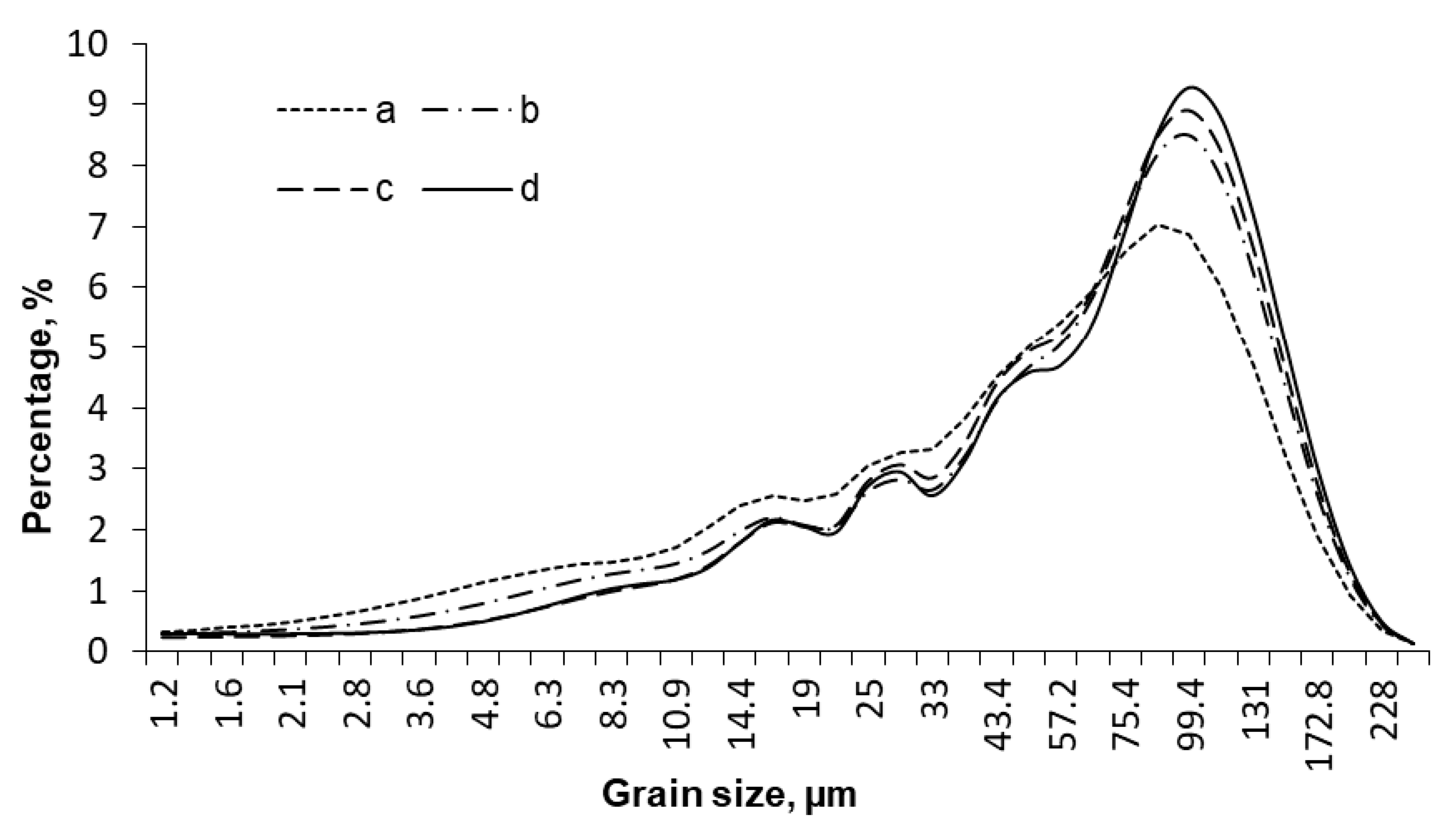 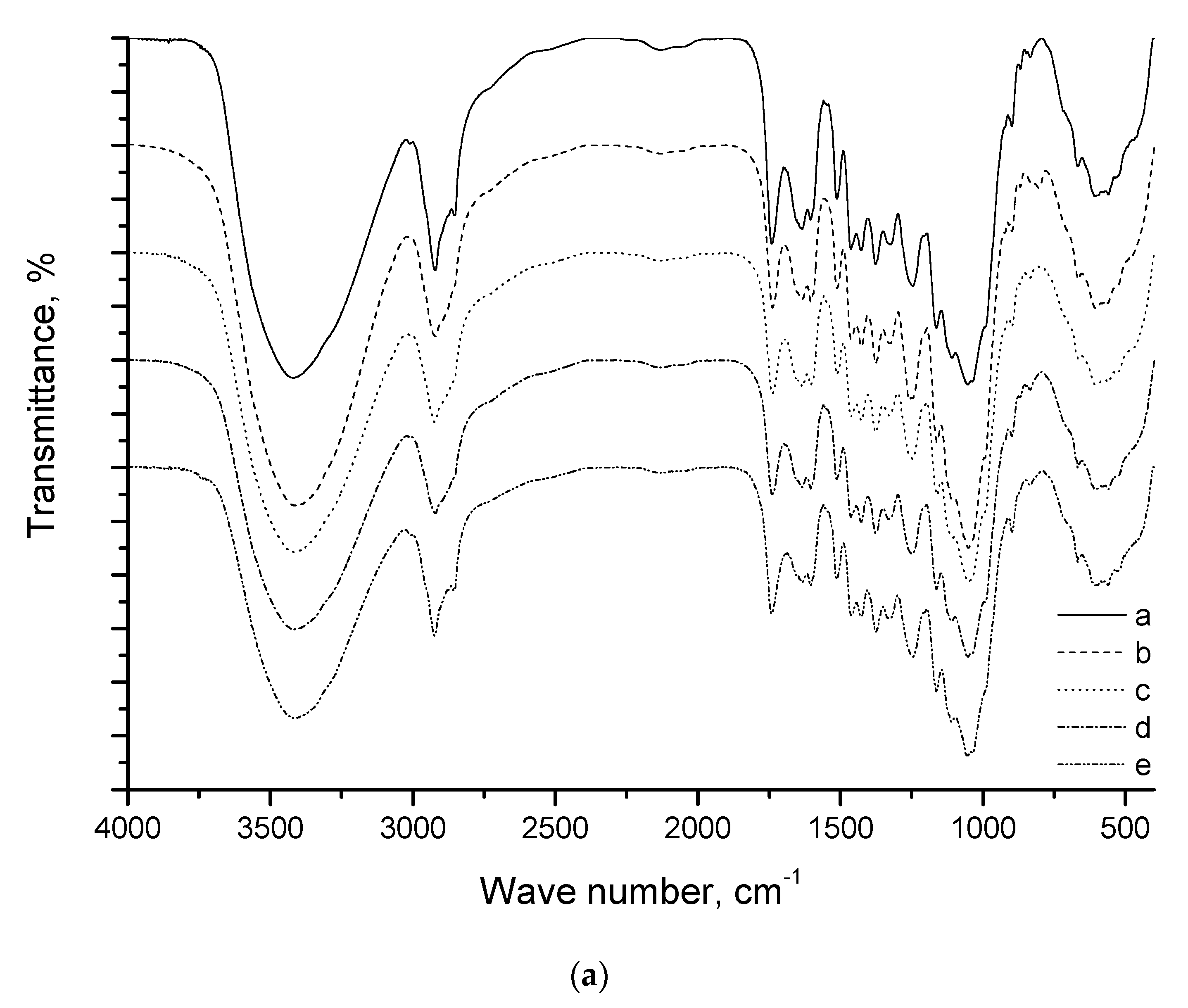 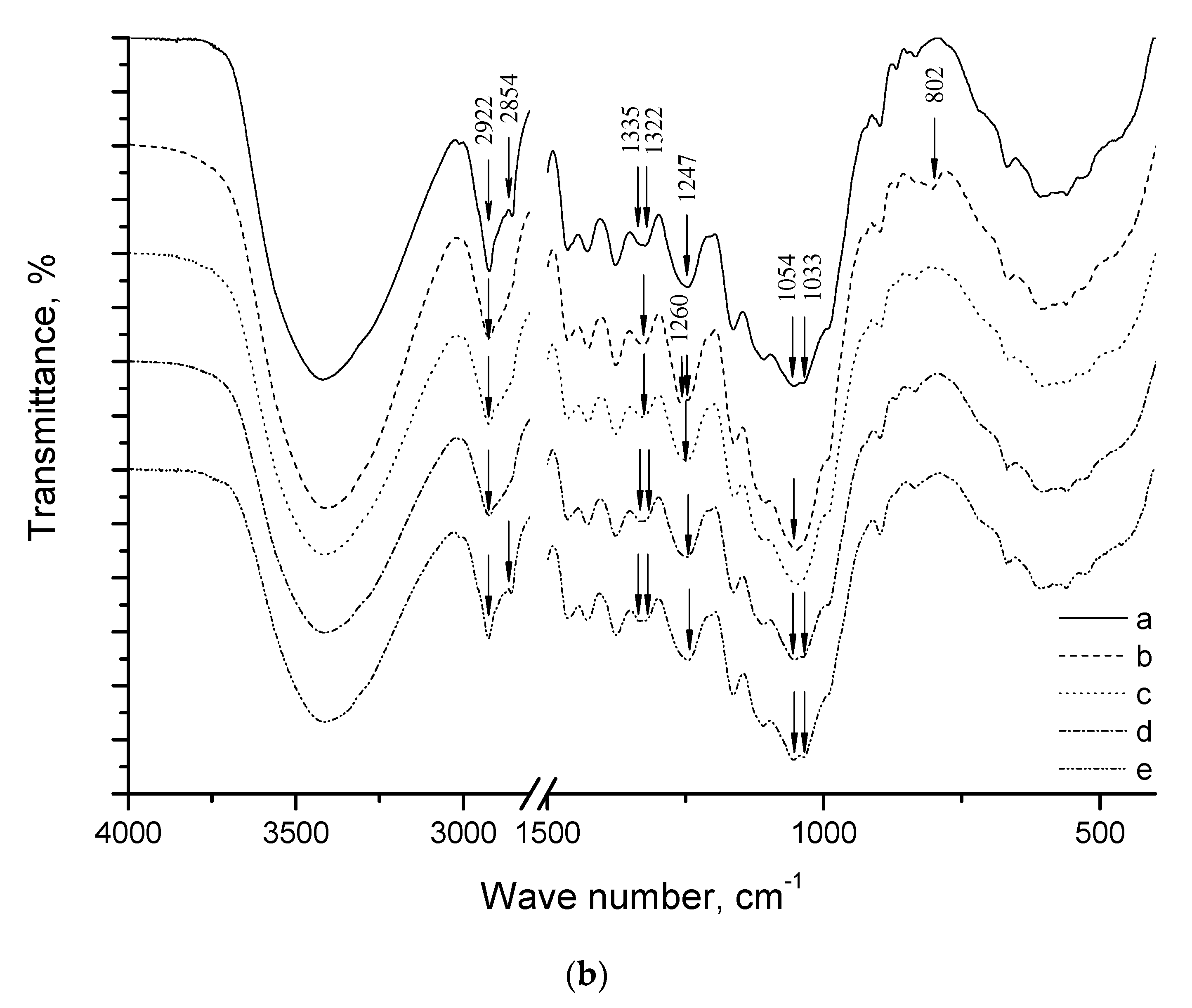 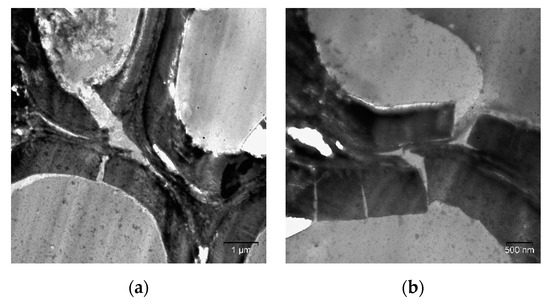 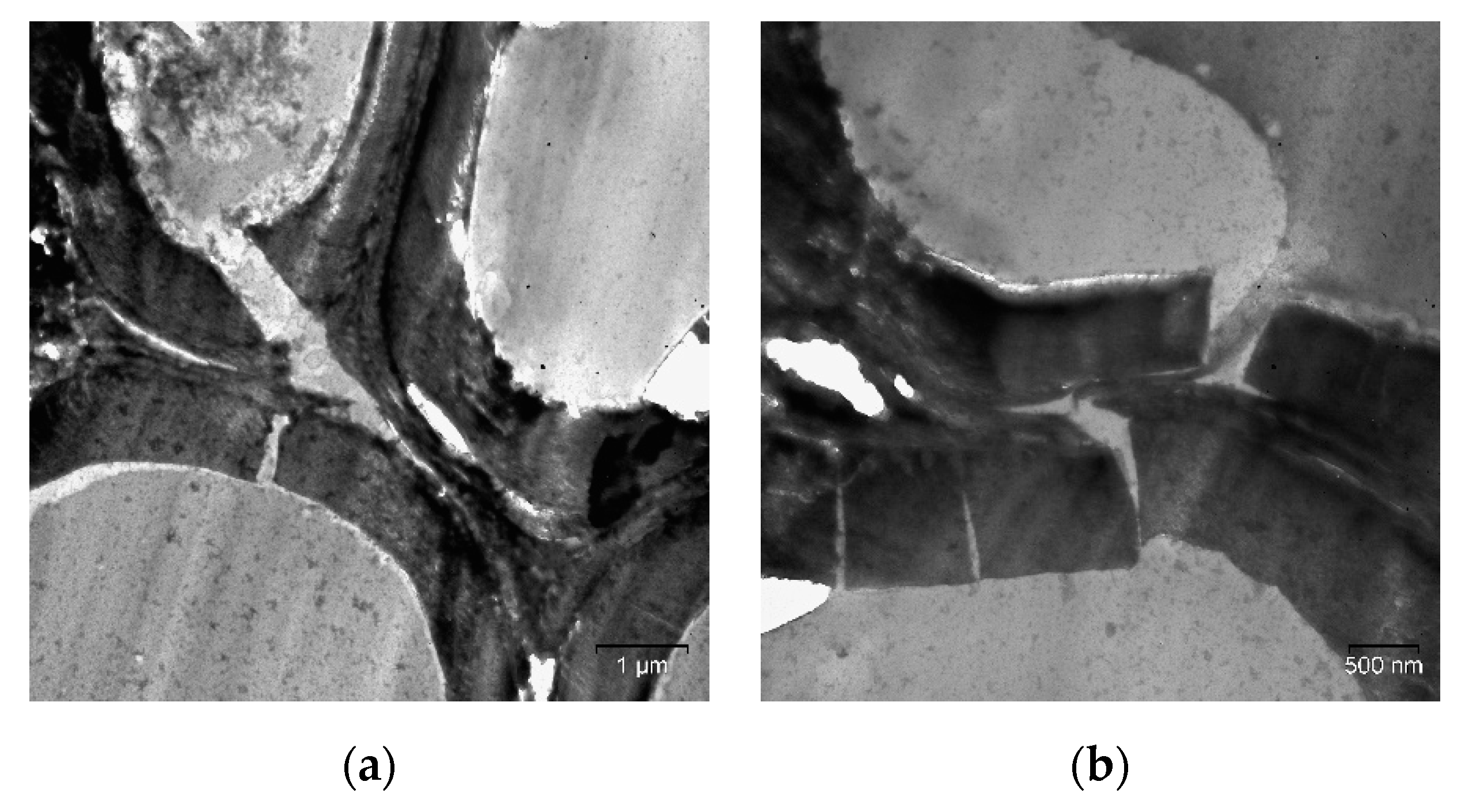 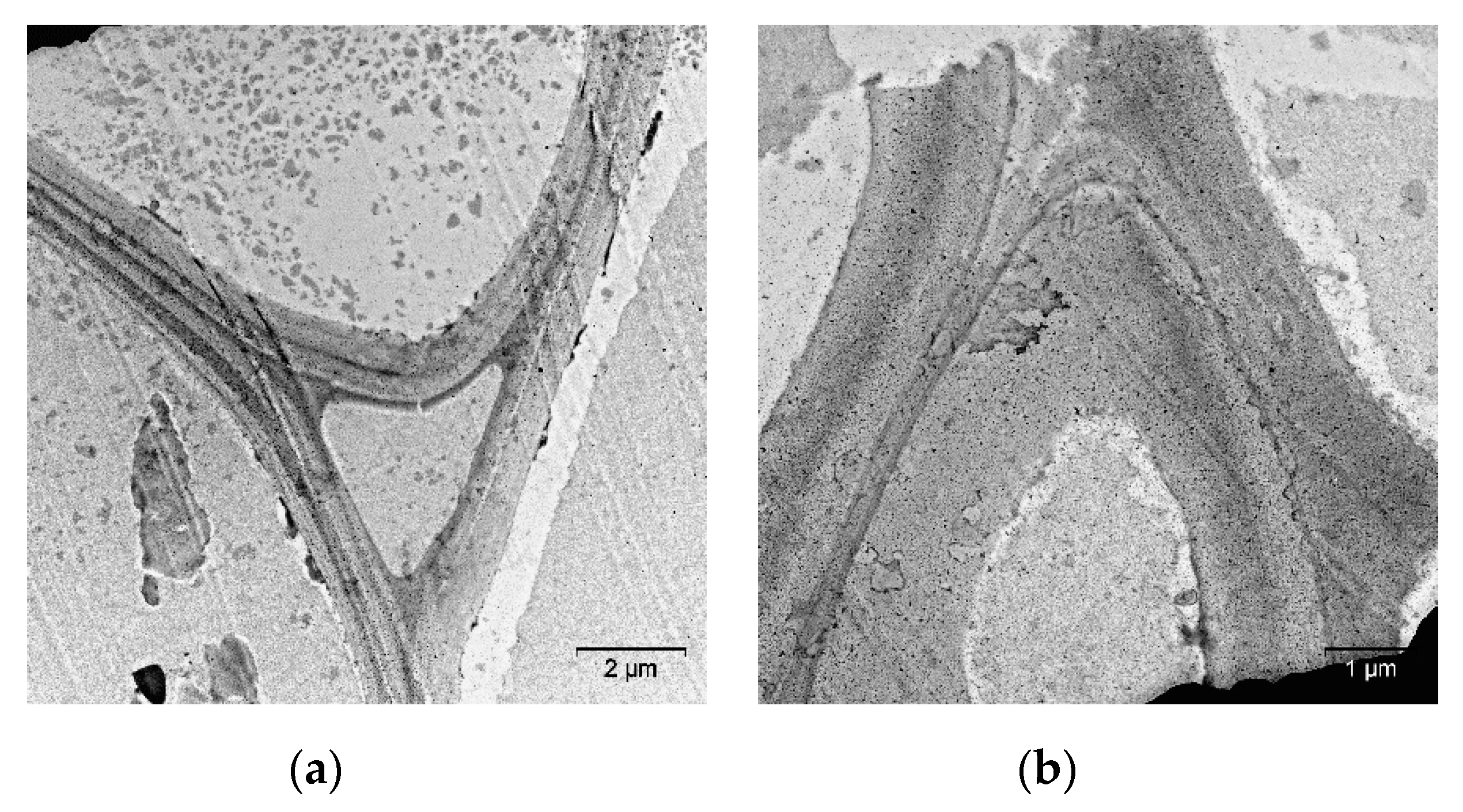 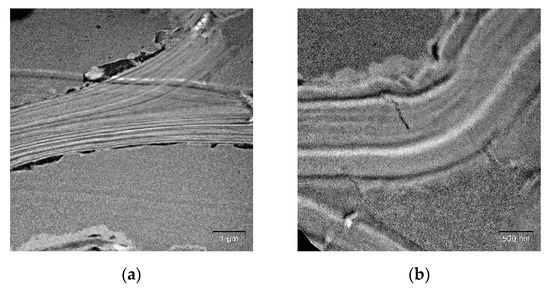 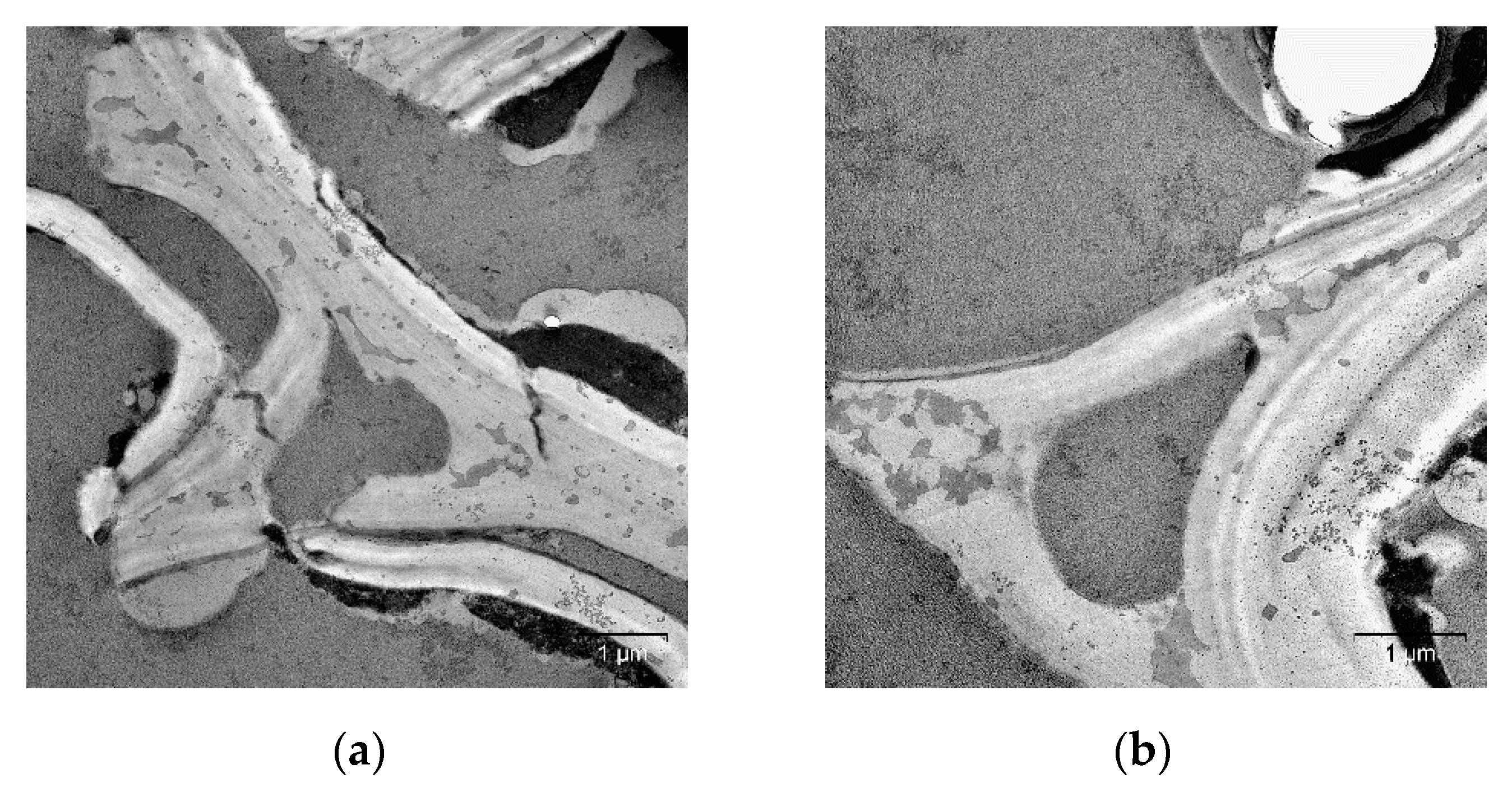 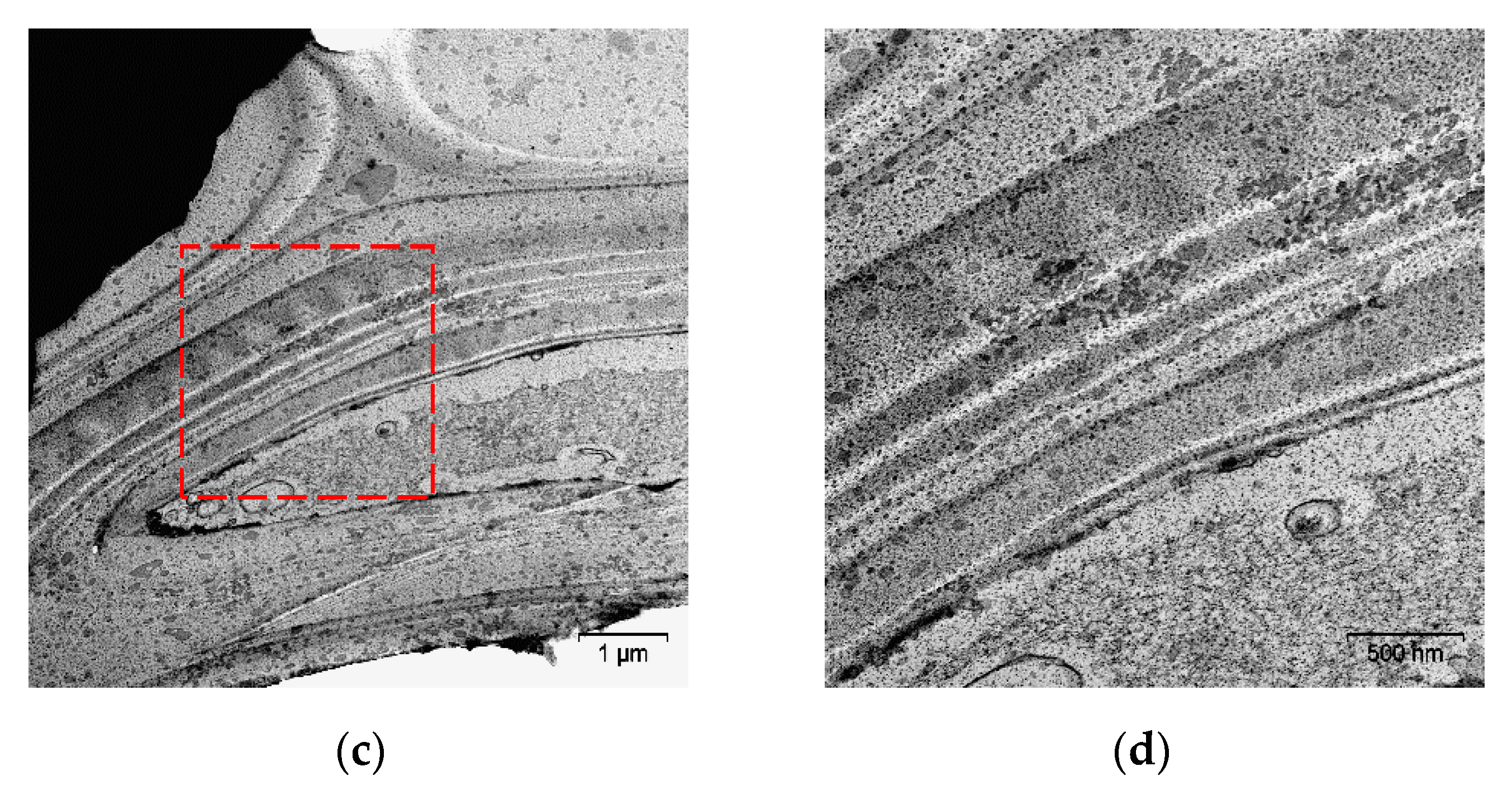