Methods for the Evaluation of Industrial Mechanical Pretreatments before Anaerobic Digesters

Complex formation is among the mechanisms affecting metal bioaccessibility. Hence, the quantification of organic metal complexation in food items is of interest. Organic ligands in solutions of environmental and/or food origin function as buffering agents against small changes in dissolved metal concentrations, being able to maintain free metal ion concentrations below the toxicity threshold. Organic matter in vinegars consists of bioactive compounds, such as polyphenols, Maillard reaction endproducts, etc., capable of complexing metal ions. Furthermore, transition metal ions are considered as micronutrients essential for living organisms exerting a crucial role in metabolic processes. In this study, differential pulse anodic stripping voltammetry (DPASV), a sensitive electrochemical technique considered to be a powerful tool for the study of metal speciation, was applied for the first time in vinegar samples. The concentrations of Cu complexing ligands (LT) in 43 vinegars retailed in Greece varied between 0.05 and 52 μM, with the highest median concentration determined in balsamic vinegars (14 μM), compared to that of common vinegars (0.86 μM). In 21% of the vinegar samples examined, LT values were exceeded by the corresponding total Cu concentrations, indicating the presence of free Cu ion and/or bound within labile inorganic/organic complexes. Red grape balsamic vinegars exhibited the highest density of Cu ligands per mass unit of organic matter compared to other foodstuffs such as herbal infusions, coffee brews, and beers. Among the 16 metals determined in vinegars, Pb is of particular importance from a toxicological point of view, whereas further investigation is required regarding potential Rb biomagnification.
Keywords: copper complexation; organic ligands; trace metals; vinegars copper complexation; organic ligands; trace metals; vinegars

Vinegars are one of the few acidic condiments used as a flavoring agent, preservative and, in some countries, a healthy drink [1,2]. Wine vinegar is made from red or white wine and is the most widely used vinegar in the households of Mediterranean and Central Europe countries [3]. Vinegars are classified as “common” or “balsamic” according to their production from either wine or cooked grape must fermentation, respectively [4]. In the European Union, established limits for acidity are strictly specified. Thus, the acidity of wine vinegar (acetification obtained exclusively from wine) must be at least 6% w/v [5].
The fraction of metals which can actually be retained by the human body through vinegar consumption is related to the levels of metals in the harvest (primarily metals in grape juice and wine) as well as metal impurities due to manufacturing processes (chemicals added during production, materials used during transport, processing, or storage) [6] in addition to the bioavailability of metal species present in vinegar [7]. Metal bioaccessibility is affected by several natural mechanisms, among which complex formation is included. Additionally, due to hydrogen atom transfer and single-electron transfer, phenolic antioxidants protect against free radical formation by binding and/or inactivating metal ions [8,9,10]. Such a mechanism of antioxidant action is quite significant, despite the fact that the contribution of free radical scavenging or metal chelation to the overall antioxidant activity is still not fully specified [11].
It is well known that several toxic and/or biological effects of metals are attributed to their free or labile forms, which can actively interact with the binding sites of biological ligands [12,13]. The most labile form is the free dissolved metal ions, Mex+ (usually present as hydrated species), followed by dissolved inorganic metal ion pairs and complexes and organic complexes [14]. Differential pulse anodic stripping voltammetry (DPASV) is one of the few sensitive electrochemical techniques able to provide information on metal lability [15]. Typically, at low pH values, metal ions are present as the most labile species (as free ions or inorganic complexes) and are prone to different interactions [16].
Vinegars, depending on the raw material, origin, and type, are characterized by the presence of significant amounts of organic material composed by polyphenols, aminoacids, Maillard reaction endproducts, etc., prone to complexing metals and simultaneously representing the acidic matrix attributed to the presence of acetic acid. In such an environment, the study of metal complexation, for which available pertinent information is lacking, becomes challenging.
Due to the fact that vinegars—being a dilute acetic acid solution—accelerate rusting, their content of trace elements turns out to be of particular interest. The reaction of acetate with chemical species (moieties) present in rust and grimes changes their makeup, hence resulting in their dissolution into water [17,18]. Although there are numerous published works on the concentrations of metals in wine, only a few refer to metal concentrations in vinegar [3,6,19,20,21].
Therefore, the objectives of the present study were (a) to evaluate the occurrence of ligands prone to complexing Cu ions, thereby “buffering” the concentrations of free metal ions, in cases where pertinent available data are lacking and (b) to determine 16 trace element concentrations of vinegars retailed in Greece. The interaction of Cu chemical speciation with bioactive compounds present in vinegars is also discussed.

Organic carbon (OC) concentrations in the vinegar samples examined ranged from 17 to 278 mg L−1 (Table 1), with balsamic vinegars demonstrating a significantly higher, approximately 5-fold, median OC content (152 mg L−1) than common vinegars (30 mg L−1) (Mann–Whitney test, p<0.001). It is noteworthy that none of the common vinegars analyzed had an OC that exceeded 50 mg L−1, whereas in the balsamic vinegars, the lowest measured concentration was equal to 90 mg L−1 (Table 1).
The pH showed a slightly higher fluctuation in common vinegars (2.2–3.8; median 2.8) compared to balsamic vinegars (2.6–3.3; 3.0) (Table 1). Due to the acidity (low pH) of vinegars, the study of metal complexation becomes particularly interesting.

Differential pulse anodic stripping voltammetry (DPASV) was used for complexing capacity determinations [15]. The imposed experimental conditions on the electrode system were modulation time 0.04s, interval time 0.31 s, modulation amplitude 25 mV, and step potential 5 mV. The measurements were performed by direct titrations of the samples, to which the supporting electrolyte (NaCl) was added in the voltammetric cell with the standard addition of copper ions. The equilibration time of 15 min between the addition of copper ion and the measurement was proven adequate for attaining equilibrium in the sample. During the accumulation period in the cell a potential of −0.6V vs. Ag/AgCl reference electrode was applied, and copper ions were reduced on the electrode in the form of amalgam. In the oxidation step (stripping step) which follows, copper is oxidized from the amalgam, giving rise to a voltammetric peak, the height (current) of which is then used for the calculation of LT. The sensitivity of the method and the total amount of copper ions present were determined in the same way in the acidified (pH=2) sample solution, using a standard additions titration procedure.
When all ligands capable of complexing copper ions in the sample are saturated with the added copper ions, the slopes of the titration lines at natural pH and acidified samples become parallel and the approximate LT value is calculated by extrapolation of these titration lines to the x-axis. Exact values of copper complexing capacity (LT) as well as of corresponding apparent stability constants (Kapp) were calculated by applying the linear transformation plot through linearly transforming titration data, assuming 1:1 metal to ligand complexation [58,59]. The equation used for calculation is [Cu]/[CuL] = [Cu]/LT + 1/KLT, where Cu is the copper ion detected by anodic stripping voltammetry, CuL is the copper ion bound in a complex with ligand L, LT is the total concentration of binding ligands (complexing capacity), and K is the apparent stability constant. The plot of [Cu]/[LT] vs. [Cu] yields a straight line with a slope of 1/LT and an intercept of 1/KLT (Figure 4). The calculated repeatability (n =5) was found lower than 10%.

Total organic carbon (OC) was determined by high temperature catalytic oxidation employing a TOC-5000A Shimadzu analyzer (Shimadzu Scientific Instruments, Columbia, MD, USA). The precision was estimated as the standard deviation between injections and was less than 2% of the mean.
The pH of the samples was measured with a Jenway 3310 pH-meter (Jenway LTD, Felsted, Dunmow, Essex, UK).

The Kolmogorov–Smirnov and Shapiro–Wilk tests were used to assess the normality of data. Both tests gave p values less than 0.05 and the null hypothesis (that the data are normally distributed) was rejected. Therefore, the non-parametric tests Mann–Whitney U and Kruskal–Wallis were used to statistically compare values between two groups and more than two groups, respectively. Principal component analysis (PCA) was used in order to evaluate any data trends and gain an overview of the relationships among the trace metals examined. PASW Statistics for Windows, Version 24.0, was used as a statistical package (SPSS Inc, Chicago, IL, USA).

Metal chelation comprises, together with free radical scavenging and reducing capacity, the modes of antioxidant action exerted by plant phenolics. The organic matter in vinegars includes ligands such as polyphenols capable of complexing metal ions. pH is a factor which strongly influences metal complexation with organics. Due to the low acidity of vinegars, the study of metal complexation is of particular interest.
Copper complexing capacity (LT) was determined for the first time in 43 vinegars by differential pulse anodic stripping voltammetry (DPASV). Copper ions were not efficiently “buffered” by the organic matter, since in 21% of the samples, total Cu concentrations exceeded the corresponding LT values. The density of Cu ligands per mass unit of organic matter was found to be higher in balsamic vinegars originating from red grapes compared to those of herbal infusions, coffee brews, and beersas determined in previous studies. A positive correlation of LT values with the total phenolic content (TPC) of vinegar samples (R2 = 0.61, p < 0.05) was found.
Anthropogenic sources, such as the application of fertilizers, and plant protection practices in combination with technological manipulations (e.g., material used during transport, processing, or storage) seem to significantly contribute to the observed concentrations of Rb, Zn, Cd, Cu, Mn, Pb, and Cs in vinegars.

The authors would like to thank the anonymous reviewers for their valuable comments. 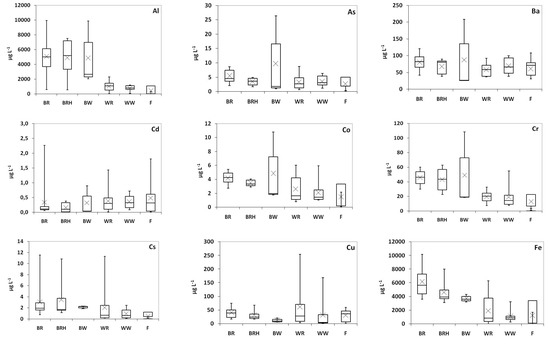 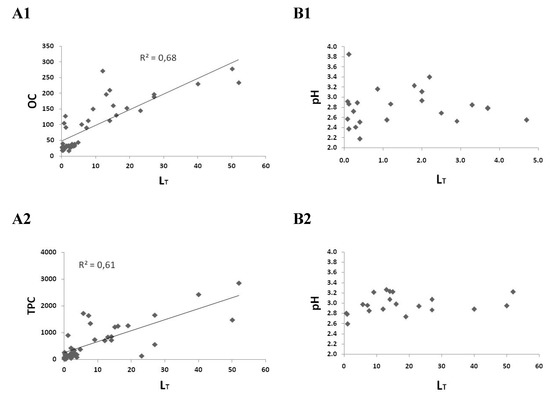