Glucosinolates are secondary plant metabolites of Brassicaceae. They exert their effect after enzymatic hydrolysis to yield aglycones, which become nitriles and epithionitriles through the action of epithiospecifier (ESP) and nitrile-specifier proteins (NSP). The mechanism of action of broccoli ESP and NSP is poorly understood mainly because ESP and NSP structures have not been completely characterized and because aglycones are unstable, thus hindering experimental measurements. The aim of this work was to investigate the interaction of broccoli ESP and NSP with the aglycones derived from broccoli glucosinolates using molecular simulations. The three-dimensional structure of broccoli ESP was built based on its amino-acid sequence, and the NSP structure was constructed based on a consensus amino-acid sequence. The models obtained using Iterative Threading ASSEmbly Refinement (I-TASSER) were refined with the OPLS-AA/L all atom force field of GROMACS 5.0.7 and were validated by Veryfy3D and ERRAT. The structures were selected based on molecular dynamics simulations. Interactions between the proteins and aglycones were simulated with Autodock Vina at different pH. It was concluded that pH determines the stability of the complexes and that the aglycone derived from glucoraphanin has the highest affinity to both ESP and NSP. This agrees with the fact that glucoraphanin is the most abundant glucosinolate in broccoli florets. View Full-Text
Keywords: broccoli; epithiospecifier protein; nitrile-specifier protein; aglycones; molecular docking broccoli; epithiospecifier protein; nitrile-specifier protein; aglycones; molecular docking
►▼ Show Figures 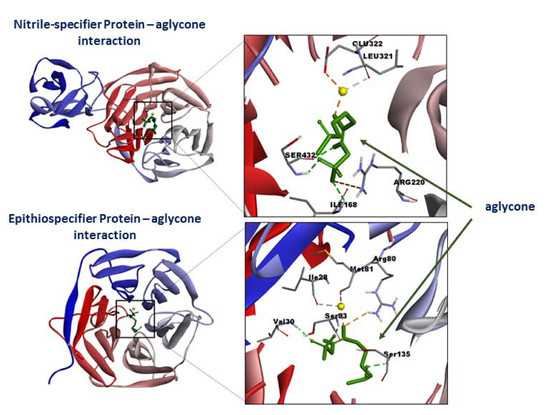 Román, J.; González, D.; Inostroza, M.; Mahn, A. Molecular Modeling of Epithiospecifier and Nitrile-Specifier Proteins of Broccoli and Their Interaction with Aglycones. Molecules 2020, 25, 772.


Román J, González D, Inostroza M, Mahn A. Molecular Modeling of Epithiospecifier and Nitrile-Specifier Proteins of Broccoli and Their Interaction with Aglycones. Molecules. 2020; 25(4):772.