Computational Methods for the Identification of Molecular Targets of Toxic Food Additives. Butylated Hydroxytoluene as a Case Study
Previous Article in Journal

:
Computer-aided drug design techniques are today largely applied in medicinal chemistry. In particular, receptor-based virtual screening (VS) studies, in which molecular docking represents the gold standard in silico approach, constitute a powerful strategy for identifying novel hit compounds active against the desired target receptor. Nevertheless, the need for improving the ability of docking in discriminating true active ligands from inactive compounds, thus boosting VS hit rates, is still pressing. In this context, the use of binding free energy evaluation approaches can represent a profitable tool for rescoring ligand-protein complexes predicted by docking based on more reliable estimations of ligand-protein binding affinities than those obtained with simple scoring functions. In the present review, we focused our attention on the Molecular Mechanics-Poisson Boltzman Surface Area (MM-PBSA) method for the calculation of binding free energies and its application in VS studies. We provided examples of successful applications of this method in VS campaigns and evaluation studies in which the reliability of this approach has been assessed, thus providing useful guidelines for employing this approach in VS.
Keywords:
virtual screening; MM-PBSA; rescoring; docking

The studies herein described were selected to provide the reader with a panoramic view of the evaluations and applications of the MM-PBSA methods in VS. Although, we are aware that the present review does not include a fully exhaustive report of all studies dealing with this topic ever performed, it still includes all recent performance assessments and successful application of the MM-PBSA method in VS, in which the main issues related to the calibration and use of this approach in different contexts are addressed.
In general, in the evaluations and VS studies herein described, the ligand-protein complexes subjected to energy minimizations and MD simulations, were enclosed into an explicit solvent water box, together with sodium or chloride counterions added (when necessary) to assure the neutralization of the system total charge. Nevertheless, in some evaluation studies reported here, different approaches have been used for treating the solvent in the minimization and MD calculations prior to MM-PBSA evaluations, as specified (vide infra). Both the explicit solvent molecules and ions are however removed in MM-PBSA calculations, which are performed considering the solvent (and also ions) implicitly, as a continuum. The use of alternative models of implicit solvent, such as the generalized Born models, affects the calculation of the polar solvation free energies, and thus the total binding free energy values, as well as the computation time required for the calculations.
An important parameter to be considered in binding free energy evaluations is the solute dielectric constant or internal dielectric constant (IDC), which also corresponds to the gas-phase state (normally equal to 1), in opposition to the dielectric constant of the solvent (normally equal to 80). Changing the value of the IDC corresponds to change the polarizability of the solute, which influences the electropolar contributions to the binding free energy. It was demonstrated that for proteins with considerably charged binding interfaces, which undergo a significant change in polarizability upon binding, the use of IDC values higher than 1, which reduces the electrostatic and polar solvation energy contributions to the overall binding free energy, allowed more reliable estimations of binding energies, especially when strong polar interactions with the corresponding ligands were observed [33]. Therefore, the choice of an IDC value appropriate for the system to be analyzed may represent an important issue to be addressed when planning to use MM-PBSA methods in VS studies. However, when MM-PBSA calculations are performed for systems containing receptors and/or ligands with total charge different from zero, achieving convergence of binding free energies can be very difficult, due to the large fluctuations that can occur during the MD simulations and due to the fact that uncertainty in the calculation of the solvation energy is proportional to the polarity of the considered molecules [34]. Moreover, it is known that a positive trivial correlation between the size of a ligand and its activity toward the target receptor may often occur in drug design. In this case the major contribution to the ligands binding affinities will be represented by the van der Waals or nonpolar terms, while the electrostatic or polar contributions may add just noise and even have a negative effect in the reliability of binding affinity predictions. In this case, an increase of the IDC value can reduce this effect and improve the reliability of the method.
In the studies herein presented, these and other issues related to the use of the MM-PBSA method in VS have been addressed. Moreover, in the present review we described various VS campaigns where the MM-PBSA method has been employed in association with molecular docking into protein X-ray structures and homology models, as well as in combination with other approaches, for the identification of novel ligands of different targets. These studies span a wide range of possible applications of MM-PBSA energy evaluations in VS, including the screening of focused libraries of drug-like compounds, molecular fragments, and peptide ligands, up to large databases of commercial compounds.

In the present review, we summarized the results of recent studies focused on the reliability analysis of ligand-protein binding energy evaluations based on the MM-PBSA method in VS. We provided examples of various VS studies in which this procedure has been profitably applied for the identification of novel ligands of different targets. What emerges from the different studies reviewed is that the use of binding free energy calculations for ranking and prioritizing compounds in VS studies can surely represent an effective approach that can statistically improve the screening performance with respect to simple docking studies. However, it seems that the benefits obtained by using this type of approach are rather influenced by both the target on which the VS is focused on and the virtual library of compounds to be screened. In particular, it seems that the features of the receptor binding site, and also the properties of the screened compounds, should be considered in the attempt to use the most appropriate protocol for performing energy evaluations for VS purposes. For this reason, a preliminary reliability assessment and case specific calibration of the protocol should be performed in order to obtain the best results from this approach in relation to the computation time required. Nevertheless, it seems that, especially when large compound databases are screened, energy evaluations can be safely performed on protein-ligand complexes subjected to simple energy minimizations or short MD simulations, as longer simulation times seem not to significantly improve the VS performance. Based on these considerations, large evaluation studies focused on a vast range of different protein targets would be desirable in order to better assess the domain of applicability of the MM-PBSA method in VS and to derive some guidelines relative to the best settings that should be used according to the type of target of interest. Moreover, although the performance of the MM-PBSA method has been compared to similar binding energy evaluation approaches, a large reliability assessment in comparison with different techniques, such as common scoring functions used in docking algorithms or even consensus scoring approaches, as well as recently emerging machine learning-based rescoring methods, is still missing. It would be necessary to understand if even less time consuming rescoring techniques could generate either similar or even better performance improvements. Finally, it should be considered that, due to the high computation time required, the entropic term of the binding energy is often not considered for MM-PBSA calculations and related approaches both in evaluation and application studies. However, when this term was included in the calculations, even with alternative approaches, it showed to provide an improvement of results. Therefore, we believe that the importance of the entropic term in binding free energy calculations should be evaluated in depth in order to assess its qualitative and quantitative impact on energy estimations and compound ranking, as well as to possibly identify some faster strategies able to either take into account entropy or compensate for its absence in the case that entropy is not considered. 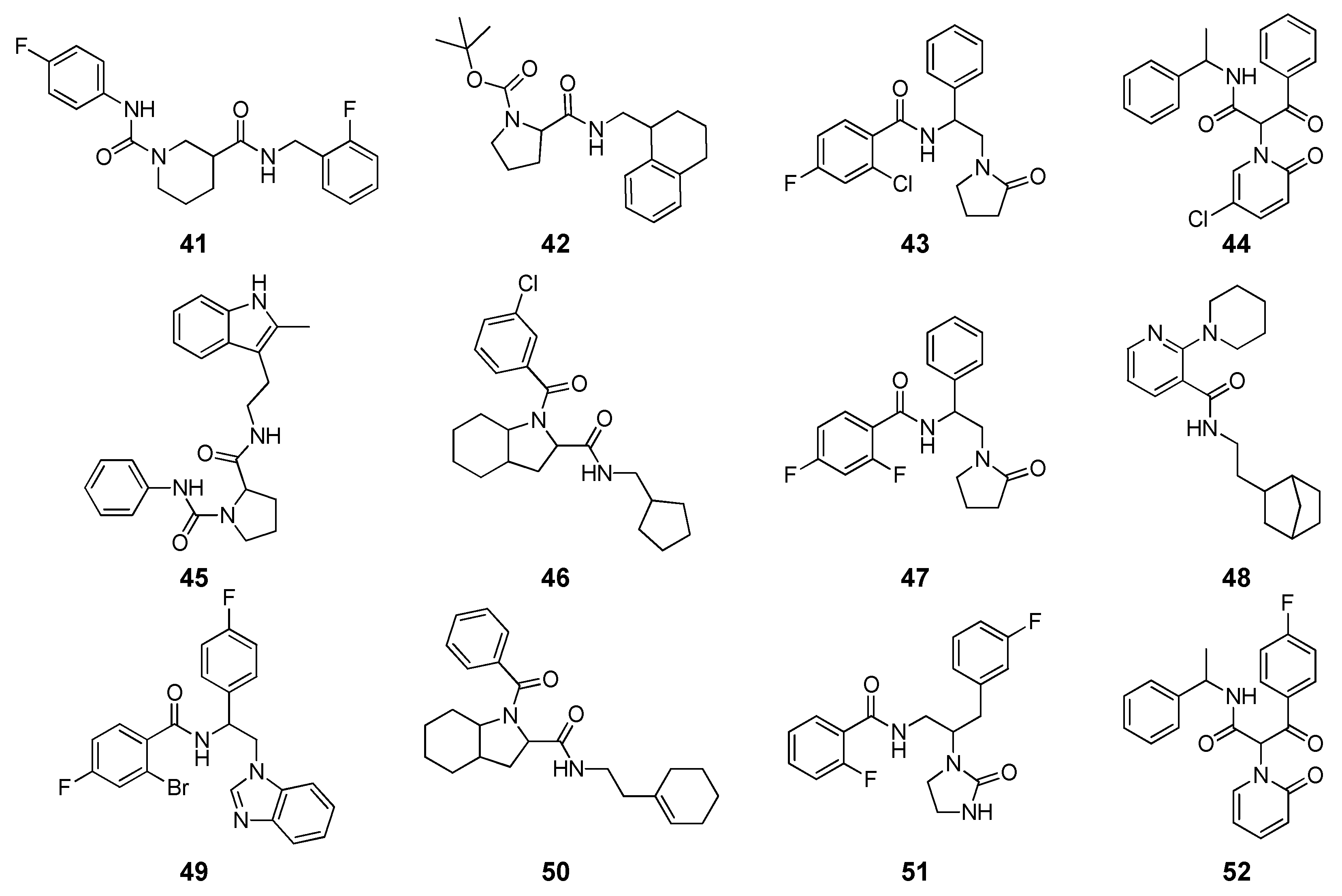