The advantageous properties of ethylene glycol diacetate (EGDA) qualify it as a useful substitute for glycerol triacetate (GTA) for various green applications. We scrutinised the lipase-mediated acetylation of structurally diverse alcohols in neat EGDA furnishing the range of naturally occurring fragrant acetates. We found that such enzymatic system exhibits high reactivity and selectivity towards activated (homo) allylic and non-activated primary/secondary alcohols. This feature was utilised in the scalable multigram synthesis of fragrant (Z)-hex-3-en-1-yl acetate in 70% yield. In addition, the Lipozyme 435/EGDA system was also found to be applicable for the chemo-selective acetylation of (hydroxyalkyl) phenols as well as for the kinetic resolution of chiral secondary alcohols. Lastly, its discrimination power was demonstrated in competitive experiments of equimolar mixtures of two isomeric alcohols. This enabled the practical synthesis of 1-pentyl acetate isolated as a single product in 68% yield from the equimolar mixture of 1-pentanol and 3-pentanol. View Full-Text
Keywords: enzymatic acetylation; green solvents; chemo-selectivity enzymatic acetylation; green solvents; chemo-selectivity
►▼ Show Figures 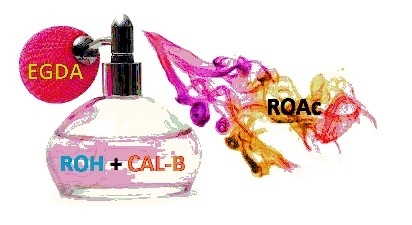