Self-assembling peptides are attracting wide interest as biodegradable building blocks to achieve functional nanomaterials that do not persist in the environment. Amongst the many applications, biocatalysis is gaining momentum, although a clear structure-to-activity relationship is still lacking. This work applied emerging design rules to the heterochiral octapeptide sequence His–Leu–DLeu–Ile–His–Leu–DLeu–Ile for self-assembly into nanofibrils that, at higher concentration, give rise to a supramolecular hydrogel for the mimicry of esterase-like activity. The peptide was synthesized by solid-phase and purified by HPLC, while its identity was confirmed by 1H-NMR and electrospray ionization (ESI)-MS. The hydrogel formed by this peptide was studied with oscillatory rheometry, and the supramolecular behavior of the peptide was investigated with transmission electron microscopy (TEM) analysis, circular dichroism (CD) spectroscopy, thioflavin T amyloid fluorescence assay, and attenuated total reflectance (ATR) Fourier-transform infrared (FT-IR) spectroscopy. The biocatalytic activity was studied by monitoring the hydrolysis of p-nitrophenyl acetate (pNPA) at neutral pH, and the reaction kinetics followed an apparent Michaelis–Menten model, for which a Lineweaver–Burk plot was produced to determine its enzymatic parameters for a comparison with the literature. Finally, LC–MS analysis was conducted on a series of experiments to evaluate the extent of, if any, undesired peptide acetylation at the N-terminus. In conclusion, we provide new insights that allow gaining a clearer picture of self-assembling peptide design rules for biocatalysis. View Full-Text
Keywords: biocatalysis; fibrils; hydrogel; self-assembly; supramolecular material; peptide; amyloid; histidine; D-amino acids; esterase biocatalysis; fibrils; hydrogel; self-assembly; supramolecular material; peptide; amyloid; histidine; D-amino acids; esterase
►▼ Show Figures 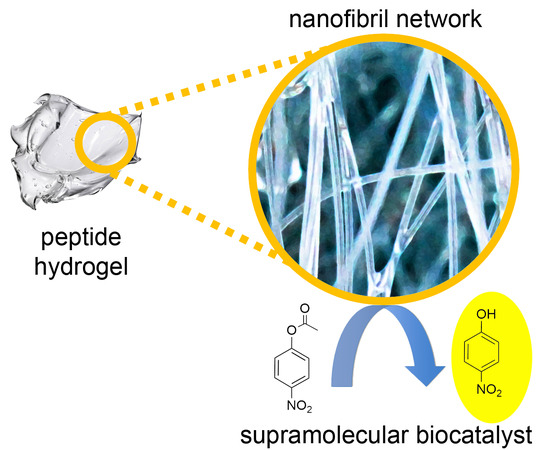