Photoexcitation of Ge9− Clusters in THF: New Insights into the Ultrafast Relaxation Dynamics and the Influence of the Cation
Next Article in Special Issue

The renewal of interest in industrial hemp (Cannabis sativa L.) launched new scientific research goals worldwide for its therapeutic, nutraceutical, and food applications [1,2,3]. Over time, hemp is reacquiring its role as green and sustainable crop, able to be a good alternative and ingredients resource for health foods, organic body care, biomaterials, and more [4]. Indeed, the hemp growing industrial market cannot disregard its diversity in chemical compounds, among which phytocannabinoids are the most described. These secondary metabolites phytochemically praise the uniqueness of Cannabis species, but also, in a puzzling scenario, dictated the denial of the plant use for almost 40 years of our history. The psychoactive/psychotropic Δ9-tetrahydrocannabinol (Δ9-THC or simply THC) was widely condemned as the guilty substance; nowadays, it is recognized as CB1 and CB2 partial agonist, whereas another abundant cannabinoid, namely cannabidiol (CBD), is identified as an “entourage compound”, able to modulate THC effects [5]. Indeed, Cannabis plant produces cannabinoids as prenylated aromatic carboxylic acids, which are converted in their more discussed neutral forms thanks to light, heat, or prolonged storage. In particular, on the basis of the concentrations of the main acidic cannabinoids, five Cannabis chemotypes occur. Chemotype I consist in drug-type plants for which the tetrahydrocannabinolic acid (THCA)/ cannabidiolic acid (CBDA) ratio is >>1.0, chemotype III describes plants whose aerial parts contain a THCA/CBDA ratio <<1.0, whereas an intermediate ratio corresponds to chemotype II. The high content of cannabigerolic acid (CBGA) is related to chemotype IV, and finally, chemotype V designates all the fiber-plants that completely lack cannabinoids [6].
The cultivation of industrial hemp varieties, which are approved by European Union, properly listed and with limited THC content, is augmenting the interest in the acidic derivatives. Cannabidiolic acid, which represents the main compound in fiber and seed-oil plants [7], is becoming a true protagonist, but its beneficial outcomes are still hidden and unexplored. Herein, the current knowledge on this overlooked molecule, whose bioactivity did not correspond to any great efforts to achieve its reliable purification, is briefly reviewed. Cannabidiolic acid (CBDA), which seems to share some several pharmacological features with its neutral analogue, could be favorably recovered by industrial hemp processing, and by the huge amount of its by-products and wastes.

2. CBDA and Its Biosynthesis

Cannabidiolic acid is a 22-carbon terpenophenolic compound and represents the main phytocannabinoid in the fiber and seed-oil hemp varieties [8]. The biosynthesis of this compound is through cannabidiolic acid synthase (CBDAS), a covalently flavinylated oxidase, which catalyzes the stereoselective oxidocyclization of cannabigerolic acid into CBDA [9].
CBDAS is an ancestral type from which tetrahydrocannabinolic acid synthase (THCAS) evolved [10,11,12]. Both CBDAS and THCAS belong to the family of berberine bridge enzyme-like enzymes [13]. Briefly, hexanoyl-CoA, which was found to be formed by an acyl-activating enzyme (AAE) in glandular trichomes [14], undergoes a Claisen-like condensation involving three malonyl-CoA nucleophiles. Thus, a tetra-β-ketide CoA is built up. This latter cyclizes to olivetolic acid (OA) by a α+β barrel (DABB) protein, properly called olivetolic acid cyclase (OAC) [15]. Prenylation (through a geranyl diphosphate from the 2-C-methyl-D-erythritol 4-phosphate; DOXP = 1-deoxy-D-xylulose 5-phosphate (MEP/DOXP) pathway) of olivetolic acid yields cannabigerolic acid (CBGA) by CBGA synthase [12]. CBGA can then undergo oxidative cyclization to achieve CBDA, THCA and/or cannabichromenic acid (CBCA) compounds. A schematic pathway is depicted in Figure 1. In particular, CBDA light- and/or heat-induced decarboxylation provides cannabidiol, recently defined as “a pharmacologic agent of wondrous diversity, an absolute archetypal dirty drug” [16].

4. CBDA: The King Compound in Industrial Hemp and Its (By)-Products

In recent years, Italy, as other European countries, was hit by the industrial hemp revolution. The food sector, more than others, has acquired the benefits of hemp cultivation, launching on the market products mostly deriving from the processing of hemp seed. Concurrently, the fear of the presence of possible contamination of edible products with cannabinoids, instead present in other parts of the plant, has given way to a whole series of analyses, also through the use of the most advanced techniques, to define the presence, the relative abundance, and the origin (e.g., leaf, florescence) of these substances during the processing [53,54,55]. Indeed, hemp seed oil contains, among its constituents, acidic cannabinoids, some of them highly oxygenated. Cannabidiolic acid is the most representative cannabinoid compound in hemp seed oil, and the CBDA/CBD ratio was proposed as a marker of storage conditions and production process [7]. Furthermore, the CBDA content could be particularly elevated in waste materials, as trimming materials or hemp pollen. Thus, based also on recent interest in the CBDA’s bioactivities, studies aimed at its isolation and purification have been carried out in order to obtain its high qualitative and quantitative "recovery". This need has prompted us to use multiple, combined, and alternative techniques that "simplify" the chemical composition of two different hemp-derived products, such as hemp seed oil and hemp pollen. Even in this case, there are few studies in the literature concerning the CBDA purification, where great attention is paid to the neutral analogue. It is noteworthy that identification studies in which liquid chromatography techniques coupled with DAD or MS detection are the masters [56,57], while there have been few real attempts to achieve the molecule’s purification.
Popp et al. [58] optimized the CBDA isolation procedures for the application of centrifugal partition chromatography (CPC—Fcpc (fast centrifugal partition chromatography) on an extract obtained by extraction with supercritical fluid (SEF); the fraction obtained by the CPC was further fractionated by liquid–liquid extraction. The use of centrifugal partition chromatography for cannabinoid isolation was previously reported [59]—the novelty of Popp’s study lies in the possibility of modulating the separation using the pH-zone-refining method. CPC is a counter-current liquid-liquid partitioning chromatographic technique in which the stationary phase is immobilized by centrifugal force, while the mobile phase is pumped at high flow rates. Sample components are divided between the mobile and stationary phases and are separated on the basis of the differences in their partition coefficients. CPC offers particular advantages in the isolation of compounds; there is no irreversible retention, it can cover a wide polarity scale, and has a very high capacity owing to the large stationary phase volume involved in the separation process. Another recent study by Brighenti et al. [54] did not approach the isolation, but used core-shell technology to optimize a chromatographic strategy for the separation of non-psychoactive phytocannabinoids in hemp extracts obtained with four different extraction procedures: ultrasound-assisted maceration, microwave-assisted extraction, maceration dynamics, and extraction with supercritical fluids. The advantages of core–shell technology lie in the fact that, compared with completely porous particles, the melt-core ones have a much shorter diffusion path owing to the solid core. This tends to reduce the axial dispersion of the solutes and minimize the peak widening. Looking back to the scientific literature of the 1970s, the existence of a manuscript entitled “Isolation of two constituents (cannabidiolic acid and tetrahydrocannabinolic acid) from Cannabis sativa L.” by preparative thin layer chromatography published was published in Annales Pharmaceutiques Françaises [60]. The manuscript, whose authors are Paris & el-Mounajjed, is in French and is not available online.

Cannabidiolic acid is an understudied compound right now. Its pharmaceutical and nutraceutical enforceability is still far from being achieved, but the high content of this compound in hemp varieties, cultivated for food purposes, suggests the need to further deepen knowledge of its chemical and biological features, as well as to fully and well exploit it. It is reasonable to state its content is massive in hemp wastes, such as pollen. In fact, the recovery of pollen from industrial hemp cultivars could represent an abundant source of non-psychoactive acid phytocannabinoids, of which cannabidiolic acid represents the main molecule. The use of "primitive" chromatographic techniques can represent, downstream of an alternative extractive approach with low environmental impact, an effective tool for obtaining the compound in good yield. In fact, the isolation and purification of the CBDA were carried out, starting from an extract enriched in phytocannabinoids by adopting "relatively" simple, fast, and inexpensive techniques such as direct and/or reverse phase thin layer chromatography. The relative abundance of this compound in hemp-based foods requires an effort by the scientific community to fully understand its action, in the presence and absence of similar lipophilic constituents such as the polyunsaturated fatty acids of which hemp oil is rich. Furthermore, the purification takes place, using it in the same way as expensive commercial standards, as an aid to the qualitative and quantitative analyzes aimed at quantifying its content in the various matrices obtained in the different stages of hemp processing, from cultivation to the formulation of food for human and animal consumption. Indeed, although the nutraceutical potential of this compound has not yet been defined, it is possible to hypothesize that its presence in hemp seed-based food products could provide benefits that go far beyond the known hemp seed high nutritional value. Moreover, the recovery of the compound from not-edible hemp parts could take advantage from its use as bioactive. It appears clear that there is still much to investigate, and other great efforts should be pursued. The main goal of this review was to pool actual CBDA knowledge together, for going on to acquire day by day new insights and new perspectives of bioanalysis for its future exploitation.

This study was supported by the grant “Programma VALERE 2019” from the University of Campania “Luigi Vanvitelli” (Head-on project). The authors are grateful to Hemp Farm Lab for providing hemp pollen. 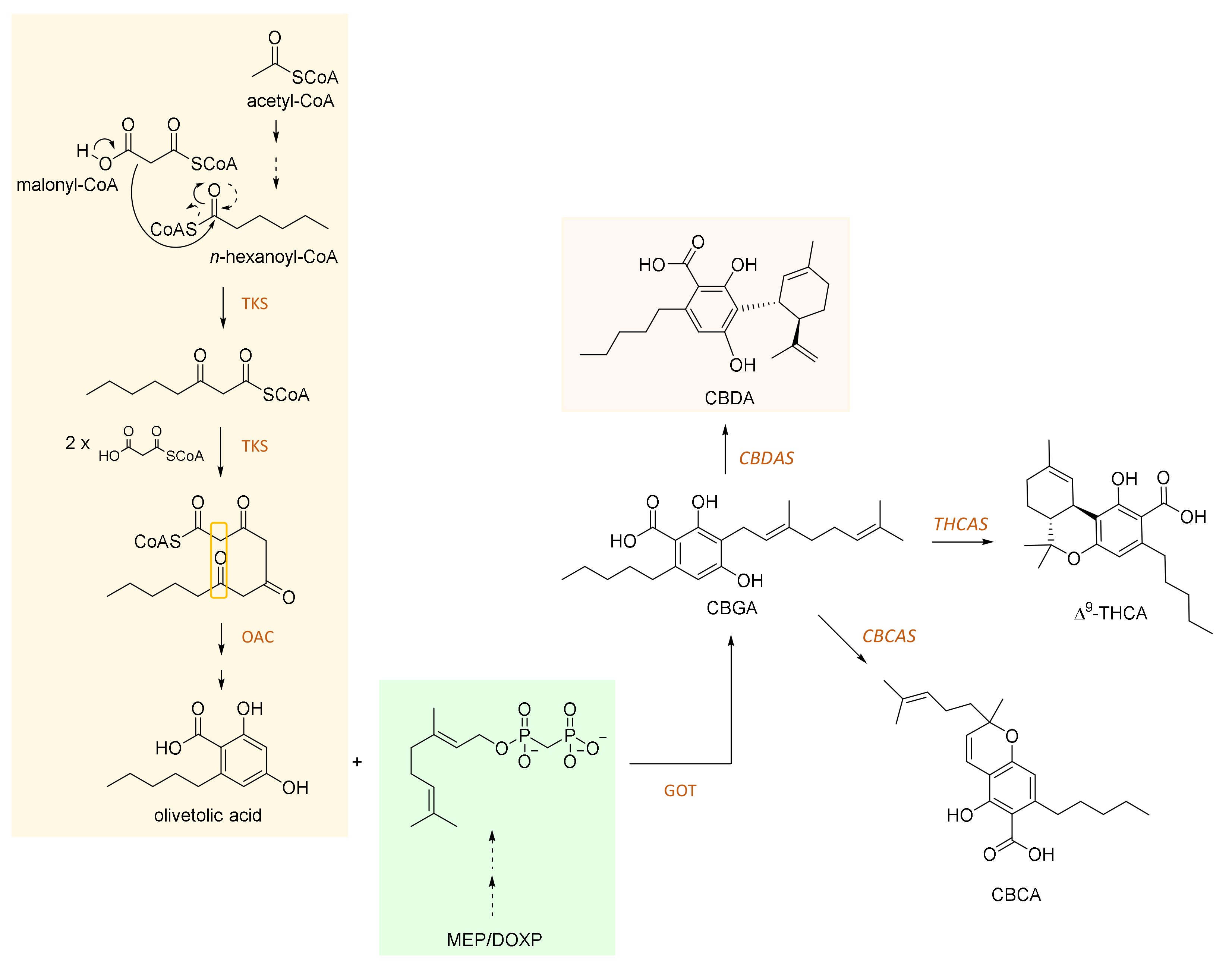 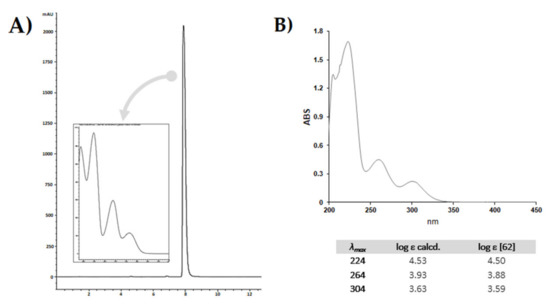 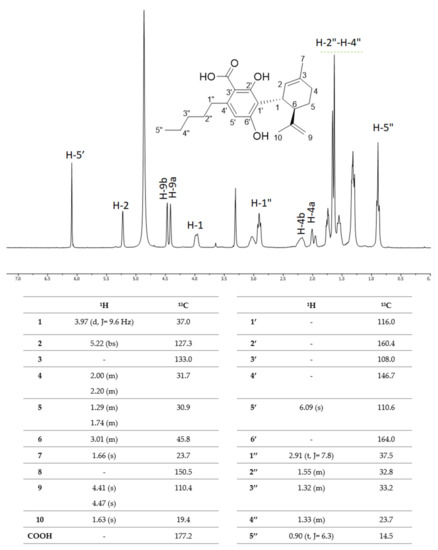 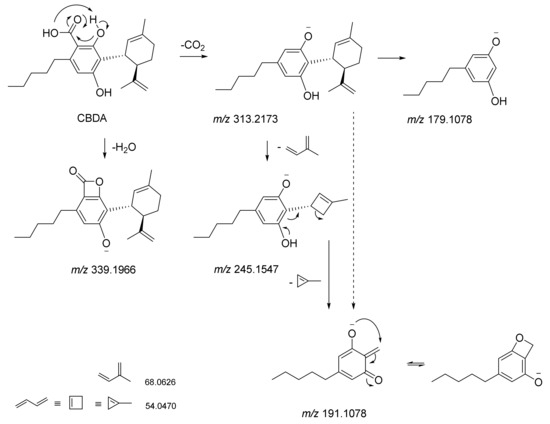