The intensification of pesticides exhibits a prompt threat to human health, while the gradual build-up of pesticides in the environment and the human body cause serious toxic effects [1,2]. Organophosphorus pesticides (OPs) are readily used worldwide to control public health and agricultural pests [3] and have a significant potential health hazard due to their acute or chronic poisoning [4]. Sumithion (SUM, O, O-dimethyl-O-(3-methyl-4-nitrophenyl) phosphorothioate) is a contact-acting-OP insecticide that is used against mites and insects on vegetables, rice, cereals, and cotton [5]. SUM is distinguished by a rapid and severe absorption in the digestive tract and a preferable aggregation in the liver and blood [6]. Previous studies have shown that SUM causes remarkable changes in several organs such as the kidneys, brain, reproductive organs, and liver [5,6]. Additionally, many reports revealed that OPs bind to DNA [7]. In turn, the DNA damage triggers a machinery response like MAPK, NF-κB, and p53 mechanisms that control genes associated with the metabolism of reactive oxygen species (ROS) and Ca+2 apoptosis and homeostasis [8]. Therefore, Vanova et al. [9] hypothesized that OPs’ phosphorylate proteins/low molecular antioxidants had a pro-oxidative effect.
Moreover, many experiments have reported that OPs affect many vital organs, such as chronic OP toxicity, which may cause extreme liver cell injury [10]. Endogenous antioxidant status, essential trace elements, and liver enzymes are negatively affected by chronic rat intoxication with OPs [11]. Besides, hematological parameters were considered to be a rapid bioindicator of toxicity after prolonged exposure to OPs including malathion [12]. To lessen the toxicity of pesticides, several approaches were attempted, including the intake of medicinal herbs and/or their natural constituents [13]. Honey as a natural product and bee products (propolis, wax, pollen, royal jelly) have caught researchers’ attention as a supplementary and alternate therapy due to their antioxidant properties [14,15,16]. Moreover, they were used as substances for treating wounds, burns, cancer, cardiovascular, gastrointestinal tract, and neurodegenerative disorders [17,18,19]. Propolis was reported as having an ameliorative activity against chlorpyrifos and profenofos toxicity by increasing the immune capacity by significantly increasing the immunoglobulins [20]. Honey at a dose of 1.2 g/kg increased the activity and amount of antioxidants like vitamin C, β-carotene, uric acid, and glutathione reductase in healthy people [21].
However, bee products are known as possible sources of natural antioxidants, which can combat oxidative stress because of their phenolic compound (phenolic acids and flavonoids) content that expresses a scavenging activity of free radicals [22]. Additionally, these phenolics, sugars, proteins, carotenes, amino acids, Maillard reaction products, organic acids, and other minor compounds participate in the antioxidant effects of honey and other bee products [23]. The proposed mechanisms include the sequestration of free, superoxide, and hydroxyl radicals, metallic ion chelation, and hydrogen donation [24,25].Therefore, the current research was planned to a) assess the effects of SUM oral administration for 28 successive days on the hematological, renal, hepatic, and oxidative toxicity of male white albino rats, b) investigate the ameliorative role of a bee products-based mixture (honey, propolis, palm pollen, and royal jelly) against possible SUM toxic effects, and c) discriminate the chemical constituents of the mixture using the gas chromatography-mass spectroscopy (GC-MS) technique.

Twenty-four healthy adult male albino rats (120 ± 5 g) were kept in an animal room at 25 ± 2 °C and in an alternate 12 h light and dark cycle. Two weeks before the experiment was conducted, the animals were allowed to acclimatize to the testing facility conditions. Afterwards, the rats were caged equally into four experimental groups, each consisting of six rats: control (corn oil), SUM (85 mg/kg, 1/20 LD50 [26]), HPPJ (a mixture of 22.5 g of citrus bee honey, 1 g of refined propolis, 1 g of palm pollen grains, and 0.5 g of fresh royal jelly), and SUM-HPPJ. The rats were orally treated with 1 mL of each treatment for 28 successive days. On the second day of the last therapy, all rats were euthanized using an anesthesia system containing diethyl ether, and blood samples were gathered from the carotid artery. All animals were treated in compliance with the standard guidelines for the laboratory animal care and use protocol of the National Research Council [27].

2.5. GC-MS Analysis of the HPPJ Mixture

Approximately 2 g of HPPJ mixture was soaked overnight in 10 mL of double-distilled water. Two milliliters of the extract were then filtered using a 0.2 μm PTFE filter (Fisher Scientific, Ottawa, Canada) and a 1 mL syringe to a 1.5 mL dark high-performance liquid chromatography (HPLC) glass vial. One μL of the sample was injected into an Agilent 6890 Gas Chromatography-Mass Spectrometry (GC-MS) system supplied with an Agilent mass spectrometric detector with a direct capillary interface and HP-5 capillary column (30 m × 0.250 mm × 0.25 μm film thickness, part No. 19091J-433). Helium was used as the carrier gas at a 1 mL/min flow rate and 3 min as a solvent delay time. The mass spectrophotometric detector was performed in a state of electron impact ionization, with 70 eV energy, 50 to 800 mass/charge (m/z) scanning state, and at 150 °C and 230 °C as the quadrupole and ion source temperature, respectively. The voltage of electron multipliers (EM voltage) was held at 1250 V above the auto-tune. Perfluorotributylamine (PFTBA) was used to manually tune the instrument. The GC temperature system was started for 3 min at 50 °C, then increased to 280 °C at a rate of 8 °C/min and kept for 10 min. The recorded m/z ratio is the fingerprint of each molecule. Additionally, the separated peaks were identified using the Wiley9 and NIST14 mass spectral database. Then, the detected compounds were individually re-confirmed via online chemical databases including AMDIS, PubChem, ChemSpider, and the Chinese Chemical database.

No mortality was recorded among the tested animals. The relative organ weights of the kidney, liver, heart, brain, spleen, testes, and lung were presented in Table 1. The SUM-treated rats showed significantly increased brain, kidney, and liver relative weights in contrast to the control group but did not vary remarkably from the group of rats that received SUM-HPPJ. Meanwhile, the SUM treatment did not affect the relative weight of the testes while it was decreased in rats that received SUM-HPPJ. Both the control and HPPJ treatments showed similar weights.

Our results showed a remarkable (P ≤ 0.05) decrease in RBCs, WBCs, and PLT counts, as well as hemoglobin (HGB), and MCHC contents, in SUM-intoxicated rats in comparison to the control (Table 2). The HPPJ- and SUM-HPPJ-treated rats showed similar HGB, MCV, MCH, and PLT results to those of the control group, although the SUM-treated rats had elevated MCV and MCH values (P ≤ 0.05) in relation to the other experimental groups. The HGB and MCHC contents of rats intoxicated with SUM were not substantially different from the control rats.

The results in Table 3 disclosed that the levels of glucose, uric acid, and creatinine in SUM-treated rats increased significantly (P ≤ 0.05) by 27.15%, 57.34%, and 199.85%, respectively, in comparison to the control. Additionally, SUM decreased the total protein and total lipids contents and the AChE enzyme activity by about 26.53%, 57.57%, and 37.20%, respectively. However, the SUM-HPPJ-treated rats showed a reduction in the total protein, total lipids, and AChE by 13.40%, 27.44%, and 13.42%, respectively, of the control values. Creatinine increased significantly after treating the rats with SUM-HPPJ. Experimental groups treated with HPPJ showed similar values of the biochemical parameters to those of the control (P < 0.05), except for the protein content, which decreased.

Our findings indicate that SUM caused remarkable damage to the kidney and liver, resulting in imbalances in their functions. Strikingly, the liver was the first organ affected by SUM uptake and may delayed the impact of SUM on the kidney due to pharmacokinetic conditions or to deficiencies in hepatic production of essential proteins, which allowed the weakened liver to affect other organs. It also caused harmful ROS production which produced oxidative stress. Oxidative stress conditions affected the weights of the kidney, body, and liver and changed their biochemical indicators. The present study was motivated by the possible health benefits of bee products including royal jelly, honey, and propolis, in addition to palm pollen grains. These products are extremely abundant in active ingredients, including phenolic compounds, phenolic acid, flavonoids, enzymes, and terpenes, which have biological roles in preventing several disorders and promoting good health. The present study revealed the preventive effect of honey and other bee products against liver injury, and a synergistic effect may be considered. The mechanism of action may be linked to the bee product’s antioxidant and anti-inflammatory function.

Authors have no funds to report.

The authors would like to thank the staff of Pesticides Residues Analysis and Toxicity Laboratory, Faculty of Agriculture, Damanhour University for conducting the chemical (GC-MS), and toxicological assays. 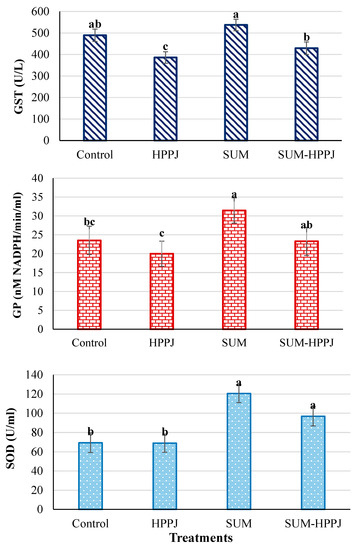 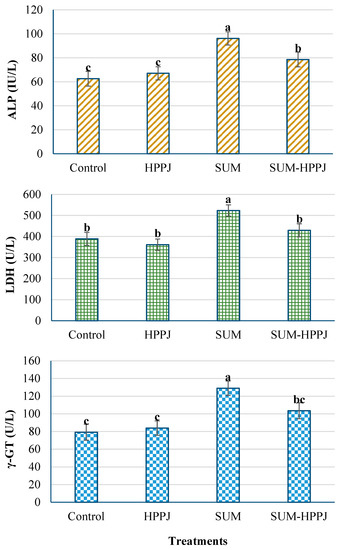