Cannabinoid Signaling in the Skin: Therapeutic Potential of the “C(ut)annabinoid” System

There is strong support for the role of the endocannabinoid system and the noncannabinoid lipid signaling molecules, N-acylethanolamines (NAEs), in cocaine reward and withdrawal. In the latest study, we investigated the changes in the levels of the above molecules and expression of cannabinoid receptors (CB1 and CB2) in several brain regions during cocaine-induced reinstatement in rats. By using intravenous cocaine self-administration and extinction procedures linked with yoked triad controls, we found that a priming dose of cocaine (10 mg/kg, i.p.) evoked an increase of the anadamide (AEA) level in the hippocampus and prefrontal cortex only in animals that had previously self-administered cocaine. In the same animals, the level of 2-arachidonoylglycerol (2-AG) increased in the hippocampus and nucleus accumbens. Moreover, the drug-induced relapse resulted in a potent increase in NAEs levels in the cortical areas and striatum and, at the same time, a decrease in the tissue levels of oleoylethanolamide (OEA) and palmitoylethanolamide (PEA) was noted in the nucleus accumbens, cerebellum, and/or hippocampus. At the level of cannabinoid receptors, a priming dose of cocaine evoked either upregulation of the CB1 and CB2 receptors in the prefrontal cortex and lateral septal nuclei or downregulation of the CB1 receptors in the ventral tegmental area. In the medial globus pallidus we observed the upregulation of the CB2 receptor only after yoked chronic cocaine treatment. Our findings support that in the rat brain, the endocannabinoid system and NAEs are involved in cocaine induced-reinstatement where these molecules changed in a region-specific manner and may represent brain molecular signatures for the development of new treatments for cocaine addiction. View Full-Text
Keywords: cocaine reinstatement; cannabinoid receptors; endocannabinoids; immunohistochemistry; LC-MS/MS method; N-acylethanolamines; relapse cocaine reinstatement; cannabinoid receptors; endocannabinoids; immunohistochemistry; LC-MS/MS method; N-acylethanolamines; relapse
►▼ Show Figures 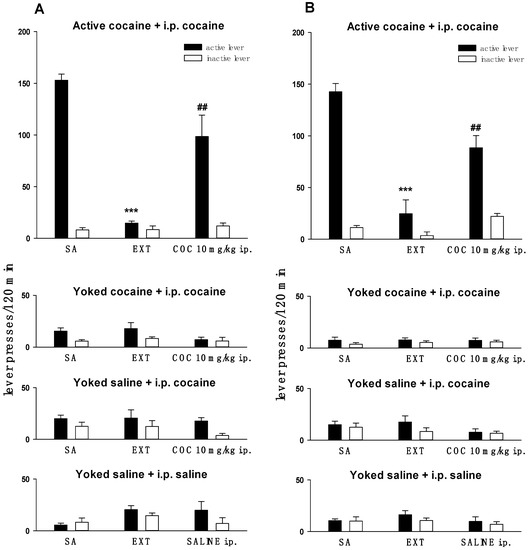