Preparation of Sesquiterpene Lactone Derivatives: Cytotoxic Activity and Selectivity of Action
Next Article in Special Issue

In Vitro Infant Faecal Fermentation of Low Viscosity Barley β-Glucan and Its Acid Hydrolyzed Derivatives: Evaluation of Their Potential as Novel Prebiotics

Garlic (Allium sativum L.) has been used as a spice and traditional medicine for centuries. Many studies have shown that garlic has numerous beneficial effects for human health including antioxidant, anti-inflammation, anti-cancer, lipid regulation, reduction of blood pressure, and improvement of blood glucose control [1,2,3,4,5,6]. Additionally, garlic and its derivatives exhibit hepatoprotective effects against alcoholic hepatic injury, drug-induced hepatic injury, fibrogenic liver disorders, etc. [7]. For instance, to improve hypoglycemic and hypolipidemic activities, taking 350 mg/kg body weight of garlic extract can significantly decrease the levels of blood glucose, triglycerides, and cholesterol in diabetic rabbits [8]; for the hepatoprotective effect, male albino rats treated with heated garlic juice at 100 mg/kg/day for four weeks could suppress hepatic oxidative stress via the Nrf2/Keap1 pathway [9].
However, the consumption of unprocessed raw garlic is limited due to its characteristic odor and spicy taste, causing the gastric mucosal cells injury with excessive intake [10]. Fermented black garlic, a kind of heat processed garlic, has been reported for its biological activities such as anti-cancer activity, anti-obesity activity, hepatoprotective activity, and anti-inflammatory activity [1,6]. For anti-cancer activity, 100 mg/mL age black garlic (ABG) extract could induce apoptosis in human gastric cancer cells (SGC-7901) [11]; for anti-obesity activity, the mice given 400 mg/kg BG significantly decreased in body weight, abdominal fat weight, abdominal adipocyte diameters, and abdominal fat pad thickness [12]; and 200 mg/kg ABG demonstrated hepatoprotective activity by decreasing ALT and AST levels in the liver of Sprague–Dawley rats [13]. Nevertheless, knowledge of the ingredients or compounds possessing those bioactivities remains unclear.
In our previous study, five solvents (n-hexane, dichloromethane, ethyl acetate, n-butanol, and water) were used to separate compounds with different polarity in black garlic [1]. Results showed that black garlic promoted gastrointestinal motility mainly in the n-butanol and water fractions. In this study, a similar system was adopted to evaluate whether black garlic extracts may have a hepatoprotective effect.

According to the previous study, we found extremely a low extraction efficiency of n-hexane and dichloromethane (extraction rates: water > n-butanol > ethyl acetate > dichloromethane > n-hexane) [1]. However, which components of black garlic exhibit a hepatoprotective effect have never been investigated. Thus, our study was designed to use the three fractions of ethyl acetate layer extract (EA), n-butanol layer extract (BA), and water layer extract (WS) to assess the conditions of hepatoprotection in vivo serum AST and serum ALT level, as shown in Figure 1, by using silymarin as a positive control group, which is now widely used to treat hepatic injury. The carbon tetrachloride (CCl4) group exhibited a significant increase in AST, ALT, and alkaline phosphatase (ALP), leading to severe hepatic injury. However, the increase of ALT and AST levels were significantly inhibited by treatment with BA and WS. There were no significant differences in the EA group. These results suggest that the different extraction solutions of black garlic provided protective properties against CCl4-induced hepatic injury.

To evaluate the major pathological changes based on the increased vacuolization, inflammation, and coagulated necrosis, four grades were categorized in order to present the level of hepatic injury. The hepatic histological results are shown in Figure 2. Hepatic injuries were reduced by treatment with BA and WS (0.2 and 0.5 g/kg) (Figure 2D–G) and the histological index of vacuolization and hepatocellular necrosis of the liver were significantly decreased. Our histological outcome also demonstrated that treatment with BA and WS significantly ameliorated CCl4-induced hepatic injury.

GSH is an important non-enzymatic antioxidant compound. Oxidizing GSH to glutathione disulfide (GSSG) will reduce hydrogen peroxide, hydroperoxide, and xenobiotic toxicity. The effects of black garlic extract on GSH levels are shown in Figure 5. CCl4 treatment led to a significant reduction of GSH level when compared to the normal group (p < 0.001). However, the GSH levels were increased significantly by treatment with WS at 0.2 g/kg (p < 0.05) and 0.5 g/kg (p < 0.001), BA (0.2 and 0.5 g/kg) (p < 0.05), along with silymarin at 200 mg/kg (p < 0.01).

CAT, SOD, GSH-Px, and GSH-Rd were measured to access the antioxidant effects of black garlic extract. The hepatic enzyme activities of the CCl4 group was significantly lower than that of the control group (Figure 6). Treatment with BA and WS at doses of 0.2 g/kg and 0.5 g/kg and silymarin at a dose of 200 mg/kg increased the levels of SOD, GSH-Px, GSH-Rd, and glutathione S-transferase (GST) activity. However, BA at doses of 0.2 g/kg did not significantly increase the levels of CAT.

ICR mice (20–25 g; 8 weeks) were purchased from Bio LASCO Taiwan Co. Ltd. (Taipei, Taiwan). These were placed in a standard cage with a relative humidity of 55 ± 5%, a 12 h/12 h light dark cycle, and a constant temperature of 21 ± 2 °C for at least one week and fed food and water ad libitum. All animal procedures were conducted in accordance with the standards set forth in the guidelines for the Care and Use of Experimental Animals by the Committee for the Purpose of Control and Supervision of Experiments on Animals and the National Institutes of Health. The protocol was approved by the Committee on Animal Research, Da-Yeh University, under code 104007. The black garlic was provided by All Wealth Biotech Co. Ltd. (Xiamen, China). All of the other chemicals used in these studies were of analytical grade and obtained commercially.

The black garlic was chopped, weighed, and extracted by solvents with different polarities in the following sequence: n-hexane, dichloromethane, ethyl acetate, n-butanol, and distilled water [1]. First, black garlic was extracted by five times volume of n-hexane, and filtrated with filter paper (90 mm diameter) after the extraction of n-hexane; this step was repeated three times. When the first-round extraction was completed, the solvent was changed to dichloromethane for continued extraction, with the steps of extraction as previously described; the process was continued according to this regular procedure and five different extract solutions were obtained. The partition extraction rate (E) was calculated as follows (Equation (1)): where Vt is the different polar solvents extract weight, and Ct is the sample (before extraction) weight.

Experimental animals were randomly divided into 8 experimental groups (10 mice per group). Mice in the control group and CCl4 group were fed with distilled water. Silymarin was orally administered in the mice in the silymarin group (200 mg/kg in 1% carboxymethylcellulose), while mice in the EA groups, BA groups, and WS groups were orally administered a fractional extract of black garlic (0.2 g/kg and 0.5 g/kg) for seven consecutive days. One hour after the last administration of the experimental reagent, CCl4 (10 mL/kg, 0.2% in olive oil) was injected intraperitoneally into each group of mice, except for the normal control group. The control mice received an equivalent volume of olive oil (i.p.) [40].

4.4. Preparation of Blood and Liver

Twenty-four hours after the CCl4-injection, mice were sacrificed under anesthesia. Blood was collected for the evaluation of the biochemical parameters (AST, ALT). The right lobe of the liver was resected and fixed with 4% paraformaldehyde and embedded in paraffin for histological analysis; other hepatic tissue were diluted by saline (1:1), homogenated, and centrifuged. The supernatant was then taken as the homogenate hepatic sample, and stored at −80 °C in order to analyze the activity of a series hepatic enzyme [41].

Blood samples were collected from the mice and coagulated under room temperature for 1 h. The plasma was prepared by centrifugation at 3000 rpm, 4 °C for 10 min. An auto-analyzer (Hitachi 7060, Hitachi, Tokyo, Japan) was used to analyze and determine the AST and ALT [42].

All mice were sacrificed. One piece of liver tissue (1 × 1 × 1 cm3) was cut from the largest right lobe, and fixed with formalin and processed with hematoxylin-eosin (H & E) staining for histological preparation to evaluate the hepatic damage [42].

Thiobarbituric acid reactive substance (TBARS) content was analyzed to assess the MDA level. [39]. MDA is a naturally occurring product of lipid peroxidation. Briefly, MDA reacted with thiobarbituric acid at high temperature under an acidic condition and presented a red-complex TBARS. The TBARS was determined colorimetrically at 532 nm.

Liver homogenate (50 µL) of each sample was mixed with 10% trichloroacetic acid (TCA) (50 μL) and then placed on ice. After centrifugation (10,000 g for 5 min), the supernatant (330 µL) was taken and normal saline (600 µL), along with 5,5′-dithio-bis-(2-nitrobenzoic acid) (DTNB) (125 µL) were added and mixed well. The absorbance was read at 412 nm. The standard curve was established using glutathione. The concentration of GSH was expressed as μmol/g protein in the sample [18,42].

Liver homogenates were prepared by using a homogenizer to determine CAT, SOD, GSH-Rd, and GSH-Px activities. These antioxidant enzymatic activities were determined using the kits (Randox Laboratories Ltd., Crumlin, UK) according to the manufacturer’s instructions and detected with the Chem Well®-T Automated Chemistry Analyzer (Wicklow, Ireland). The CAT results were expressed in units per milligram of protein (nmol/mg protein), along with the results of SOD, GSH-Px, and GSH-Rd expressed in units per milligram of protein (U/mg protein) [43].

4.11. Quantification of SAC in Black Garlic

The black garlic samples (5 ± 0.5 g) were added to 50 mL distilled water. The mixture was extracted by ultrasonic processing for 10 min. The processed solution was filtered through 0.45 μm and 0.22 μm syringe filters. The filtered samples were subjected to HPLC with an ultraviolet detector (L-7400, Hitachi, City, Japan). Separation of the sample was conducted with a C18 column (250 mm × 4.6 mm ID, 5 μm; Waters). The flow rate was 0.6 mL/min, the sample injected velum was 10 μL, and the detecting wavelength was 210 nm. The solvent system consisted of distilled acetonitrile and water (12:88, v/v) [44,45].

Values were expressed as mean ± standard deviation (SD). To evaluate the differences between the groups studied, one-way analysis of variance (ANOVA) with Scheffe’s multiple range post hoc tests was used. A non-parametric (Kruskal–Wallis’s test) followed by a Mann–Whitney U-test was used to determine the statistical differences among the groups for histopathological analysis. Differences were considered statistically significant at a p-level of 0.05. 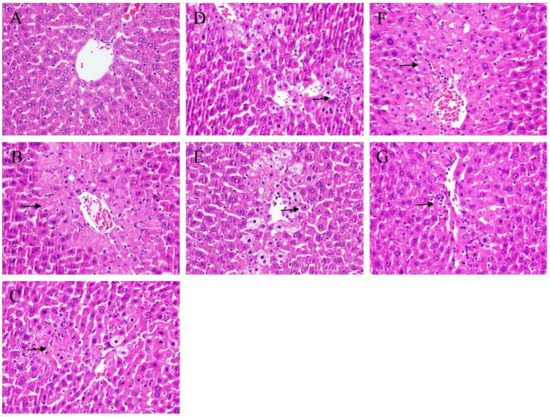 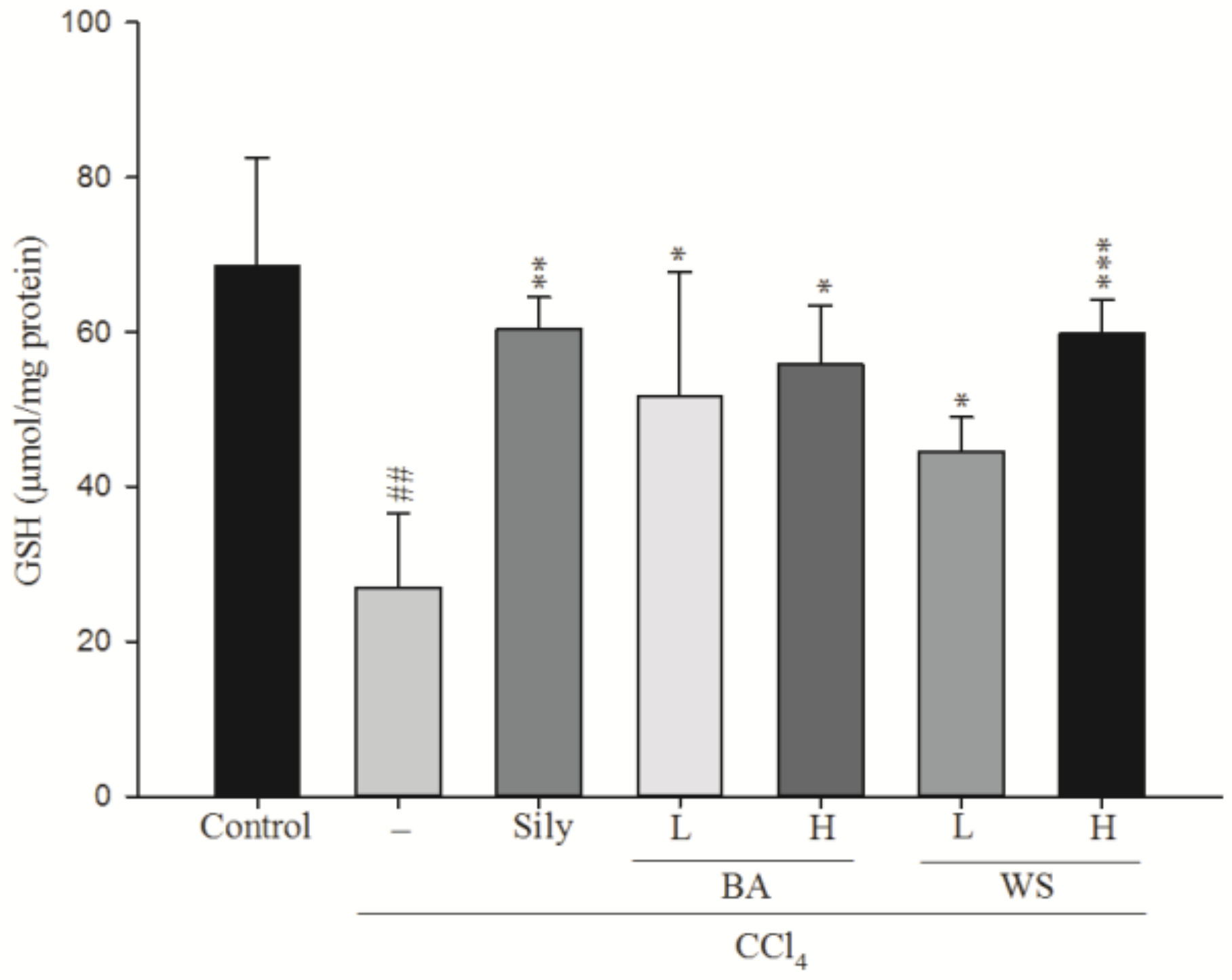 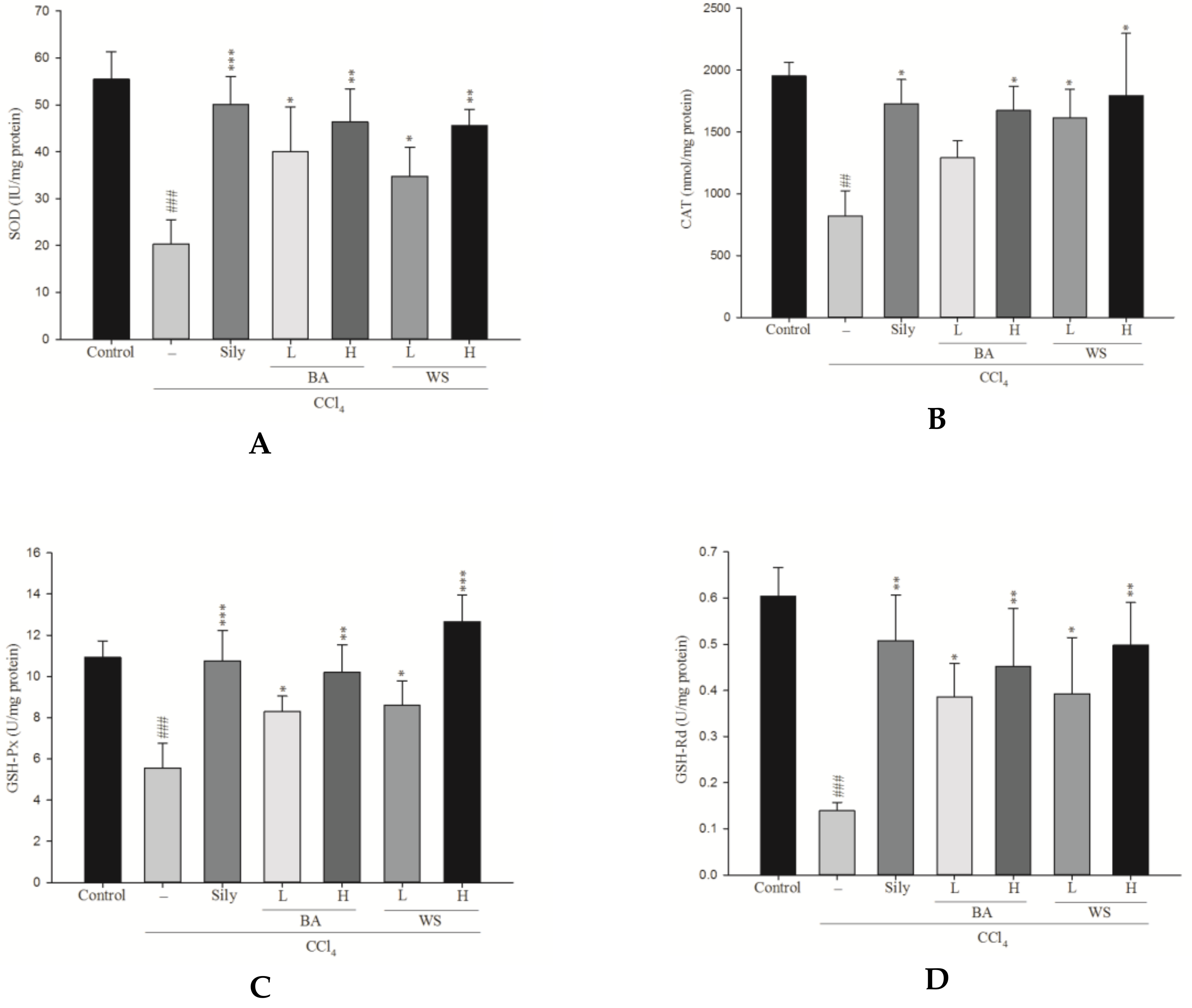