The nuclear receptor, estrogen-related receptor alpha (ERRα; NR3B1), plays a pivotal role in energy homeostasis. Its expression fluctuates with the demands of energy production in various tissues. When paired with the peroxisome proliferator-activated receptor γ coactivator 1α (PGC-1α), the PGC/ERR pathway regulates a host of genes that participate in metabolic signaling networks and in mitochondrial oxidative respiration. Unregulated overexpression of ERRα is found in many cancer cells, implicating a role in cancer progression and other metabolism-related diseases. Using high throughput screening assays, we screened the Tox21 10K compound library in stably transfected HEK293 cells containing either the ERRα-reporter or the reporter plus PGC-1α expression plasmid. We identified two groups of antagonists that were potent inhibitors of ERRα activity and/or the PGC/ERR pathway: nine antineoplastic agents and thirteen pesticides. Results were confirmed using gene expression studies. These findings suggest a novel mechanism of action on bioenergetics for five of the nine antineoplastic drugs. Nine of the thirteen pesticides, which have not been investigated previously for ERRα disrupting activity, were classified as such. In conclusion, we demonstrated that high-throughput screening assays can be used to reveal new biological properties of therapeutic and environmental chemicals, broadening our understanding of their modes of action. View Full-Text
Keywords: ERRα; endocrine disruption; bioenergetic signaling pathways; mechanism of action; cancer ERRα; endocrine disruption; bioenergetic signaling pathways; mechanism of action; cancer
►▼ Show Figures 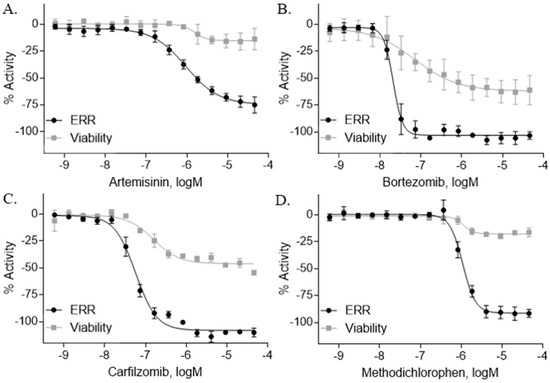