Amylase and Xylanase from Edible Fungus Neurospora intermedia: Production and Characterization
Next Article in Special Issue

Bioactivity Profile of the Diterpene Isosteviol and its Derivatives 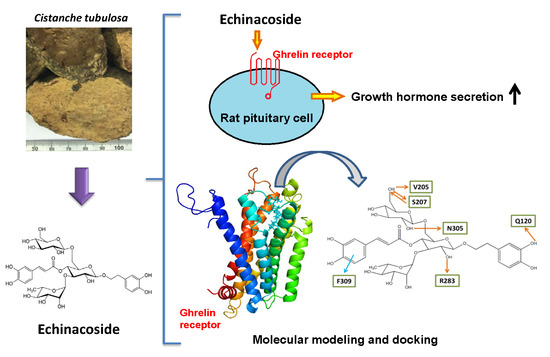 Cistanche species (Orobanchaceae), the so-called ginseng of the desert, is a holoparasitic plant found in the desert region of northwestern China. This herbal medicine has been recorded to possess several biological activities such as constipation relief, longevity, and aphrodisiac properties in traditional Chinese pharmacopoeia [1]. Different species of Cistanche are commonly named according to their hosts and growing environments, such as Cistanche deserticola Y.C. Ma and Cistanche tubulosa (Schenk) R. Wight. C. deserticola, hosted by Haloxylon ammodendron mainly found in Inner Mongolia, was originally regarded as the standard Cistanche source in Chinese Pharmacopoeia, but has been listed as an endangered plant species in China since 1984. C. tubulosa, hosted by Tamarix ramosissima grown in Xinjiang Hetian, tends to possess a fast growth rate, and thus agricultural cultivation of this species leads to a much better yield than the traditional C. deserticola. Nowadays, both of the above two species are collected in the Chinese Pharmacopoeia [2].
C. deserticola and C. tubulosa are found to possess similar chemical constituents and pharmacological activities, thus both of them are regarded to be potential herbal medicine for aging-related diseases [3,4,5]. Phenylethanol glycosides are common active ingredients found in these two species, and echinacoside is identified as the major phenylethanol glycoside in C. tubulosa [6]. In the past decade, echinacoside and the extract of C. tubulosa rich in echinacoside were demonstrated to possess many pharmacological activities, such as anti-aging, neuroprotection, enhancement of learning and memory, improvement of cardiac function, reduction of hyperlipidemia and hyperglycemia, and prevention of obesity-induced diabetes and metabolic syndrome [7,8,9,10,11,12].
Known as the “hunger hormone”, ghrelin is a peptide hormone composed of 28 amino acid residues in which the third serine residue is acylated with an n-octanoyl group essential for its biological functions [13]. Ghrelin has been demonstrated to be an endogenous ligand for a G-protein-coupled receptor named growth hormone secretagogue-1a receptor (GHS-R1a), which is mainly expressed in the hypothalamus and the pituitary gland [14]. Activation of GHS-R1a by ghrelin results in the stimulation of growth hormone secretion and the regulation of several physiological reactions [15]. Clinical studies show that exogenous supplementation with growth hormones could alleviate the symptoms of aging-related diseases in the elderly, such as increasing muscle strength and bone density and improving sleeping quality and cognitive ability [16,17]. However, concerns of serious side effects (e.g., prostate cancer, joint pain, insulin resistance, fluid retention, carpal tunnel syndrome, and gynecomastia) have been brought up for the treatment with exogenous growth hormones [18,19]. Therefore, the stimulation of growth hormone secretion by ghrelin via GHS-R1a activation has been considered as an alternative therapeutic approach for the aging-related diseases of the elderly, and its therapeutic effect is assumed to be superior to exogenous supplementation of growth hormone.
Recently, teaghrelins and ginkgoghrelins, unique acylated flavonoid glycosides found in Chin-shin oolong tea and Ginkgo biloba L. (Ginkgoaceae) leaves, were demonstrated to induce growth hormone secretion of rat primary anterior pituitary cells via binding to the ghrelin receptor [20,21,22]. Considering the therapeutic effects of Cistanche spp. on aging-related diseases were similar to the anti-aging effects of Chin-shin oolong tea and Ginkgo biloba leaves, we wondered whether the pharmacological activities of phenylethanol glycosides could be executed via the same pathway as those of teaghrelins and ginkgoghrelins by binding to the ghrelin receptor. Firstly, three phenylethanoid glycosides—echinacoside, tubuloside A, and acteoside—were identified in the water extract of C. tubulosa. The major constituent, echinacoside, was further purified and examined for its capability for stimulating growth hormone release of rat pituitary cells via activation of the ghrelin receptor. Molecular modeling of echinacoside, tubuloside A, and acteoside docking to the ghrelin receptor was performed and compared for the possible interactions within the binding pocket.

2.1. Separation and Identification of Three Major Phenylethanol Glycosides in the Water Extract of Two Cistanche Species

2.2. Effect of Echinacoside on the Induction of Growth Hormone Secretion in Rat Pituitary Cells

2.3. Molecular Docking of Echinacoside, Tubuloside A, and Acteoside to the Ghrelin Receptor

4.2. HPLC/UV and LC−MSn Analyses of the Water Extraction of Cistanche spp.

The water extract from dried stem (25 g) of C. tubulosa was concentrated under reduced pressure to give deep brown syrup. The crude extraction was suspended with distilled water and lyophilized by a freeze dryer. The powder of 100 mg was resolved in distilled water of 5 mL and subjected to purification using Sephadex LH-20 column (100 mL; GE Healthcare Bio-Sciences AB, Sweden) eluted with 10% aqueous methanol solution and monitored by HPLC. The fractions containing echinacoside were detected by reading the absorbance at 245 nm and harvested by using an autosampler.

The experiments were approved by the Institutional Animal Care and Use Committee of the National Chung−Hsing University with the approval number of IACUC 106-079. Male Sprague−Dawley rats weighing 250−300 g were purchased from BioLASCO, Taiwan Co., Ltd. (Taipei, Taiwan). Two animals per cage were maintained in a controlled environment of 23 ± 2 °C, 60 ± 10% humidity, and 12 h light/dark cycle. The rats were fed with a standard chow diet (calories provided by 28.7% protein, 13.4% fat, and 57.9% carbohydrate, 5001 Rodent LabDiet, St. Louis, MO, USA) and distilled water ad libitum.

The primary anterior pituitary cells of 4 × 104 cell/well were cultured at 37 °C under 5% CO2 for 2 days prior to the growth hormone secretion assay according to the protocol described previously [30]. After the removal of culture medium, cells were starved in serum-free Dulbecco’s Modified Eagle’s medium (DMEM) for 90 min to stabilize basal hormone secretion. The starvation medium was replaced with fresh DMEM containing echinacoside (from 10−8 to 10−5 M) or GHRP-6 (agonist of a human ghrelin receptor, GHSR, 10−7 M) as a positive control, and cells were incubated for 15 and 30 min at 37 °C under 5% CO2. For detection of antagonist effect, the cells were incubated with a GHSR inverse agonist, [D-Arg1, D-Phe5, D-Trp7,9, Leu11]-substance P (0.5 μM), and then treated with DMEM containing echinacoside (10−5 M) or GHRP-6 (10−7 M) for 30 min. The medium was collected for determination of growth hormone secretion by a rat growth hormone ELISA kit (Shanghai Sunred Biological Technology Corporation).

The data were presented as mean values ± SD. The differences were analyzed by T Test. Statistical calculations were performed by GraphPad Prism 6 (GraphPad Software Inc., La Jolla, CA, USA). A level of p < 0.05 was considered to be statistically significant.

Homology modeling and docking to a human ghrelin receptor, growth hormone secretagogue receptor (GHSR, accession number AAI13548), was established by following our previous construction [21,24]. Briefly, crystal structures of β1 and β2 adrenergic receptors (PDB 2YCY and 3PDS) with bound ligands, cyanopindolol, and FAUC50 were used as templates to construct the GHSR structure [31,32]. The GHSR structure with the lowest PDF total energy was selected for further docking with GHRP-6, echinacoside, tubuloside A, and acteoside. All modeling processes were performed using the Discovery Studio 2.1 platform (http://accelrys.com/).
The 3D structure of GHRP-6 was downloaded from the Pub-Chem compound database on the NCBI website (http://www.ncbi.nlm.nih.gov/). The 3D structures of echinacoside, tubuloside A, and acteoside were built using the Chem3D program (http://www.cambridgesoft.com/). The ligand binding site of GHSR was defined as the spherical space with a 14 Å radius from the center of the binding pocket in the docking simulation. Docking of GHRP-6, echinacoside, tubuloside A, or acteoside to the binding site of GHSR was performed in silico by employing the LibDock module in the Discover Studio 2.1 package and further minimized by smart minimize algorithm with CHARMm force field in the Discover Studio 2.1 package [33]. To compare the relative binding affinities of echinacoside, tubuloside A, and acteoside in GHSR, the active center area constructed with GHRP-6 in GHSR was used for the docking, and the binding energy was calculated by GEMDOCK (The Institute of Bioinformatics, National Chiao Tung University, Taiwan).

The work was partly supported by a grant to Jason TC Tzen of National Chung-Hsing University (NCHU-102D604).

The authors thank Tian-Shun Weng for sharing his professional experience in the usage of Cistanche species.

All authors declare no conflicts of interest. 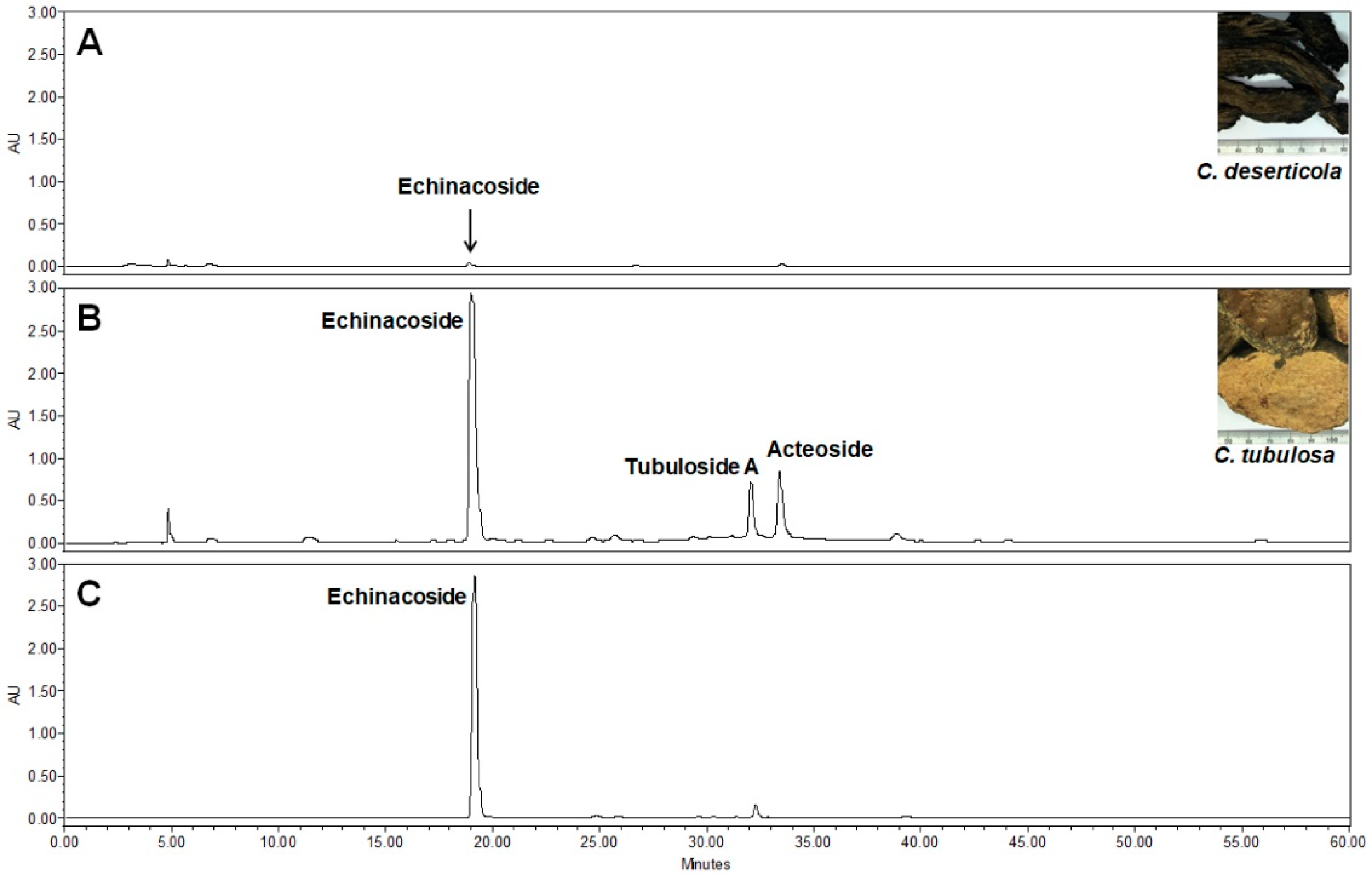 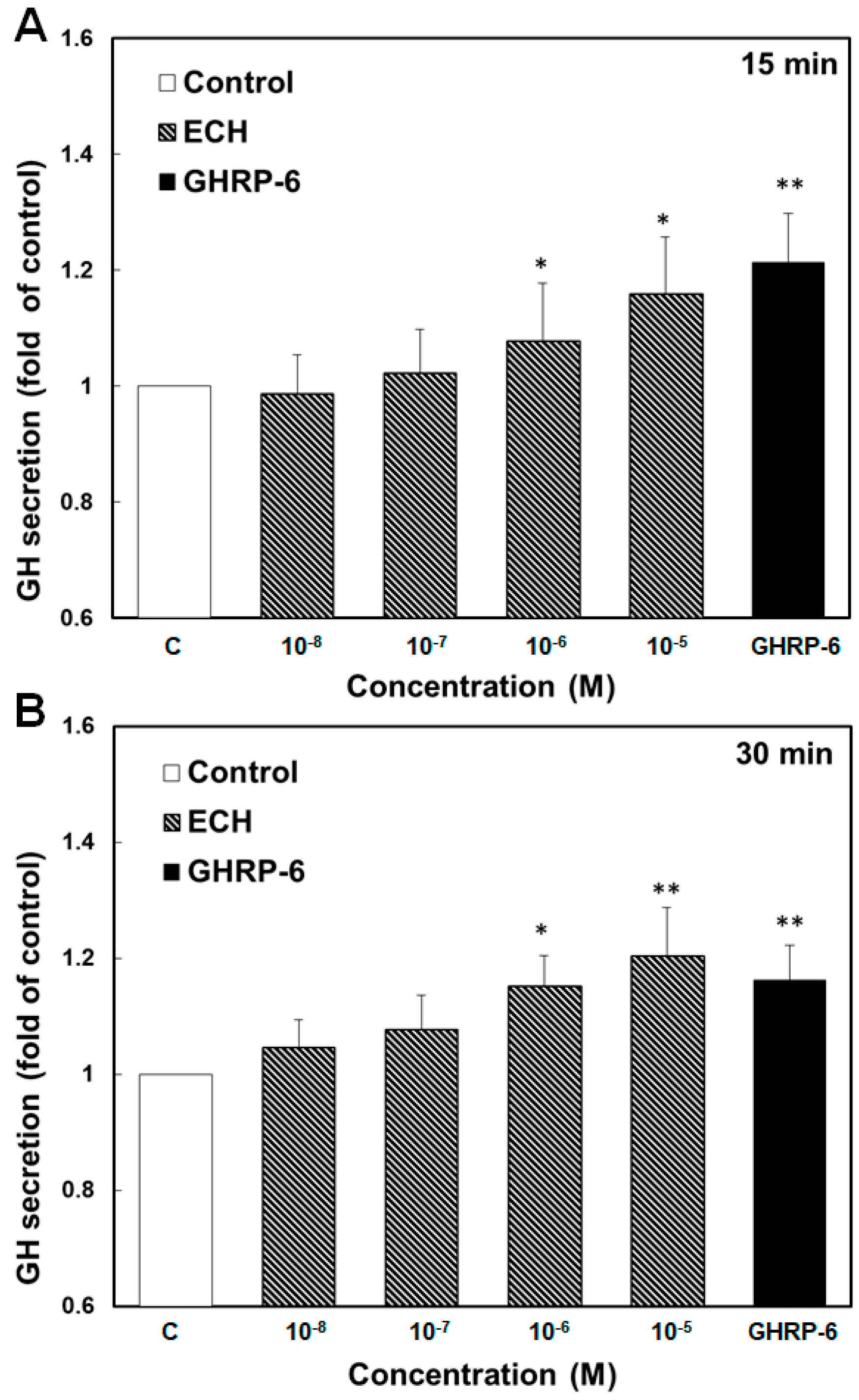 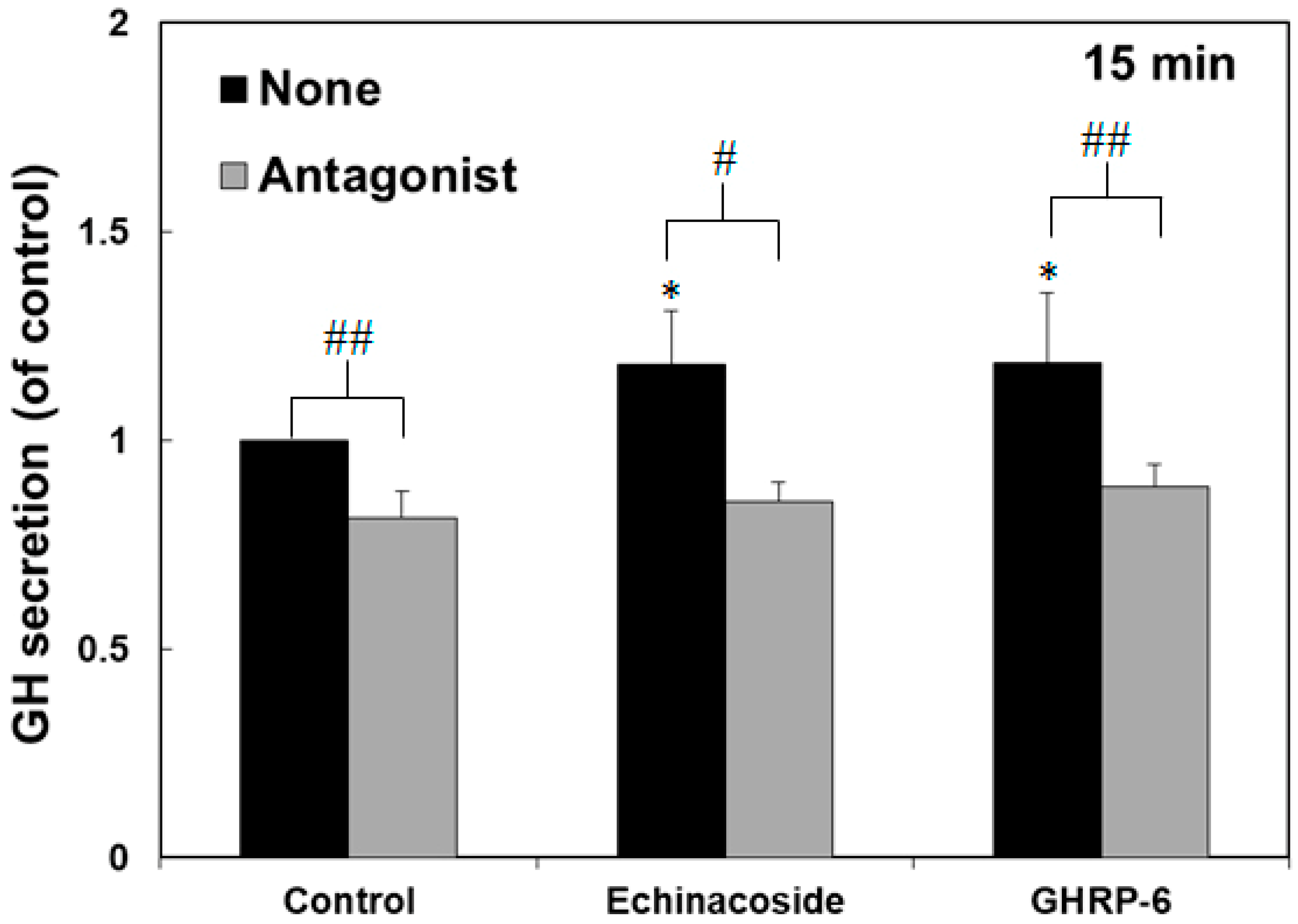