A disorder in pears that is known as ‘hard-end’ fruit affects the appearance, edible quality, and market value of pear fruit. RNA-Seq was carried out on the calyx end of ‘Whangkeumbae’ pear fruit with and without the hard-end symptom to explore the mechanism underlying the formation of hard-end. The results indicated that the genes in the phenylpropanoid pathway affecting lignification were up-regulated in hard-end fruit. An analysis of differentially expressed genes (DEGs) identified three NAC transcription factors, and RT-qPCR analysis of PpNAC138, PpNAC186, and PpNAC187 confirmed that PpNAC187 gene expression was correlated with the hard-end disorder in pear fruit. A transient increase in PpNAC187 was observed in the calyx end of ‘Whangkeumbae’ fruit when they began to exhibit hard-end symptom. Concomitantly, the higher level of PpCCR and PpCOMT transcripts was observed, which are the key genes in lignin biosynthesis. Notably, lignin content in the stem and leaf tissues of transgenic tobacco overexpressing PpNAC187 was significantly higher than in the control plants that were transformed with an empty vector. Furthermore, transgenic tobacco overexpressing PpNAC187 had a larger number of xylem vessel elements. The results of this study confirmed that PpNAC187 functions in inducing lignification in pear fruit during the development of the hard-end disorder. View Full-Text
Keywords: ‘Whangkeumbae’; pear; hard-end; NAC; lignification ‘Whangkeumbae’; pear; hard-end; NAC; lignification
►▼ Show Figures 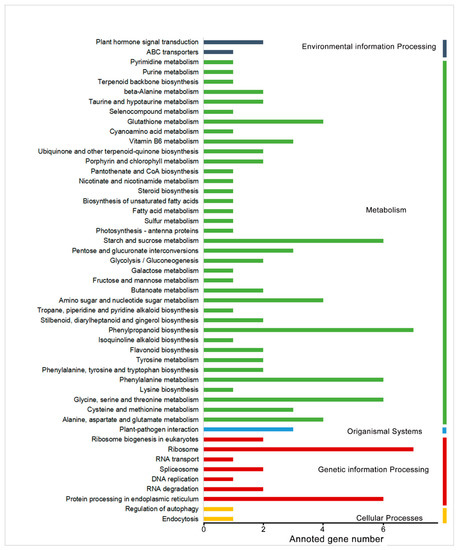