Correction: Kumar, M.R., et al. Characterization of Polysulfides, Polysulfanes, and Other Unique Species in the Reaction between GSNO and H2S. Molecules 2019, 24, 3090
Previous Article in Special Issue

Functional polymeric materials composed solely of lignin preparations appeared only very recently. A gradual paradigm shift spanning 56 years has revealed how lignin–lignin blends can upgrade the performance of 100 wt% lignin-based plastics. The view, first espoused in 1960, that lignin macromolecules are crosslinked reduces the plausibility of creating functional polymeric materials that are composed only of lignin preparations. Lignin-based materials would be much weaker mechanically if interstices remain in significant numbers between adjoining macromolecular structures that consist of rigid crosslinked chains. In 1982, random-coil features in the hydrodynamic character of kraft lignin (KL) components were evident from ultracentrifugal sedimentation equilibrium studies of their SEC behavior. In 1997, it was recognized that the macromolecular species in plastics with 85 wt% levels of KL are associated complexes rather than individual components. Finally, in 2016, the first polymeric material composed entirely of ball-milled softwood lignin (BML) was found to support a tensile strength above polyethylene. Except in its molecular weight, the BML was similar in structure to the native biopolymer. It was composed of associated lignin complexes, each with aromatic rings arranged in two domains. The inner domain maintains structural integrity largely through noncovalent interactions between cofacially-offset aromatic rings; the peripheral domain contains a higher proportion of edge-on aromatic-ring arrangements. Interdigitation between peripheral domains in adjoining complexes creates material continuity during casting. By interacting at low concentrations with the peripheral domains, non-lignin blend components can improve the tensile strengths of BML-based plastics to values well beyond those seen in polystyrene. The KL-based plastics are weaker because the peripheral domains of adjoining complexes are less capable of interdigitation than those of BML. Blending with 5 wt% 1,8-dinitroanthraquinone results in a tensile strength above that of polyethylene. Analogous effects can be achieved with 10 wt% maple γ-valerolactone (GVL) lignin which, with a structure close to the native biopolymer, imparts some native character to the peripheral domains of the KL complexes. Comparable enhancements in the behavior of BML complexes upon blending with 10 wt% ball-milled corn-stover lignin (BMCSL) result in lignin-only polymeric materials with tensile strengths well beyond polystyrene. View Full-Text
Keywords: lignin valorization; lignin blends; lignin configuration; lignin-based plastics. lignin valorization; lignin blends; lignin configuration; lignin-based plastics.
►▼ Show Figures 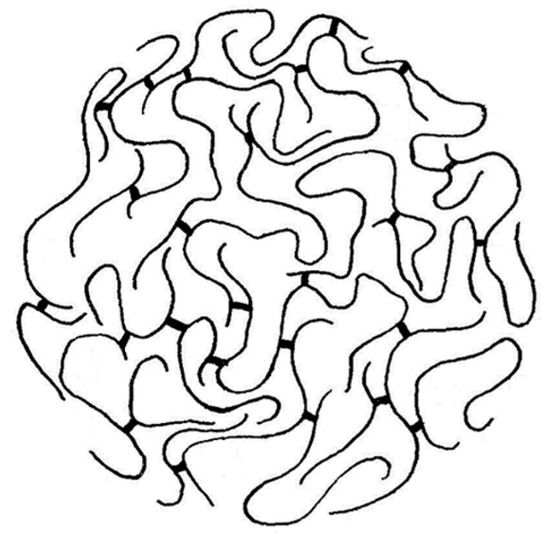