Naturally derived drugs and plant-based products are attractive commodities that are being explored for cancer treatment. This in vitro study aimed to investigate the role of Hypericum triquetrifolium (50% ethanol: 50% water) extract (HTE) treatment on apoptosis, cell cycle modulation, and cell cycle arrest in human colon cancer cell line (HCT-116). HTE induced cell death via an apoptotic process, as assayed by an Annexin V-Cy3 assay. Exposing HCT-116 cells to 0.064, 0.125, 0.25, and 0.5 mg/mL of HTE for 24 h led to 50 ± 9%, 71.6 ± 8%, 85 ± 5%, and 96 ± 1.5% apoptotic cells, respectively. HCT-116 cells treated with 0.25 and 0.5 mg/mL HTE for 3 h resulted in 38.9 ± 1.5% and 57.2 ± 3% cleavage of caspase-3-specific substrate, respectively. RT-PCR analysis revealed that the HTE extract had no effect on mRNA levels of Apaf-1 and NOXA. Moreover, the addition of 0.125 mg/mL and 0.25 mg/mL HTE for 24 h was clearly shown to attenuate the cell cycle progression machinery in HCT-116 cells. GC/MS analysis of the extract identified 21 phytochemicals that are known as apoptosis inducers and cell cycle arrest agents. All the compounds detected are novel in H. triquetrifolium. These results suggest that HTE-induced apoptosis of human colon cells is mediated primarily through the caspase-dependent pathway. Thus, HTE appears to be a potent therapeutic agent for colon cancer treatment. View Full-Text
Keywords: apoptosis; colon cancer; cell cycle; phytochemicals; Hypericum triquetrifolium apoptosis; colon cancer; cell cycle; phytochemicals; Hypericum triquetrifolium
►▼ Show Figures 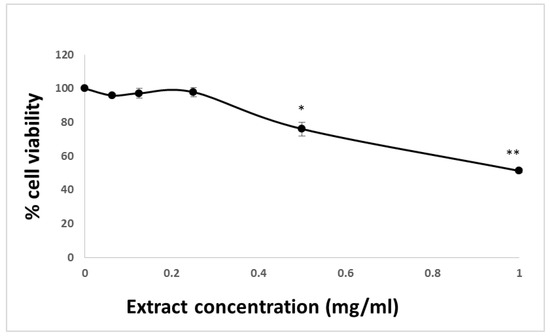