A Three-Step, Gram-Scale Synthesis of Hydroxytyrosol, Hydroxytyrosol Acetate, and 3,4-Dihydroxyphenylglycol
Next Article in Special Issue

Microwave-Assisted Brine Extraction for Enhancement of the Quantity and Quality of Lipid Production from Microalgae Nannochloropsis sp.
Previous Article in Journal

Attenuated total reflection–Fourier transform infrared (ATR–FTIR) spectroscopy is a simple, cheap, and fast method to collect chemical compositional information from microalgae. However, (semi)quantitative evaluation of the collected data can be daunting. In this work, ATR–FTIR spectroscopy was used to monitor changes of protein, lipid, and carbohydrate content in seven green microalgae grown under nitrogen starvation. Three statistical methods—univariate linear regression analysis (ULRA), orthogonal partial least squares (OPLS), and multivariate curve resolution-alternating least squares (MCR–ALS)—were compared in their ability to model and predict the concentration of these compounds in the biomass. OPLS was found superior, since it i) included all three compounds simultaneously; ii) explained variations in the data very well; iii) had excellent prediction accuracy for proteins and lipids, and acceptable for carbohydrates; and iv) was able to discriminate samples based on cultivation stage and type of storage compounds accumulated in the cells. ULRA models worked well for the determination of proteins and lipids, but carbohydrates could only be estimated if already determined protein contents were used for scaling. Results obtained by MCR–ALS were similar to ULRA, however, this method is considerably easier to perform and interpret than the more abstract statistical/chemometric methods. FTIR-spectroscopy-based models allow high-throughput, cost-effective, and rapid estimation of biomass composition of green microalgae. View Full-Text
Keywords: microalgae; FTIR spectroscopy; statistical methods; carbohydrates; lipids; proteins; nitrogen starvation microalgae; FTIR spectroscopy; statistical methods; carbohydrates; lipids; proteins; nitrogen starvation
►▼ Show Figures 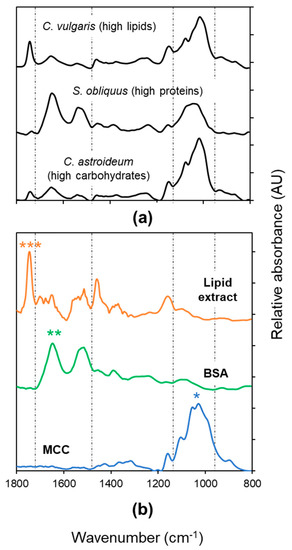