Brassica rapa L., an edible and medical vegetable, has been traditionally used in Uyghur folk medicine to treat coughs and asthma in the Xinjiang Uygur Autonomous Region, China. In this study, we prepared an n-butanol subfraction of B. rapa L. (BRBS) and investigated the anti-tumor effect on A549 lung adenocarcinoma cells. The proliferation of A549 cells was significantly inhibited by BRBS treatment in a dose- and time-dependent manner. BRBS significantly induced cell cycle arrest and apoptosis in A549 cells through increased reactive oxygen species (ROS) production and mitochondrial dysfunction characterized by a reduction in mitochondrial membrane potential and the release of cytochrome c, which promoted caspase-3 and poly(ADP-ribose) polymerase processing. Moreover, BRBS significantly suppressed the migration of A549 cells in vitro. These results suggest that BRBS inhibited A549 cell proliferation through increased ROS production and the mitochondria-dependent apoptosis pathway. Consequently, BRBS might be a potential candidate for the treatment of lung cancer.
Keywords: Brassica rapa L.; antitumor; reactive oxygen species; apoptosis; cell cycle arrest; migration Brassica rapa L.; antitumor; reactive oxygen species; apoptosis; cell cycle arrest; migration

Lung cancer is one of the most common cancers and the leading cause of cancer-related death worldwide [1]. In China, lung cancer is the most common cancer with around 733,300 new cases and 610,200 deaths in 2015 [2]. Although different strategies including chemotherapy, radiotherapy, targeted therapy and immunotherapy have been developed to treat lung cancer [3,4,5], the overall five-year survival rate is still lower than 18% [6]. Therefore, it is necessary to explore new drugs for the treatment of lung cancer.
Recently, a number of studies have been focused on the anti-tumor effects of natural products, especially traditional Chinese medicine [7,8,9,10]. Brassica vegetables belong to the Brassicaceae family and are cultivated in many countries. They contain various bioactive components including glucosinolates, carotenoids, tocopherols, ascorbic acid and phenolic compounds, and show both antioxidant and antitumor activities [11,12,13,14]. Brassica rapa L. has been used in Uyghur folk medicine to treat coughs and asthma for a long time in the Xinjang Uygur Autonomous Region, China [15]. More and more bioactive components including polysaccharides, phenolics, flavonoids and ascorbic acid have been isolated and identified from B. rapa L., which show different biological functions such as immunostimulation, anti-inflammation, anti-allergy and antioxidant [15,16,17,18,19,20]. However, the anti-tumor effects of B. rapa L. are yet to be investigated. In this study, we prepared the n-butanol subfraction of B. rapa L. (BRBS) and investigated the anti-tumor effect on A549 lung cancer cells. Our results showed that BRBS could induce apoptosis and cell cycle arrest in A549 cells through ROS generation and the mitochondria-dependent pathway.

2.1. BRBS Inhibits the Proliferation of A549 Cells

To detect the anti-tumor activity of BRBS, we first examined the morphological changes of A549 cells upon treatment with various doses (200, 400 and 600 µg/mL) of BRBS for 24 h. After BRBS treatment, cells became round and shrunken and cell number also decreased compared with untreated cells, as shown in Figure 1A. Next, the viability of A549 cells was determined using an MTT assay upon BRBS treatment for 24, 48 and 72 h. The results showed that BRBS significantly reduced the viability of A549 cells in a dose- and time-dependent manner, as shown in Figure 1B. The IC50 values of BRBS at 24, 48 and 72 h were 1519, 483.2 and 429.4 µg/mL respectively. Finally, the proliferation of A549 cells was analyzed by Ki-67 staining, which is correlated with disease recurrence and progression in malignancies [21]. Consistently, BRBS significantly decreased the frequencies of Ki-67+ cells (Figure 1C), indicating that the proliferation of A549 cells was suppressed. These data show that BRBS inhibits the growth of A549 cells.

2.2. BRBS Induces Apoptosis and Cell Cycle Arrest in A549 Cells

It has been reported that reactive oxygen species (ROS) are involved in mitochondria-dependent apoptosis due to mitochondria dysfunction [26,27]. After BRBS treatment for 24 h, A549 cells were stained with 2′,7′-Dichlorodihydrofluorescein diacetate (DCFH-DA) and observed by inverted fluorescence microscopy. The green fluorescence was enhanced by increasing of BRBS concentrations, as shown in Figure 5A. Furthermore, the ROS generation was detected by flow cytometry. We found that BRBS significantly increased intracellular ROS levels in a dose-dependent manner, as shown in Figure 5B. ROS production was also detected at indicated time points after 600 µg/mL BRBS treatment. The results showed that levels of ROS peaked at 2 h, decreased gradually from 4 h to 12 h and then increased at 24 h, as shown in Figure 5C. Glutathione (GSH) depletion is an early hallmark in ROS-mediated tumor cell apoptosis [28,29]. After BRBS treatment for 24 h, GSH/GSSG ratios in A549 cells were significantly decreased in a dose-dependent manner, as shown in Figure 5D. These results suggest that BRBS induced apoptosis by ROS induction and mitochondrial dysfunction in lung cancer cells.

The capacity for cancer cells to migrate is considered one of the critical processes in tumor metastasis. The effect of BRBS on A549 cell motility was evaluated by wound-healing assays. As shown in Figure 6, BRBS treatment significantly suppressed A549 cell migration in a dose-dependent manner, suggesting that BRBS might inhibit the invasion and metastasis of lung cancer.

High dietary intake of Brassica vegetables is associated with a reduced risk of cancer and various compounds including flavonoids, lectin and 1-cyano-2,3-epithiopropane have been isolated from Brassica vegetables which can inhibit the growth of tumor cells through induction of apoptosis [30,31,32]. In the present study, we found that BRBS dose- and time- dependently suppressed the proliferation of A549 cells through induction of cell cycle arrest at G0/G1 phase and mitochondria-dependent apoptosis. A549 cell migration was also significantly inhibited by BRBS treatment.
ROS play an essential role in the regulation of cell cycle and apoptosis [33,34]. An active compound derived from Brassica vegetables, 3,3′-Diindolylmethane, induces cell cycle arrest and apoptosis in cancer cells through up-regulation of ROS production [35]. Similarly, we found that BRBS significantly increased intracellular ROS generation and decreased the intracellular GSH/GSSG ratio in A549 cells, which might mediate the induction of cell cycle arrest and apoptosis. ROS generation can activate c-Jun N-terminal kinase to promote and inhibit the expressions of pro-apoptotic and anti-apoptotic BCL-2 proteins respectively, which play a critical role in mitochondria-dependent apoptosis pathway through regulation of mitochondrial membrane integrity [34,36,37]. Upon BRBS treatment, the expressions of Bax and Bcl-2 in A549 cells are up-regulated and down-regulated respectively, which cause further reduction in MMP and the release of cytochrome c. Consequently, cytochrome c activates the processing of caspase-3 and PARP observed in this study, which finally induces the apoptosis in A549 cells.
In conclusion, BRBS inhibits the proliferation of A549 cells through induction of cell cycle arrest and mitochondria-dependent apoptosis. These results indicate that B. rapa L. might be considered as a functional vegetable with potential role for the treatment of lung cancer.

A549 cells were seeded in 96-well plates and incubated for 24 h at 37 °C. The cells were treated with different concentrations (200, 400 and 600 μg/mL) of BRBS for 24 h. After treatment, cell morphological changes were observed and photographed by inverted fluorescence microscopy (Nikon Eclipse Ti-E, Tokyo, Japan).

A549 cells were treated with different concentrations (200, 400 and 600 μg/mL) of BRBS for 24 h or treated with 600 μg/mL of BRBS for 2, 4, 8, 12 and 24 h. After treatment, the level of intracellular ROS was measured by a ROS assay kit according to the manufacturer’s instructions (Beyotime, Shanghai, China). Briefly, cells were harvested and incubated with 2′,7′-dichlorofluorescein diacetate (DCFH-DA) for 20 min at RT. After washing with GIBCO® 1640 3 times, the fluorescence intensity was determined by flow cytometry (BD FACSCalibur, San Jose, CA, USA) or inverted fluorescence microscopy.
After BRBS treatment for 24 h, GSH/GSSG ratios in A549 cells were spectrophotometrically measured using a GSH/GSSG ratio kit (Beyotime) according to manufacturer’s instructions.

4.6. Analysis of Apoptosis and Cell Cycle

A549 cells were treated with different concentrations (200, 400 and 600 μg/mL) of BRBS. After 24 h, cells were harvested, washed with phosphate-buffered saline (PBS) and stained with an Annexin V-FITC/propidium iodide (PI) Apoptosis Detection Kit (YEASEN, Shanghai, China) according to manufacturer’s instructions. For analysis of the cell cycle distribution, cells were harvested after BRBS treatment and fixed in cold 70% ethanol at 4 °C for 30 min. Then, cells were stained with PI for 30 min at 37 °C. All samples were analyzed by flow cytometry.

A549 cells were treated with different concentrations (200, 400 and 600 μg/mL) of BRBS. After 24 h, cells were harvested and washed with PBS. After washing, cells were fixed and permeabilized with Foxp3 Staining Buffer Set (eBioscience, San Diego, CA, USA) according to the manufacturer’s instructions. Intracellular staining was performed using FITC conjugated Ki-67 antibody (BD Biosciences, San Jose, CA, USA) for 15 min at RT. The samples were analyzed by flow cytometry.

Mitochondrial membrane potential was determined by membrane-permeable JC-1 dye (Beyotime). Briefly, A549 cells were treated with BRBS, washed with PBS and stained with the JC-1 fluorescent probe according to manufacturer’s instruction for 20 min at RT. Samples were analyzed by flow cytometry and inverted fluorescence microscope.

A549 cells were seeded in 24-well plates at the concentration of 2 × 106 cells per well and incubated at 37 °C overnight. Cell monolayers that converged almost 100% were wounded with a sterile 200 µL pipette tip. Detached cells were removed from the plates carefully with PBS and completed GIBCO® 1640 was added. The cells were left either untreated or treated with different doses (200, 400 and 600 μg/mL) of BRBS. After 24 h, the medium was replaced with PBS and the scratched areas were photographed using inverted fluorescence microscopy. The scratch areas of samples were analyzed by Image J at the indicated time points. The percentage of wound healing was calculated by the equation: wound healing(%) = (1 − scratch area at indicated time point/scratch area at 0 h) × 100%.

The morphological changes of A549 cell nuclei were analyzed by membrane-permeable DNA-binding dye Hoechst 33258. A549 cells were seeded into a 6-well plate at the concentration of 1 × 105 cells/well and incubated overnight. The cells were treated with 400 and 600 μg/mL of BRBS for 24 h and fixed with 4% ice-cold paraformaldehyde at 4 °C for 10 min. After washing 3 times with PBS, cells were stained with Hoechst 33258 (Beyotime) at 4 °C for 10 min. Samples were observed by inverted fluorescence microscope. 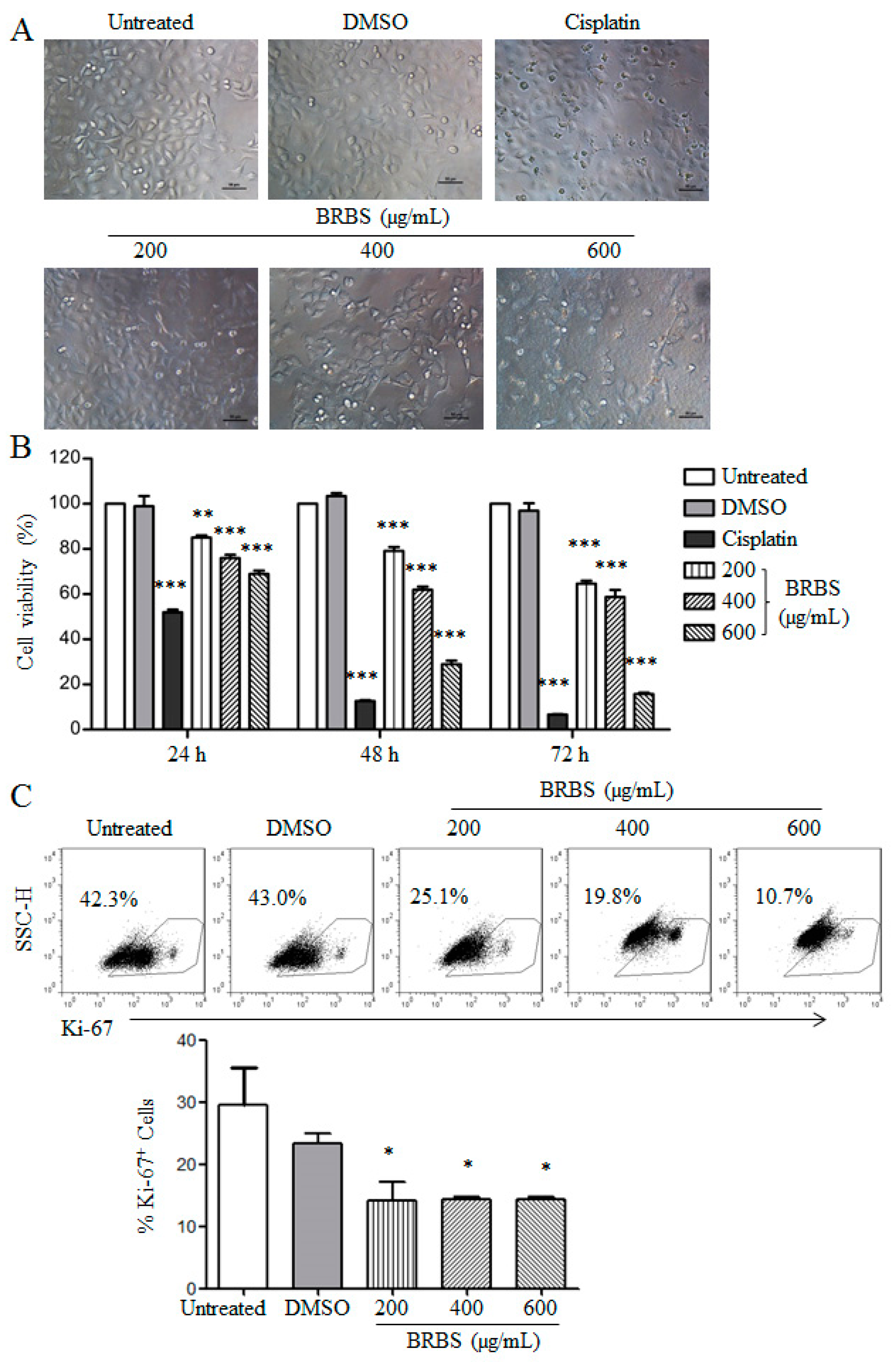 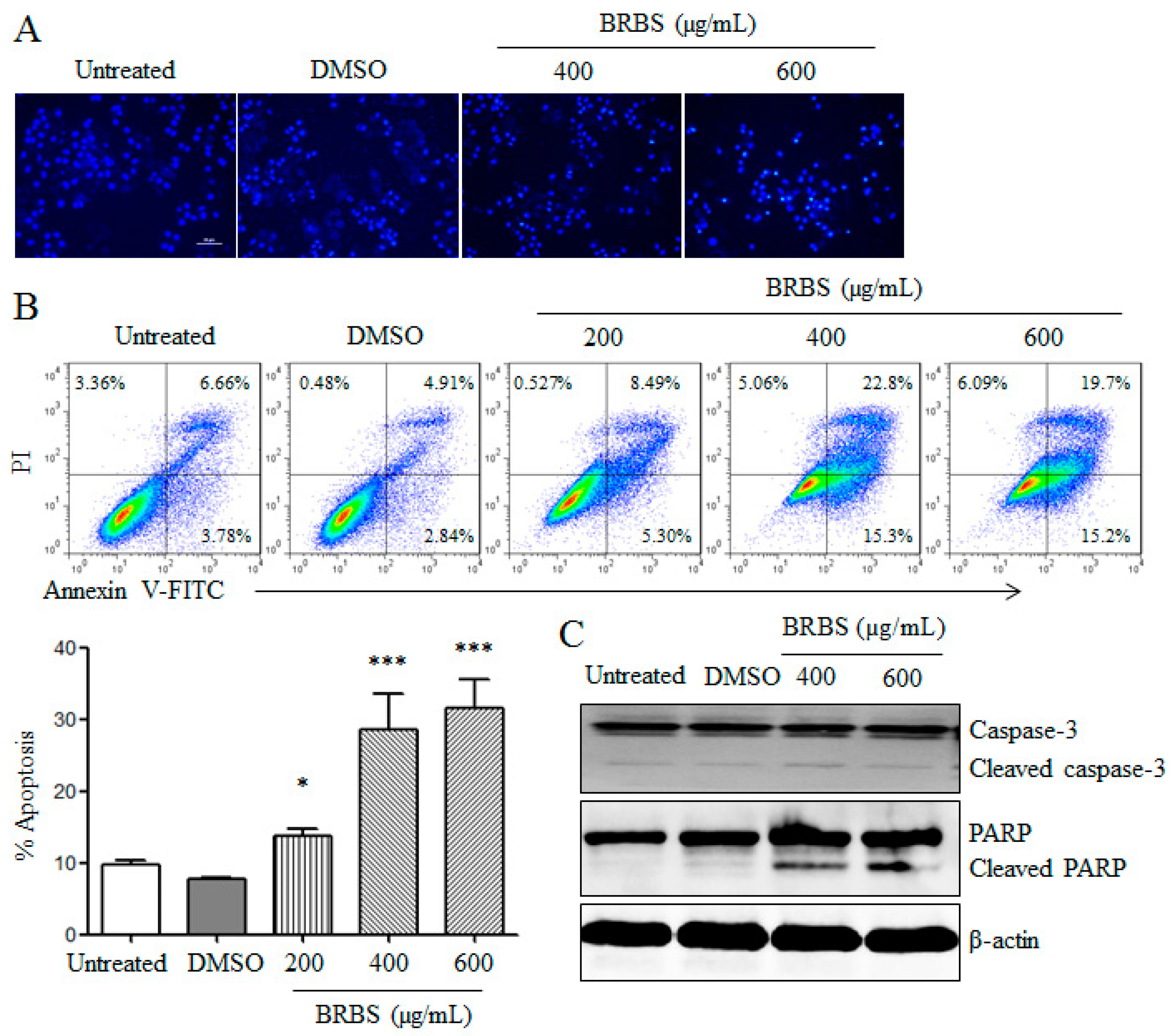 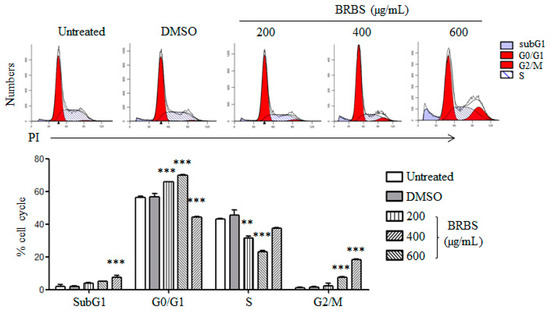 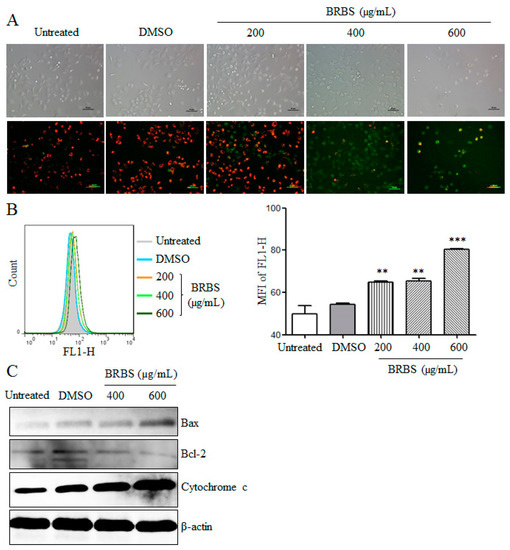 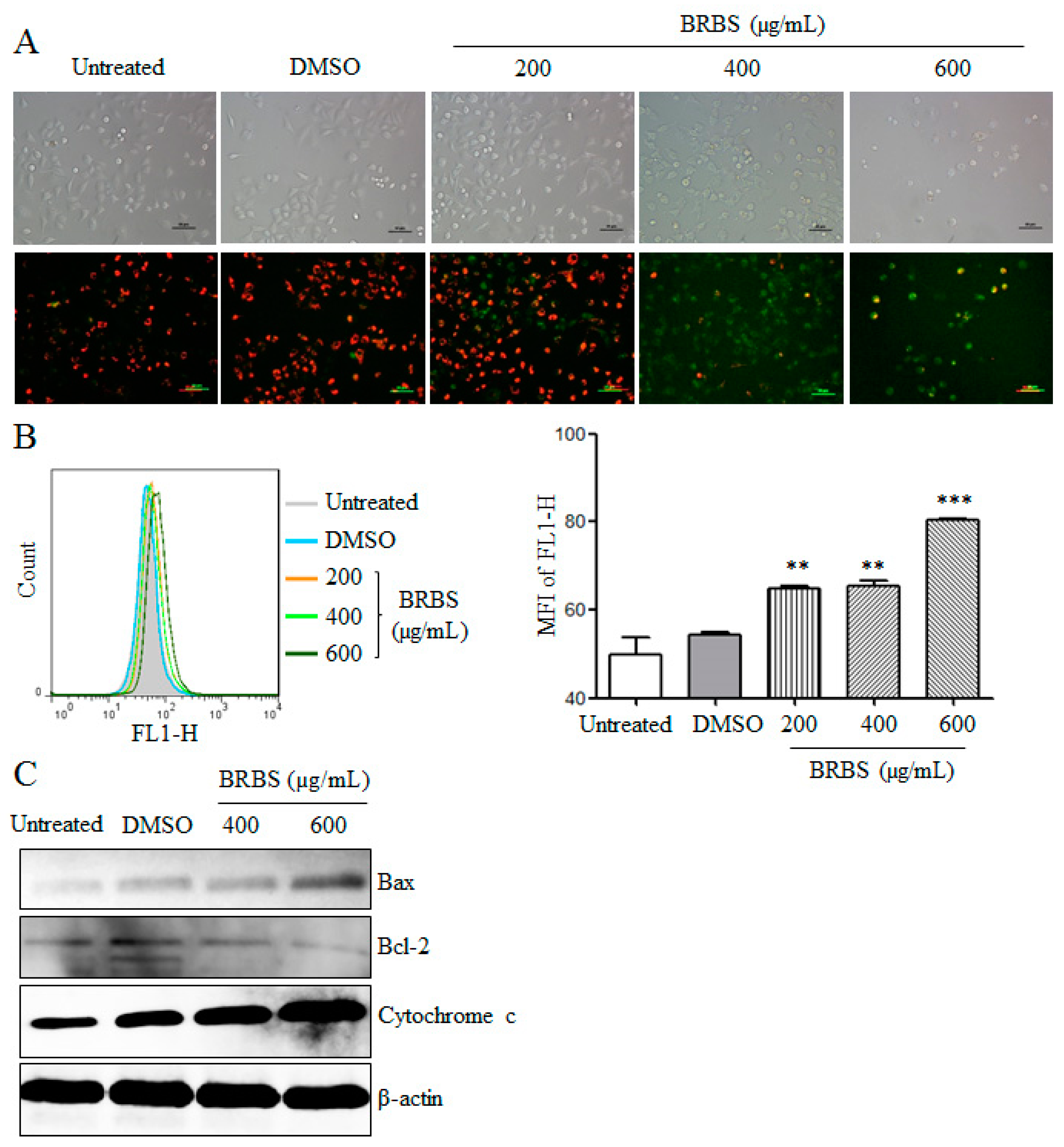 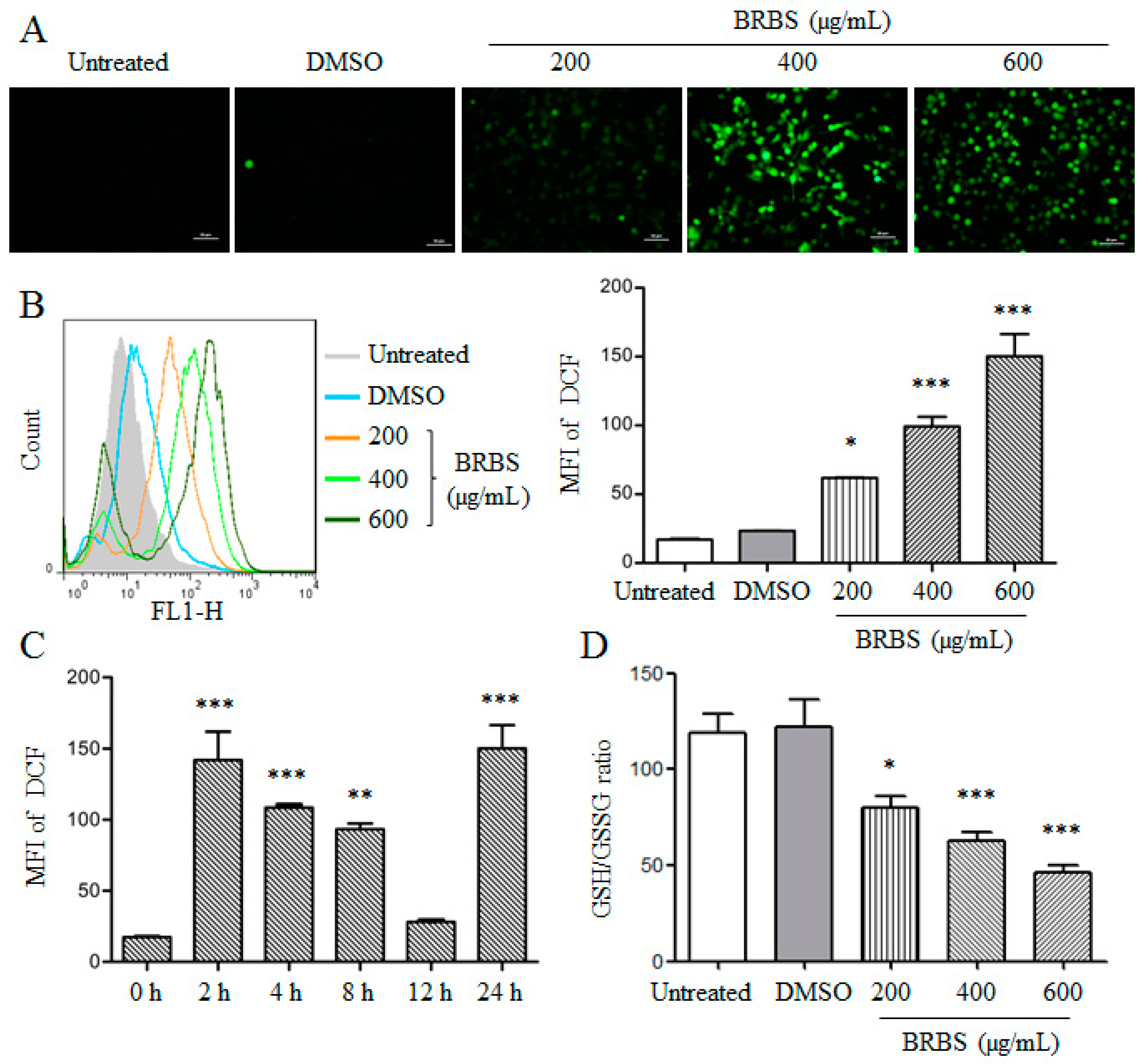 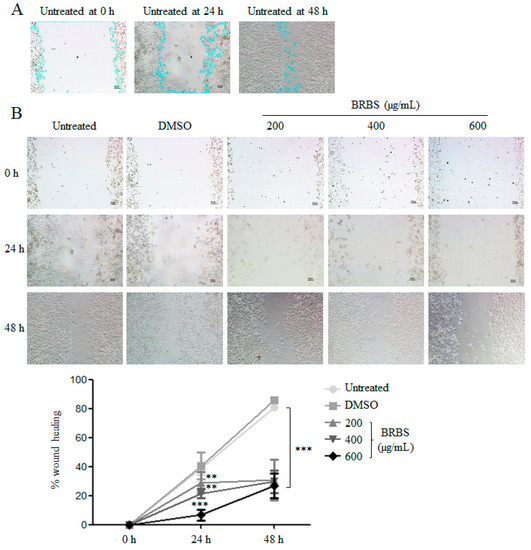 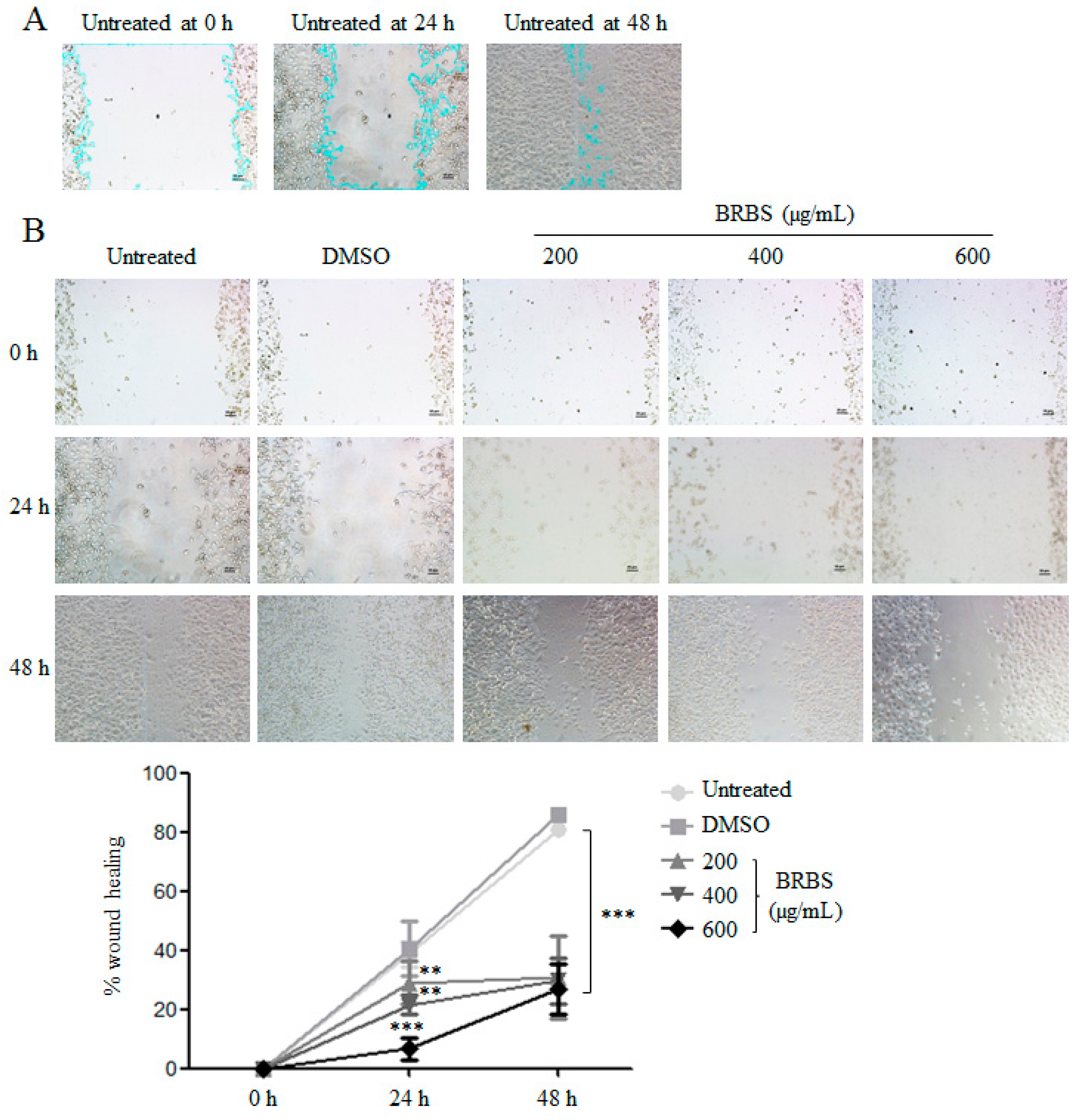