Biogas generation is the least complex technology to transform microalgae biomass into bioenergy. Since hydrolysis has been pointed out as the rate limiting stage of anaerobic digestion, the main challenge for an efficient biogas production is the optimization of cell wall disruption/hydrolysis. Among all tested pretreatments, enzymatic treatments were demonstrated not only very effective in disruption/hydrolysis but they also revealed the impact of microalgae macromolecular composition in the anaerobic process. Although carbohydrates have been traditionally recognized as the polymers responsible for the low microalgae digestibility, protease addition resulted in the highest organic matter solubilization and the highest methane production. However, protein solubilization during the pretreatment can result in anaerobic digestion inhibition due to the release of large amounts of ammonium nitrogen. The possible solutions to overcome these negative effects include the reduction of protein biomass levels by culturing the microalgae in low nitrogen media and the use of ammonia tolerant anaerobic inocula. Overall, this review is intended to evidence the relevance of microalgae proteins in different stages of anaerobic digestion, namely hydrolysis and methanogenesis. View Full-Text
Keywords: microalgae; anaerobic digestion; proteins; biogas; inhibition microalgae; anaerobic digestion; proteins; biogas; inhibition
►▼ Show Figures 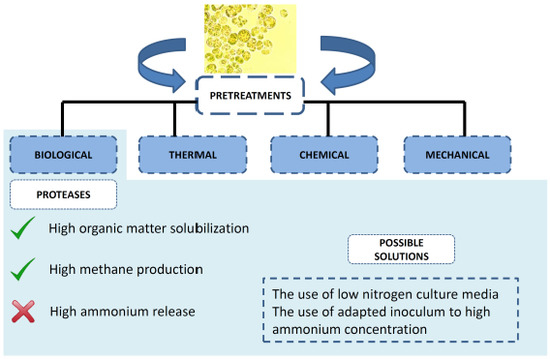