We investigated the antihypertensive effect of policosanol on spontaneously hypertensive rats (SHR). For this, we analyzed blood pressure, blood lipid, and lipoprotein properties in male SHR after consumption of Cuban policosanol (PCO). The experimental groups were as follows: normotensive Wistar Kyoto (WKY) control, SHR group fed normal diet (ND), SHR group fed 20 mg of PCO, SHR group fed 100 mg of PCO, and SHR group fed 200 mg of PCO per kg of body weight. After eight weeks, the SHR control group showed gradual increases up to 22% in systolic blood pressure (SBP) and 17.6% in the diastolic blood pressure (DBP) compared with values at week 0. However, policosanol consumption had a dose-dependent reduction effect on SBP and also reduced DBP up to 16% in a dose-dependent manner. Heart rate (HR) bpm increased by six percent in the SHR control, whereas the 20 mg, 100 mg, and 200 mg of policosanol groups showed a reduction of 36%, 28%, and 34% respectively. Although serum total cholesterol (TC) level of SHR was not affected by policosanol consumption (70–80 mg/dL), serum triglyceride (TG) level significantly decreased in the SHR + 200 mg of PCO group. Serum high-density lipoprotein cholesterol (HDL-C) level was also significantly elevated by policosanol consumption. The % HDL-C/TC ratio was elevated in the policosanol group up to 67–70%, whereas the SHR control group showed a ratio of 58%. Serum cholesteryl ester transfer protein (CETP) activity was reduced by policosanol in a dose-dependent manner. Although the serum glutamate oxaloacetate transaminase (GOT)/ glutamate pyruvate transaminase (GPT) were similar across all groups, policosanol consumption caused reduction of reactive oxygen species (ROS) levels in hepatic tissue. The SHR control group showed a 2.1-fold higher serum C-reactive protein (CRP) level than the WKY group, whereas the CRP level decreased in the SHR + 200 mg of PCO group (up to 45%) than SHR control group. Aldosterone level was reduced in the policosanol group (up to 34%) in a dose-dependent manner compared to the control. In conclusion, eight weeks of policosanol consumption in SHR resulted in remarkable reduction of blood pressure, serum aldosterone, and serum TG levels along with the elevation of HDL-C and improvement of hepatic inflammation. View Full-Text
Keywords: spontaneously hypertensive rats; policosanol; lipoproteins; hypertension; hepatic inflammation spontaneously hypertensive rats; policosanol; lipoproteins; hypertension; hepatic inflammation
►▼ Show Figures 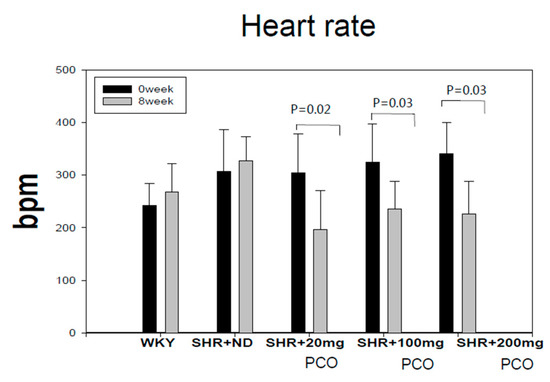