Aconitum (Ranunculaceae) consists of approximately 400 species distributed in the temperate regions of the northern hemisphere. Many species are well-known herbs, mainly used for analgesia and anti-inflammatory purposes. This genus is well represented in China and has gained widespread attention for its toxicity and detoxification properties. In southwestern China, several Aconitum species, called ‘Dula’ in the Yi Nationality, were often used to control the poisonous effects of other Aconitum plants. In this study, the complete chloroplast (cp) genomes of these species were determined for the first time through Illumina paired-end sequencing. Our results indicate that their cp genomes ranged from 151,214 bp (A. episcopale) to 155,769 bp (A. delavayi) in length. A total of 111–112 unique genes were identified, including 85 protein-coding genes, 36–37 tRNA genes and eight ribosomal RNA genes (rRNA). We also analyzed codon usage, IR expansion or contraction and simple sequence repeats in the cp genomes. Eight variable regions were identified and these may potentially be useful as specific DNA barcodes for species identification of Aconitum. Phylogenetic analysis revealed that all five studied species formed a new clade and were resolved with 100% bootstrap support. This study will provide genomic resources and potential plastid markers for DNA barcoding, further taxonomy and germplasm exploration of Aconitum. View Full-Text
Keywords: ranunculaceae; ‘Dula’; comparative genomics; herbal medicine; phylogenetic analysis ranunculaceae; ‘Dula’; comparative genomics; herbal medicine; phylogenetic analysis
►▼ Show Figures 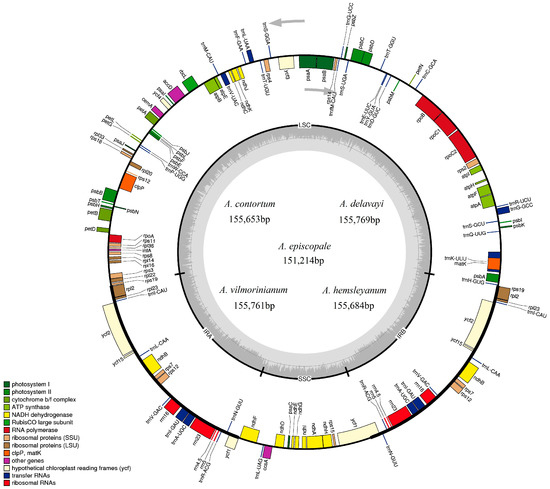