Three-dimensional (3D) cell culture is considered more clinically relevant in mimicking the structural and physiological conditions of tumors in vivo compared to two-dimensional cell cultures. In recent years, high-throughput screening (HTS) in 3D cell arrays has been extensively used for drug discovery because of its usability and applicability. Herein, we developed a microfluidic spheroid culture device (μFSCD) with a concentration gradient generator (CGG) that enabled cells to form spheroids and grow in the presence of cancer drug gradients. The device is composed of concave microwells with several serpentine micro-channels which generate a concentration gradient. Once the colon cancer cells (HCT116) formed a single spheroid (approximately 120 μm in diameter) in each microwell, spheroids were perfused in the presence of the cancer drug gradient irinotecan for three days. The number of spheroids, roundness, and cell viability, were inversely proportional to the drug concentration. These results suggest that the μFSCD with a CGG has the potential to become an HTS platform for screening the efficacy of cancer drugs. View Full-Text
Keywords: spheroids; concentration gradient generator; drug screening; high-throughput spheroids; concentration gradient generator; drug screening; high-throughput
►▼ Show Figures 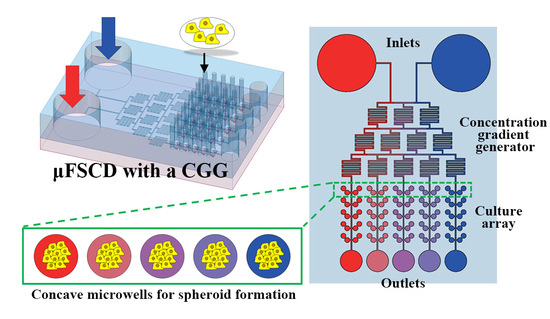