Designing Hybrids Targeting the Cholinergic System by Modulating the Muscarinic and Nicotinic Receptors: A Concept to Treat Alzheimer’s Disease
Next Article in Special Issue

Evaluation of the Antioxidant and Neuroprotectant Activities of New Asymmetrical 1,3-Diketones

Irisin, a skeletal muscle-secreted myokine, produced in response to physical exercise, has protective functions in both the central and the peripheral nervous systems, including the regulation of brain-derived neurotrophic factors. In particular, irisin is capable of protecting hippocampus. Since this area is the region of the brain that is most susceptible to Alzheimer’s disease (AD), such beneficial effect may inhibit or delay the emergence of neurodegenerative diseases, including AD. Also, the factors engaged in irisin formation appear to suppress Aβ aggregation, which is the pathological hallmark of AD. This review is based on the hypothesis that irisin produced by physical exercise helps to control AD progression. Herein, we describe the physiology of irisin and its potential role in delaying or preventing AD progression in human. View Full-Text
Keywords: physical exercise; irisin; neurodegeneration; Alzheimer’s disease physical exercise; irisin; neurodegeneration; Alzheimer’s disease
►▼ Show Figures 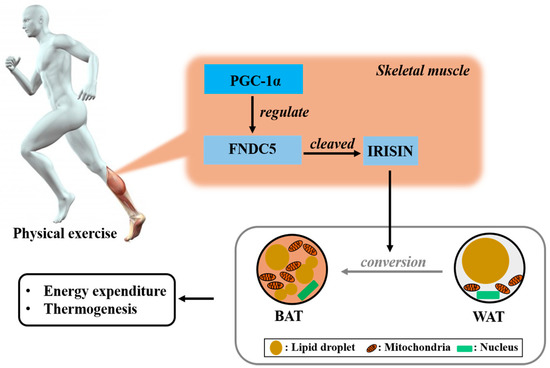