Chemical Components and Biological Activities of the Genus Phyllanthus: A Review of the Recent Literature
Next Article in Special Issue

In our research we used the extract from dietary supplement of elderberry (EE) and its dominant anthocyanin—cyanidin 3-O-glucoside (Cy 3-gluc). By interacting with a model membrane that reflects the main lipid composition of tumor membranes, the extract components, including Cy 3-gluc, caused an increase in packing order, mainly in the hydrophilic region of the membrane. It can thus be stated that EE caused a rigidifying effect, which is fundamental for understanding its anticancer and antioxidant activity. This study represents the first attempt to unravel the mechanism of interaction of elderberry extract with membranes. The results of the interaction with human serum albumin (HSA) proved that the studied substance quenches the fluorescence of HSA through a static mechanism in which the main interaction forces are Van der Waals and hydrogen bonding. The antioxidant activity of EE and Cy 3-gluc on liposomal membranes, antiradical properties and ability to inhibited the activity of the enzymes cyclooxygenase-1 and cyclooxygenase-2 were also demonstrated. Moreover, the anticancer activity of EE and Cy 3-gluc on human breast adenocarcinoma cell line were investigated. In addition, EE also exhibited the ability to form lipid aggregates in the form of liposomal capsules that can be applied as carriers of active biological substances, and the highest efficacy of EE encapsulation was obtained for multilayered liposome formulations. View Full-Text
Keywords: elderberry extract; cyanidin 3-O-glucoside; lipid membrane; albumin; cytotoxic properties; MCF-7 elderberry extract; cyanidin 3-O-glucoside; lipid membrane; albumin; cytotoxic properties; MCF-7
►▼ Show Figures 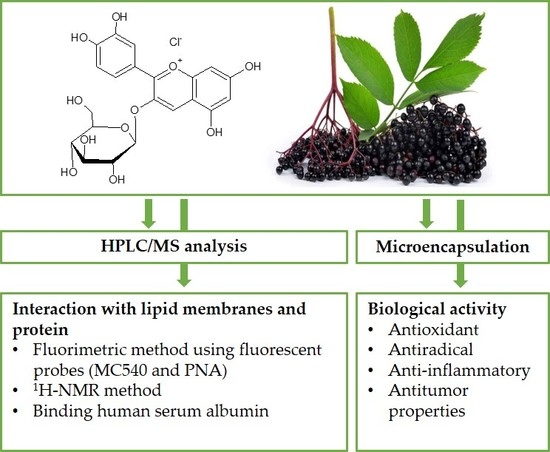