Glycosylation of 3-Hydroxyflavone, 3-Methoxyflavone, Quercetin and Baicalein in Fungal Cultures of the Genus Isaria

Flavonoids are plant secondary metabolites with a broad spectrum of biological activities. In nature, they occur mainly in the form of glycosides, but their extraction is often difficult and expensive, as is chemical synthesis. We have shown that biotransformations are an excellent method for obtaining flavonoid glycosides. We are the first team to describe the use of Isaria microorganisms in biotransformations of flavonoid compounds. In the present study as biocatalysts, we used one strain of Isaria fumosorosea KCH J2 isolated from a spider carcass in green areas of Wroclaw and two strains of I. farinosa (J1.4 and J1.6) isolated from insects found in already unused mines in Lower Silesia. The substrates were 3-hydroxyflavone, 3-methoxyflavone, quercetin (3,3′,4′,5,7-pentahydroxyflavone), and baicalein (5,6,7-trihydroxyflavone). For all the substrates that were used in this study, we obtained 4-O-methylglucopyranosides. In the case of substrates with a hydroxyl group in the third position, O-β-d-glucopyranosides were also formed. Isoquercetin that was obtained by biotransformation was used as a substrate to check the kinetics of the formation of flavonoid 4-O-methylglucopyranosides in I. fumosorosea KCH J2 culture. We did not observe the attachment of the methyl group to glucose unit in isoquercetin. Our finding suggest that the attachment of 4-O-methylglucopyranose occurs in one step. View Full-Text
Keywords: biotransformations; flavonoids; 3-hydroxyflavone; 3-methoxyflavone; quercetin; isoquercetin; baicalein; glycosylation; O-methylglucosides; Isaria biotransformations; flavonoids; 3-hydroxyflavone; 3-methoxyflavone; quercetin; isoquercetin; baicalein; glycosylation; O-methylglucosides; Isaria
►▼ Show Figures 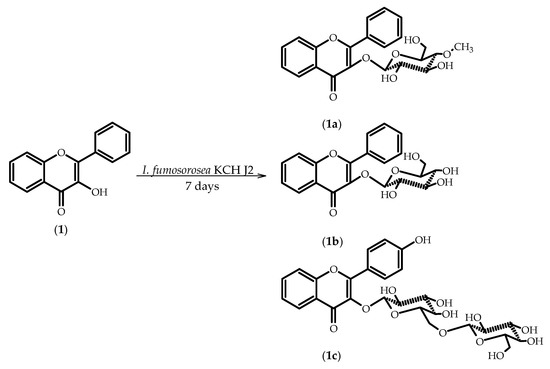