Epigallocatechin-3-O-gallate (EGCG) is the major catechin component of green tea (Cameria sinensis), and is known to possess antiviral activities against a wide range of DNA viruses and RNA viruses. However, few studies have examined chemical modifications of EGCG in terms of enhanced antiviral efficacy. This paper discusses which steps of virus infection EGCG interferes with, citing previous reports. EGCG appears most likely to inhibits the early stage of infections, such as attachment, entry, and membrane fusion, by interfering with viral membrane proteins. According to the relationships between structure and antiviral activity of catechin derivatives, the 3-galloyl and 5′-OH group of catechin derivatives appear critical to antiviral activities. Enhancing the binding affinity of EGCG to virus particles would thus be important to increase virucidal activity. We propose a newly developed EGCG-fatty acid derivative in which the fatty acid on the phenolic hydroxyl group would be expected to increase viral and cellular membrane permeability. EGCG-fatty acid monoesters showed improved antiviral activities against different types of viruses, probably due to their increased affinity for virus and cellular membranes. Our study promotes the application of EGCG-fatty acid derivatives for the prevention and treatment of viral infections. View Full-Text
Keywords: catechin; epigallocatechin-3-O-gallate; virus inhibition; attachment; entry; fusion; replication; budding; fatty acid derivative catechin; epigallocatechin-3-O-gallate; virus inhibition; attachment; entry; fusion; replication; budding; fatty acid derivative
►▼ Show Figures 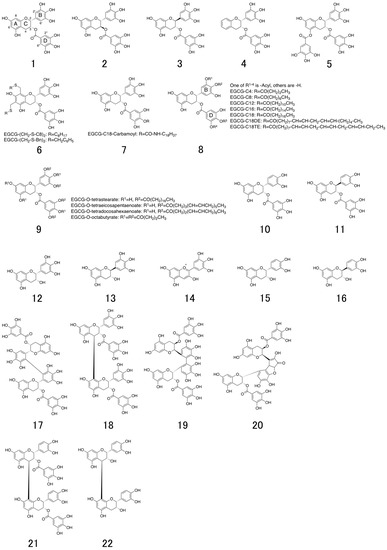