UPLC-QTOF-MS Identification of the Chemical Constituents in Rat Plasma and Urine after Oral Administration of Rubia cordifolia L. Extract
Previous Article in Journal

The excited-state lifetimes of the anticoagulant drug warfarin (W) in water and in the absence and presence of methyl-β-cyclodextrins (Me-β-CD) were recorded using time-resolved fluorescence measurements. Selective excitation of the open and cyclic protonated isomers of W were acquired with laser emitting diodes (LED) producing 320 and 280 nm excitation pulses, respectively. Formation of the inclusion complex was checked by UV-visible absorption spectroscopy, and the values of binding constants (2.9 × 103 M–1 and 4.2 × 102 M−1 for protonated and deprotonated forms, respectively) were extracted from the spectrophotometric data. Both absorption and time-resolved fluorescence results established that the interior of the macromolecular host binds preferentially the open protonated form, red shifts the maximum of its absorption of light at ~305 nm, extends its excited-state lifetime, and decreases its emission quantum yield (ФF). Collectively, sequestration of the open guest molecules decreases markedly their radiative rate constants (kr), likely due to formation of hydrogen-bonded complexes in both the ground and excited states. Due to lack of interactions, no change was observed in the excited-state lifetime of the cyclic form in the presence of Me-β-CD. The host also increases the excited-state lifetime and ФF of the drug deprotonated form (W−). These later findings could be attributed to the increased rigidity inside the cavity of Me-β-CD. The pKa values extracted from the variations of the UV-visible absorption spectra of W versus the pH of aqueous solution showed that the open isomer is more acidic in both ground and excited states. The positive shifts in pKa values induced by three derivatives of cyclodextrins: HE-β-CD, Ac-β-CD, and Me-β-CD supported the preferential binding of these hosts to open isomers over cyclic. View Full-Text
Keywords: open-cyclic tautomers; molecular switching; decay-associated spectra; warfarin; excited-state lifetime; cyclodextrins open-cyclic tautomers; molecular switching; decay-associated spectra; warfarin; excited-state lifetime; cyclodextrins
►▼ Show Figures 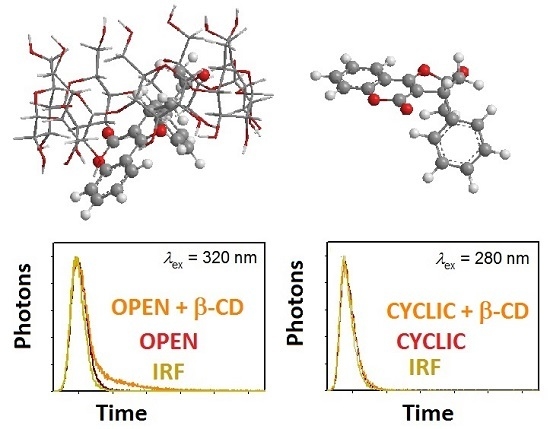