H2S-Mediated Protein S-Sulfhydration: A Prediction for Its Formation and Regulation
Next Article in Special Issue

The Role of Solvent-Accessible Leu-208 of Cold-Active Pseudomonas fluorescens Strain AMS8 Lipase in Interfacial Activation, Substrate Accessibility and Low-Molecular Weight Esterification in the Presence of Toluene

The alkaline cold-active lipase from Pseudomonas fluorescens AMS8 undergoes major structural changes when reacted with hydrophobic organic solvents. In toluene, the AMS8 lipase catalytic region is exposed by the moving hydrophobic lid 2 (Glu-148 to Gly-167). Solvent-accessible surface area analysis revealed that Leu-208, which is located next to the nucleophilic Ser-207 has a focal function in influencing substrate accessibility and flexibility of the catalytic pocket. Based on molecular dynamic simulations, it was found that Leu-208 strongly facilitates the lid 2 opening via its side-chain. The KM and Kcat/KM of L208A mutant were substrate dependent as it preferred a smaller-chain ester (pNP-caprylate) as compared to medium (pNP-laurate) or long-chain (pNP-palmitate) esters. In esterification of ethyl hexanoate, L208A promotes a higher ester conversion rate at 20 °C but not at 30 °C, as a 27% decline was observed. Interestingly, the wild-type (WT) lipase’s conversion rate was found to increase with a higher temperature. WT lipase AMS8 esterification was higher in toluene as compared to L208A. Hence, the results showed that Leu-208 of AMS8 lipase plays an important role in steering a broad range of substrates into its active site region by regulating the flexibility of this region. Leu-208 is therefore predicted to be crucial for its role in interfacial activation and catalysis in toluene. View Full-Text
Keywords: molecular dynamics; cold-active lipase; substrate-accessibility; interfacial activation; hydrolysis; esterification molecular dynamics; cold-active lipase; substrate-accessibility; interfacial activation; hydrolysis; esterification
►▼ Show Figures 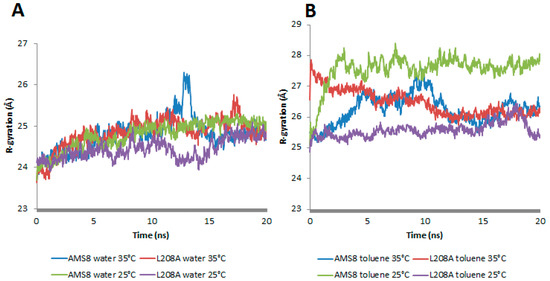