Silymarin/Silybin and Chronic Liver Disease: A Marriage of Many Years

Nowadays, even if a change in the etiology of chronic liver diseases is occurring, different strains of viral hepatitis still represent an important cause of chronic liver damage [62].
The anti-oxidant and anti-inflammatory action of silymarin allows us to understand easily its potentially healthy activity oriented towards the reduction of virus-related liver damage through the softening of inflammatory cascade and immune system modulation [63]. However, the relationship between chronic viral hepatitis and silymarin cannot be limited to this simple approximation. From the analysis of literature, it is possible to deduce the poor quality and lack of studies that analyse the interaction between silymarin and hepatitis B virus (HBV) infection. A meta-analysis performed by Wei et al. evaluated the efficacy and safety of silymarin and its therapeutic combination with antivirals (lamivudine and interferon) in the treatment of HBV chronic hepatitis [64]. The research highlighted that, from the analysed studies, it was possible to deduce a similar efficacy of silymarin and antiviral agents in normalizing aspartate aminotransferase (AST) and ALT levels, as well as an equivalent negative conversion rate of serum HBsAg (Relative Risk (RR) = 1.50; 95% Confidence Interval (CI) = 0.18–12.35) and HBeAg (RR = 1.80; 95% CI = 0.43–7.60). Furthermore, they highlighted that silymarin, associated with the use of antivirals, was able to promote a major effect on serum level reduction of transaminases compared to the use of antivirals alone [64]. Nevertheless, the same authors stated that there was no remarkable data in literature for suggesting the use of silymarin associated with antiviral therapy in the treatment of HBV chronic infection, probably due to various criticism in the construction of analysed trials [64]. Similar outcomes were obtained by other researchers, who highlighted the role of silymarin in inducing a reduction of transaminase levels during viral hepatitis. However, with respect to the histology or serum viral content, there were no direct effects due to its use [47].
Virus C chronic hepatitis (HCV) represents the most frequent cause of viral chronic hepathopathy worldwide, especially after the introduction of HBV vaccination in the 1980s [65].
Although, in clinical practice, most of the patients affected by HCV, who undergo or do not undergo antiviral treatment, use herbal products such as silymarin, its use cannot be recommended because it is not supported by significant scientific evidence [66]. As highlighted by analysis of scientific literature, even for the role of silymarin in determining the block of both entry and fusion HCV and viral replication [67,68,69,70,71,72], in a meta-analysis of Yang et al., a healthy effect on HCV-RNA serum level has been demonstrated (although not statistically significant). This effect was proved only when silymarin was administered both per os and through high-dose intravenous injection [66].
Intravenous administration of silybin is able to inhibit viral replication by intervening directly in the HCV lifecycle. Indeed, it is able to inhibit HCV RNA-dependent RNA polymerase function independently from intracellular interferon (IFN)-induced antiviral pathways [71]. Silymarin is unable to block HCV binding to cells; however, it blocks both HCV entry and fusion of HCV with liposomes [69]. Furthermore, silymarin, but not silybin, inhibits JFH-1 genotype 2a NS5B-dependent RNA polymerase activity, microsomal triglyceride transfer protein activity, apolipoprotein B secretion, and, therefore, the leakage of infectious virion from the cell [69].
The effects on inhibition of viral replication carried out by intravenous administration were also analysed by Ferenci et al., who demonstrated how silybin, by blocking HCV polymerase function at a half maximal inhibitory concentration (IC50) between 75 μM and 100 μM, is able to reduce HCV viral loads from three to four logs within one/four weeks in previous peginterferon nonresponder patients [73].
This fact is confirmed by a case report in which a potential antiviral direct effect carried out by a combined treatment of 238 days with 1200 mg/day of endovenous silymarin, 1200 mg/day of ribavirin and 6000 U/day of vitamin D has been highlighted. This therapeutic approach has been demonstrated to be very tolerable, and it allowed the achievement of sustained virologic response (SVR) in a 44 year-old female HCV genotype-1 infected patient with a previous therapeutic failure based on interferon and ribavirin [74]. Moreover, the endovenous administration of silymarin is able to reduce the viral load of patients affected by genotype 3 HCV, opening the doors to a possible therapeutic combination with the latest direct-acting antivirals (DAA) therapies, in light of the most recent viral eradication data for the different HCV genotypes, towards difficult-to-treat genotypes [75,76,77].
Some years ago, before new therapies based on DAAs, the endovenous treatment with silymarin was also studied as possible adjuvant, lead-in therapy for 14 days (20 mg/kg/day) followed by a triple therapy with peginterferon-ribavirin and telaprevir for 12 weeks, in order to obtain SVR in difficult-to-treat patients: HCV/human immunodeficiency virus (HIV) co-infected patients or with advanced fibrosis, in whom a viral eradication rate of 63% was found, which is higher than deriving data, for the same type of patients, from CUPIC (Compassionate Use of Protease Inhibitors in viral C Cirrhosis) and REALIZE (A Safety and Effectiveness Study of Telaprevir in Chronic, Genotype 1, Hepatitis C Patients That Failed Previous Standard Treatment) (20% and 50%, respectively) studies [78,79,80].
This interesting data has to be re-assessed in light of the latest therapies for the eradication of HCV infection, in which most DDA therapeutic regimens reach rates of SVR higher than 90% and an onset of side effects lesser than previous therapies based on interferon and ribavirin. Consequently, in clinical practice, the implementation of a daily endovenous therapy based on silymarin is not applicable.

The excessive ethanol consumption represents one of the most widespread causes of chronic hepatopathy worldwide, with a prevalence that varies depending on the geographical area considered. Sometimes, alcohol abuse can associate itself to other causes of liver damage, including HCV, causing a coexistence of harmful stimuli for the liver, which is able to hugely accelerate the progression of the pathology to more advanced forms, as well as cause acute liver failure in patients with HCV-related chronic hepatopathy [81].
Alcohol liver damage is mainly linked to the alteration of the oxidoreductive potential of cells due to ethanol metabolism. Indeed, the activity of alcohol dehydrogenase at first, and of aldehyde dehydrogenase later, causes a reduction in NAD+/NADH ratio, which underlies the process that causes a reduced mitochondrial capacity to metabolize lipids. The high quantity of lipids, together with the elevated intracellular oxidative stress, due to activation of secondary metabolic pathways for ethanol, such as microsomal ethanol oxidizing system (MEOS), leads to lipid lypoperoxidation, responsible for the loss of cellular and mitochondrial membrane function, with consequent cellular death [82,83].
The protective effect derived from silybin-phosphatidylcholine complex (SilPho) towards oxidative stress was demonstrated in one of our studies: in vitro, the use of SilPho is able to increase cellular vitality, evaluated by 3-(4,5-dimethylthiazol-2-yl)-2,5-diphenyl tetrazolium bromide assay (MTT), in conditions of oxidative stress induced by the incubation of HepG2 and MKN28 cells, with xanthine oxidase and its substratum called xanthine [23]. Moreover, we highlighted the effect derived from SilPho treatment, which reduced, in conditions of oxidative stress, both lipid peroxidation, evaluated by the measurement of a stress oxidative marker (Malondialdehyde), and cellular necrosis [23].
A study on mice, by Song et al. demonstrated that silymarin (200 mg/kg) was able to reduce oxidative stress, due to the gavage of ethanol 5 g/kg body weight every 12 h for a total of three doses, as well as prevent ALT increase, Glutathione (GSH) decrease, lipid peroxidation and TNF-α increase [84]. However, the lack of a pharmacokinetics assessment of silymarin administered per os represents a limitation in this study, given the low bioavailability of the compound, a condition that generates some doubts on the real role of silymarin regarding the results obtained in the aforementioned study.
Similarly, in another study on mice, it was shown how administration of 250 mg/kg per os of silybin is able to antagonize the increase in thiobarbituric acid reactive substance (TBARS), GSH reduction and the decrease of the content and the activities of superoxide dismutase (SOD), catalase (CAT), glutathione reductase (GR), and glutathione peroxidase (GPx), which are effects linked to ethanol exposure [85].
The key point for the comprehension of pathogenesis of ethanol-induced damage is the triggering of mitochondrial dysfunction caused by both lipid peroxidation and direct toxic effect due to intracellular accumulation of acetaldehyde. Indeed, in mitochondria, the main cellular metabolic reactions occur, many of which are potentially able to produce reactive oxygen species (ROS), especially in conditions of mitochondrial dysfunction, leading to closure of a vicious circle able to cause cellular death [86,87]. The use of silymarin and SilPho is able to optimize mitochondrial metabolic processes and the chain of electronic transport, to increase intracellular SOD activity, and to reduce monoamine oxidase (MAO) activity, definitively leading to the reduction of intracellular ROS levels for the improvement of mitochondrial functionality [88,89,90,91].
Therefore, the essential therapy in hepatopathy caused by ethanol abuse, is the abstinence from alcohol supported by pharmacological therapy, psychological support and counseling. However, from the pathogenic point of view, in the antagonism of alcohol-related liver damage, silymarin could represent a useful support therapy for the improvement of liver metabolic processes en route to breaking drinking habits, but further studies are necessary.

The “marriage of many years” that links silymarin/silybin to liver diseases, derives from the progressive evidence that, with the passing of time, has led to investigation of, firstly empirically and then scientifically, the mechanisms through which they act in carrying out the therapeutic effect. The studies of pharmacokinetics and pharmacodynamics on silymarin have improved, in the last few years, its applicability in different pathologies, especially liver diseases, allowing, through the use of conjugates compounds, a more efficient application. Through the analysis of literature, it has been demonstrated that silymarin has an effect that allows its use in all of the most frequent causes of liver damage. Indeed, silymarin has three important activities: anti-inflammatory, antioxidant and pro-apoptotic, which represent the “functional triad” that allows for antagonizing the onset and the progression of mechanisms of damage that are responsible for the progression of hepatitis to cirrhosis and HCC. However, it is clear that, also in the end stages of liver pathologies, silymarin can act by limiting de-novo fibrogenesis and antagonizing procarcinogenic mechanisms that cause HCC. Nevertheless, the treatment with silymarin/silybin in routine clinical practice is strongly limited, since it is necessary to obtain scientific data deriving from well-structured trials based on large populations of patients, and to achieve a standardization of methods used for evaluating the therapeutic efficacy, especially in an NAFLD context, that is particularly promising.

We thank Maddalena Farina (second cycle degree in Linguistics and Translation for Special Purposes) for her English assistance and anthosagency.it for graphics. 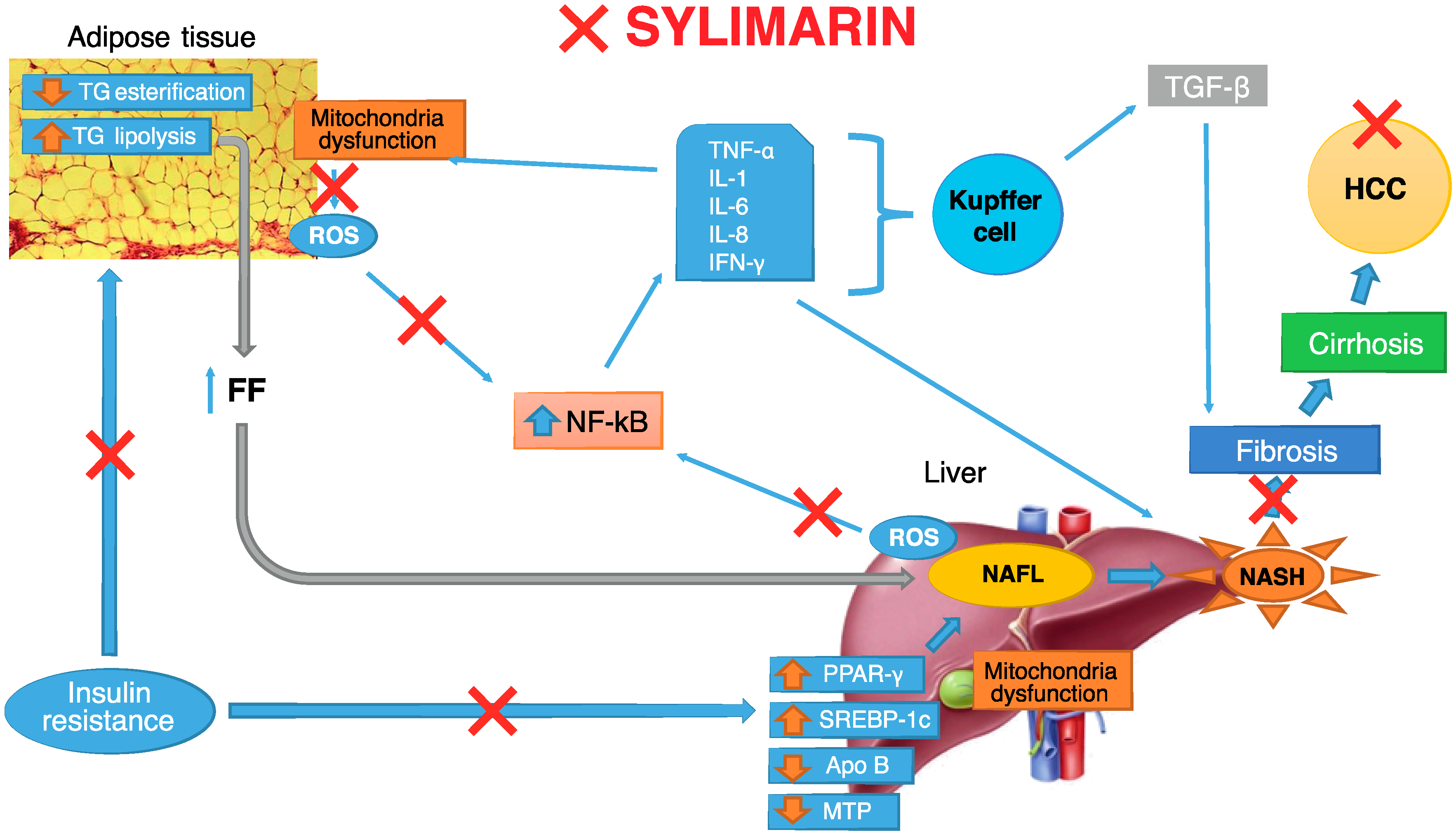