Yarrowia lipolytica (YL) is a “non-conventional” yeast that is capable of producing important metabolites. One of the most important products that is secreted by this microorganism is lipase, a ubiquitous enzyme that has considerable industrial potential and can be used as a biocatalyst in the pharmaceutical, food, and environmental industries. In this work, Yarrowia lipolytica lipase (YLL) was immobilized on Lewatit and Amberlite beads and is used in the enzymatic ring-opening polymerization (ROP) of cyclic esters in the presence of different organic solvents. YLL immobilized on Amberlite XAD7HP had the higher protein adsorption (96%) and a lipolytic activity of 35 U/g. Lewatit VPOC K2629 has the higher lipolytic activity (805 U/g) and 92% of protein adsorption. The highest molecular weight (Mn 10,685 Da) was achieved at 90 °C using YLL that was immobilized on Lewatit 1026 with decane as solvent after 60 h and 100% of monomer conversion.
Keywords: Yarrowia lipolytica; lipases; lipase immobilization; enzymatic polymerization Yarrowia lipolytica; lipases; lipase immobilization; enzymatic polymerization

The non-conventional yeast Yarrowia lipolytica is of interest for fundamental research and biotechnological applications. The fundamental studies play a crucial role in the establishment and development of the biotechnological processes. Yarrowia lipolytica is widespread in nature. Since Y. lipolytica is lipophilic and oleophilic yeast, the yeast strains are easily isolated from different sources containing lipid and hydrocarbon compounds, such as oily food and natural environments like oil fields [1]. The maximum growth of most Yarrowia strains is below 32–34 °C, and the yeast is not considered to be a possible human pathogen. Y. lipolytica has been classified as Generally Regarded. As Safe (GRAS) by the American Food and Drug Administration (FDA) [2]. Yarrowia lipolytica is a good model organism for protein secretion studies. Y. lipolytica secretes a set of valuable proteins, such as alkaline or acid proteases, RNases, phosphatases, lipases and inulinase into the medium, which are interesting for biotechnological applications. The enzymes could be used in the detergent, food, pharmaceutical, and environmental industries. The protein secretion pathway is also important to heterologous protein secretion by recombinant strains of Y. lipolytica [3].
Lipases (E.C. 3.1.1.3) are serine hydrolases defined as triacylglycerol acylhydrolases. They catalyze the hydrolysis of the ester bond of tri-, di-, and monoglycerides of long-chain fatty acids into fatty acids and glycerol. They differ from esterase (EC 3.1.1.1) due to their ability to hydrolyze triglyceride at the lipid-water interface [4].
Lipases are primarily responsible for the hydrolysis of acylglycerides. However, a number of other low- and high-molecular weight esters, thiol esters, amides, and polyol/polyacid esters are accepted as substrates by this unique group of enzymes [5].
Lipases secretion in Y. lipolytica was first reported in 1948 by Peters and Nelson [6,7], who described a single glucose-repressible activity with a pH optimum of around pH 6.2–6.5. Ota et al. described both an extracellular lipase activity in cultures supplemented with a protein-like fraction derived from soybean, and two cell-bound lipases: lipase I (39 kDa) and lipase II (44 kDa). The extracellular lipase required oleic acid as stabilizer-activator, whereas the cell-bound lipases did not and differed by several properties from the extracellular enzyme [8,9].
In 1993, it was first demonstrated that medium size lactones, δ-valerolactone (δ-VL, 6-membered), and ε-caprolactone (ε-CL, 7-membered), were polymerized by industrial lipases derived from Candida cylindracea (lipase CC), Burkholderia cepacia (lipase BC), Pseudomonas fluorescens (lipase PF), and porcine pancreas (PPL) [10,11,12]. Candida antartica (lipase CA), Candida rugosa (lipase CR), and Rhizomucor meihei (lipase RM) were also active for ROP of these monomer [13]. Ring-opening polymerization of various unsubstituted and substituted lactones, as well as other cyclic monomers has been extensively studied [14,15,16,17,18,19,20,21,22,23].

Lipases have emerged as one of the leading biocatalysts with proven potential for contributing to the multibillion-dollar lipid technology bio-industry. Yarrowia lipolytica has been considered as an industrial workhorse because of its ability to produce important metabolites and intense secretory activity. One of the most important products secreted by this microorganism is lipase.
Our laboratory previously isolated a stable lipase from this yeast. The effect of used commercial oil from a vacuum pump (instead of olive oil) and the presence of wheat flour were evaluated [24].
In this work, the ROP of ε-caprolactone by immobilized lipase from Y. lipolytica in the presence of organic solvents was investigated for the first time. The effects of lipase concentration (6–72 mg), monomer concentration (0.6–6 mmol), and temperature (70, 90 and 120 °C) were evaluated.

Lewatit VPOC K3433 had the lower protein adsorption (18%) and the lower lipolytic activity (3 U/g). Amberlite XAD7HP had the higher protein adsorption (96%) and a lipolytic activity of 35 U/g. Lewatit VPOC K2629 has the higher lipolytic activity (805 U/g) and 92% of protein adsorption.
For styrene resin beads the saturation time for YLL absorption was ~60 min. The adsorption rates of styrenic resins are attributed to stronger hydrophobic interactions between styrenic surfaces, functional groups of the resins and YLL. The dependence of adsorption rate on particle size is due to the pore size that is limiting protein transport to the inside of the particles. The small size of pores slows protein diffusion into beads so that smaller beads more rapidly were saturated in protein. Results for protein immobilization are summarized in Table 1.

Figure 4 shows that by increasing the catalyst concentration, the percent of monomer conversion rate increased. From a series of kinetic experiments, it was determined, that, by increasing enzyme/substrate (E/S) concentration, higher molecular weights were attained in a relatively shorter reaction time. Since the enzyme component of the reaction mixture normally has the relatively highest molecular weight percent of water, it follows that higher E/S ratios will lead to greater reaction water contents, which acts as a chain-transfer agent with the growing chain.

2.4. The Effect of the Substrate Concentration

The concentration of the cyclic ester in the solvent (decane), influences the degree of polymerization of the obtained polymer but also the formation of macrolactones. At lower concentrations, monomer conversion of 100% is observed. The highest molecular weight was obtained when YLL was immobilized on Lewatit 1026 (Mn 4722 Da) and 2 mmol of the substrate was used. When YLL was immobilized on amberlyst 15, a Mn of 2014 was observed when 6 mmol of the substrate was used. It was found that monomer conversion decreases when substrate concentration was higher (Figure 5).

Y. lipolytica strain was used in this study. It was maintained on slants of solid YPG medium (0.3% yeast extract, 1% peptone, 2% glucose, and 2% agar, pH 6.3), as previously described by Bartnicki-García and Nickerson [26].

Protein was measured by the method of Bradford [27] using bovine serum albumin as standard. The Bradford assay is a protein determination method that involves the binding of Coomassie Brilliant Blue G-250 dye to proteins. The dye exists in three forms: cationic (red), neutral (green), and anionic (blue) (Compton and Jones 1985). Under acidic conditions, the dye is predominantly in the doubly protonated red cationic form (Amax = 470 nm). However, when the dye binds to protein, it is converted to a stable unprotonated blue form (Amax = 595 nm). It is this blue protein-dye form that is detected at 595 nm in the assay using a spectrophotometer or microplate reader.

Lipase activity was measured using the simplified method of para-nitrophenyl palmitate assay for lipases and esterases, as previously described by Gupta et al. [28]. The basis of this assay protocol is the colorimetric estimation of para-nitrophenol (pNP) released as a result of enzymatic hydrolysis of pNPP at 410 nm. One unit of enzyme activity is defined as the amount of enzyme liberating 1 μmol of p-nitrophenol per minute.

Lipase production by Yarrowia lipolytica was made, as previously reported by Barrera et al., SDS-PAGE 12% showed one main protein band of 44.7 kDa revealed by silver stain [24]. Before immobilization, Lewatit, amberlite, and amberlyst beads were activated with ethanol (1:10 beads: ethanol) for 5 h, washed with distilled water and dried under vacuum for 24 h at room temperature. The beads (1 g) were shaken in a rotatory shaker in 15 mL of YLL lipase solution (the broth obtained after incubation and centrifugation to remove the yeast cells) with 0.16 mg/mL and pH 7.0 at 4 °C for 14 h. After incubation, the beads were filtered off, washed with distilled water, and then dried under vacuum for 24 h at room temperature.

Polymerizations were carried out by duplicate in 10-mL stoppered vials previously dried and purged with dry nitrogen. In a typical run, monomer (ε-CL, 1.08 mmol), catalyst (enzyme, 12 mg) and solvent (1 mL) were added under dry nitrogen atmosphere. Polymerizations were also carried out in bulk conditions. Vials were stoppered with a rubber septum and placed in a thermostated bath at predetermined temperatures (70, 90 and 120 °C) and time periods (12, 24, 36, 48, 54, 60, 72 and 120 h). Molecular weights and conversions during reaction were monitored by 1H-NMR. Solution 1H-NMR spectra were recorded at room temperature on a Varian Gemini 200 (200 MHz). Chloroform-d (CDCl3) was used as solvent. Spectra were referenced to the residual solvent protons at δ = 7.26 ppm for CDCl3 in the 1H-NMR spectrum. Degree of polymerization and monomer conversion were determined by 1H-NMR from the relative peak areas of signals corresponding to the ester methylene of the polymer (t, δ = 4.04 ppm CH2OCO), the ester methylene of the monomer (t, δ = 2.6 ppm CH2COO), and the chain terminal methylene groups (t, δ = 3.6 ppm CH2OH).

Yarrowia lipolytica lipase (YLL) (free and immobilized in Lewatit and Amberlite resins) has been tested as a biocatalyst for the ring-opening polymerization of cyclic esters in different organic solvents. Effect of monomer concentration, lipase concentration, solvent, and temperature were evaluated. Reactions carried out in poor solvents (such as hexane and decane) produce higher yields and molecular weights. On the other hand, good solvents deliver lower outputs. Higher temperatures increase the rate of polymerizations and molecular weights. Maximum monomer conversions are achieved when 0.5–3 mmol are used in the presence of 12 mg de immobilized lipase al 120 °C.

In this work, the application of Yarrowia lipolytica lipase biocatalysis to the production of biodegradable polyesters with a wide range of molecular weights has been explored. Following this approach, synthesis of other polymer derivatives (such as biodegradable polyurethanes and polyureas) is currently being explored in our research group. Yarrowia lipolytica lipase has found widespread biotechnology applications in the food, pharmaceutical, detergent, and other industries [29]. As a result, applications of lipase biocatalysis to produce different chemical materials have increased in recent years and are expected to continue in the future. As this process is based in a clean biocatalytic technology, in a long-term perspective it can be used to develop environmentally benign processes at the industrial level with minimal waste generation. Our approach provides of alternative chemical routes to obtain biodegradable polymers in an early stage of development, on the basis of a green chemistry approach. The used methodology can render products with improved properties produced in milder conditions. An important disadvantage of lipase biocatalysis for industrial applications is their low long-term stability under reaction conditions and the difficult recovery and recycling. However, if the enzyme is immobilized on a suitable support, such as the resins used in this work, a series of stable biocatalytic systems can be obtained. This approach is also tunable to variations in the synthesis conditions. Hence, the next level of research for this biocatalytic system is to design processes, which lend themselves to facile recovery and recycling of the catalyst, with good product yields and improved properties (as compared to those observed for polymers obtained by traditional chemical process).

K.A.B.-R. synthesized the compounds and performed the experimental part of this work. K.A.B.-R. and A.M.-R. are both the responsible researchers. A.M.-R. is the author to whom correspondence should be addressed to. Authors contributed equally to this work. 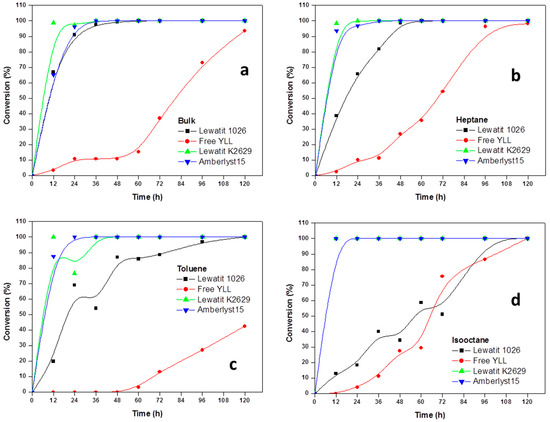 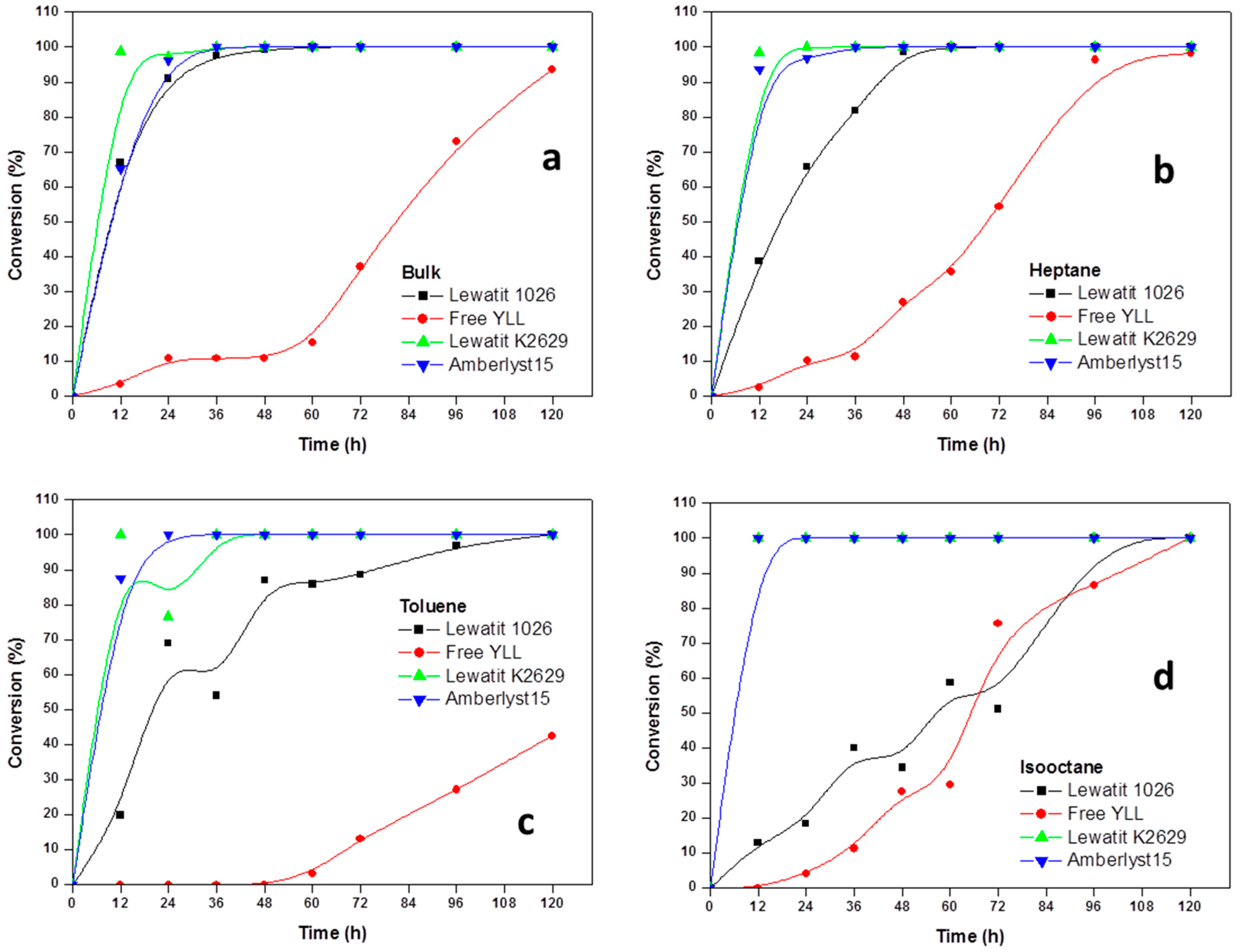 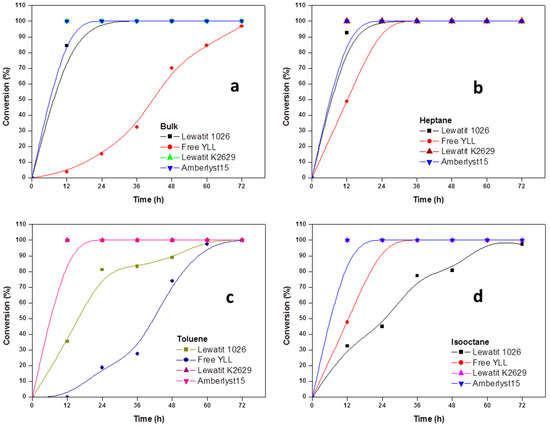 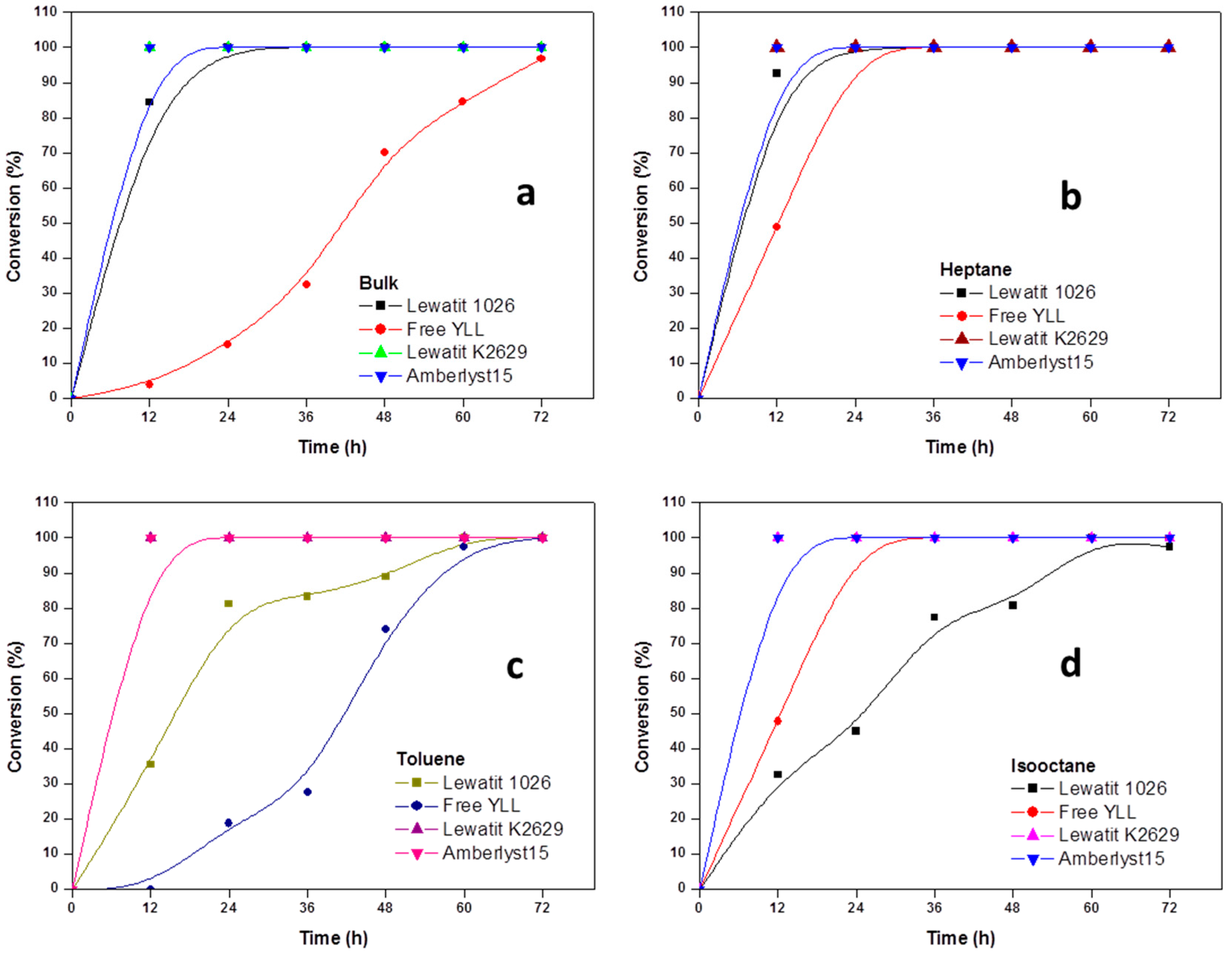 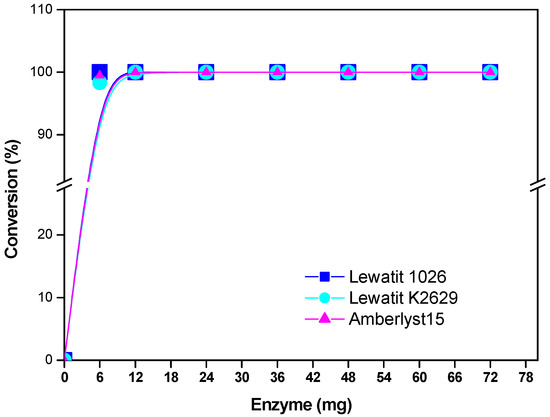 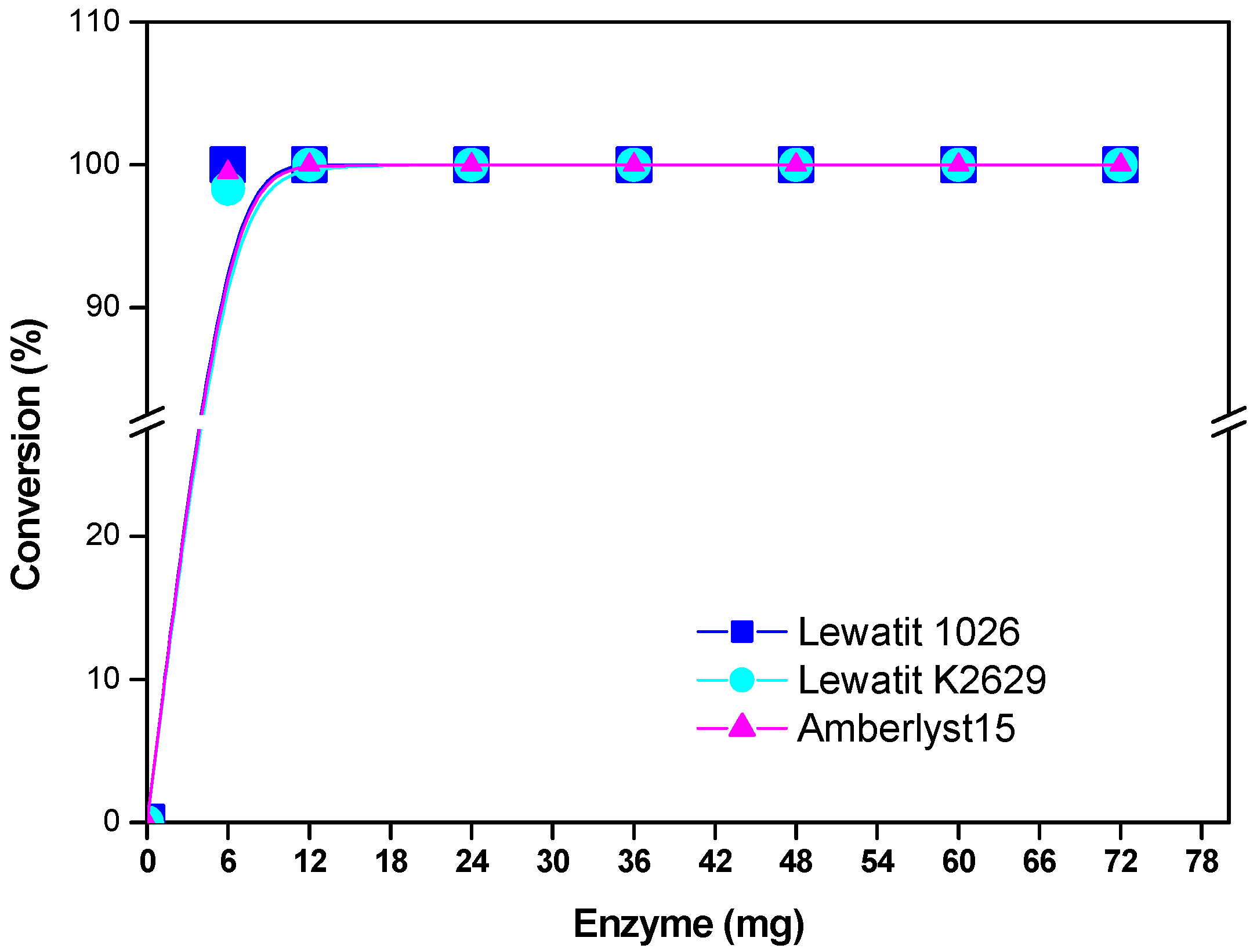 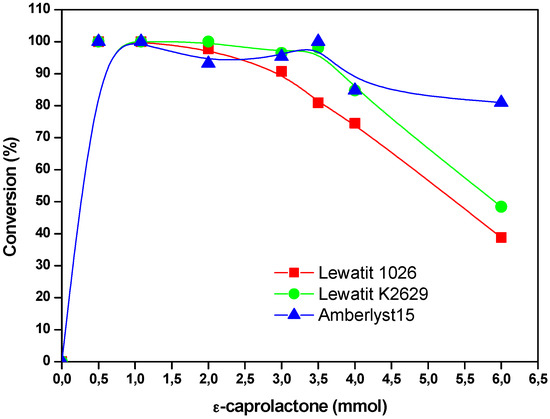