Larix decidua Bark as a Source of Phytoconstituents: An LC-MS Study
Previous Article in Special Issue

Although retinol is an important nutrient, retinol is highly sensitive to oxidation. At present, some ester forms of retinol are generally used in nutritional supplements because of its stability and bioavailability. However, such esters are commonly synthesized by chemical procedures which are harmful to the environment. Thus, this study utilized a green method using lipase as a catalyst with sonication assistance to produce a retinol derivative named retinyl laurate. Moreover, the process was optimized by an artificial neural network (ANN). First, a three-level-four-factor central composite design (CCD) was employed to design 27 experiments, which the highest relative conversion was 82.64%. Further, the optimal architecture of the CCD-employing ANN was developed, including the learning Levenberg-Marquardt algorithm, the transfer function (hyperbolic tangent), iterations (10,000), and the nodes of the hidden layer (6). The best performance of the ANN was evaluated by the root mean squared error (RMSE) and the coefficient of determination (R2) from predicting and observed data, which displayed a good data-fitting property. Finally, the process performed with optimal parameters actually obtained a relative conversion of 88.31% without long-term reactions, and the lipase showed great reusability for biosynthesis. Thus, this study utilizes green technology to efficiently produce retinyl laurate, and the bioprocess is well established by ANN-mediated modeling and optimization. View Full-Text
Keywords: retinol; lipase; retinyl laurate; sonication; artificial neural network (ANN); central composite design retinol; lipase; retinyl laurate; sonication; artificial neural network (ANN); central composite design
►▼ Show Figures 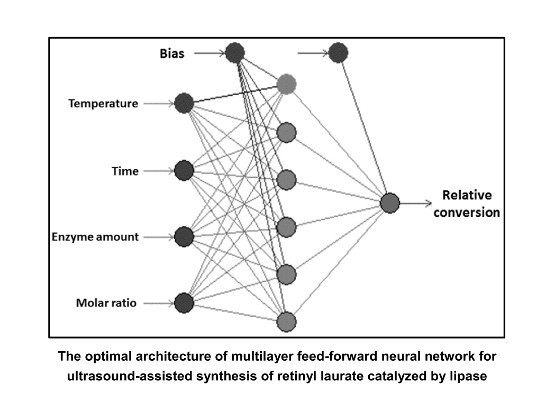