Selective Extraction of Flavonoids from Sophora flavescens Ait. by Mechanochemistry

:
The ethanolic extract of Lentinula edodes was partially analyzed and then characterized for its efficacy in treating atopic dermatitis. Polyphenols were determined to be the major antioxidant component in the extract (6.12 mg/g), followed by flavonoids (1.76 mg/g), β-carotene (28.75 μg/g), and lycopene (5.25 μg/g). An atopic dermatitis (AD) model was established and epidermal and dermal ear thickness, mast cell infiltration, and serum immunoglobulin levels were measured after oral administration of the L. edodes extract for 4 weeks. L. edodes extract decreased Dermatophagoides farinae extract (DFE) and 4-dinitrochlorobenzene (DNCB)-induced expression of several inflammatory cytokines in the ears, cervical lymph nodes, and splenocytes. Consequently, L. edodes extract may have therapeutic potential in the treatment of AD attributable to its immunomodulatory effects.
Keywords:
atopic dermatitis; Lentinula edodes; immunomodulatory; inflammatory cytokines 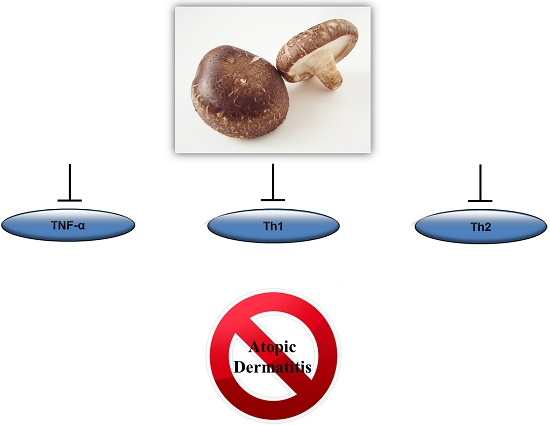 Wild mushrooms are highly valued as a nutritious and palatable food in many societies worldwide [1,2]. They contain high amounts of protein, low total fat levels, and a high proportion of polyunsaturated fatty acids, making them an excellent component of low-calorie diets [3,4]. Furthermore, mushrooms contain dietary fiber, peptides, lectins, phenolics, terpenes, alkaloids, vitamins, and minerals [5,6]. In addition to their nutritional value, many wild edible mushrooms have been investigated for their potential as neutraceutical agents. The antitumor, immunomodulatory, antimicrobial, antifungal, and antiviral properties of wild mushrooms are well established [7,8,9].
Lentinula edodes (commonly known as shiitake) is the second most cultivated edible mushroom in the world, representing about 25% of worldwide mushroom production; it has also been used as a food and medicine in South Korea and China for millennia. In the past 10 years, production of L. edodes has increased faster than that of any other mushroom species [10]. The bioactive compounds in L. edodes have been shown to have anti-tumor and antihypertensive effects [11,12,13,14,15]. L. edodes also contain lentinan and vitamin B12, which support the human immune response [16], as well as large amounts of ergosterol and fungisterol. Ultraviolet rays in sunlight can convert bioactive sterol constituents of L. edodes into vitamin D, which enhances human resistance to the common cold and other diseases. Meanwhile, there are some reports about inducing effects of L. edodes on respiratory symptoms or contact dermatitis [17,18,19,20,21,22,23,24,25]. However, there are also investigations about antiallergenic effects of some mushrooms including L. edodes and Grifola frondosa [26,27]. Therefore, in this study, we determined the chemical composition of an ethanolic extract of L. edodes and its efficacy in the treatment of AD. Chemical analysis included preliminary phytochemical screening of the L. edodes ethanolic extract as well as tests to determine carbohydrate and protein quantities, monosaccharide composition, and phenolic, flavonoid, carotenoid, lycopene, and ascorbic acid content. In addition, we used Fourier transform infrared spectroscopy (FT-IR) to further analyze the chemical composition of the L. edodes ethanolic extract. To clarify the mechanisms of L. edodes ethanolic extract in AD in vitro and in vivo, we investigated its immunomodulatory effects using keratinocyte and murine model, respectively.

Cultivated L. edodes (Sanjo 701) were obtained from the National Institute of Horticultural and Herbal Science of Korea. L. edodes specimens were lyophilized and subjected to three 2-h extractions in a 70% ethanol solution. The L. edodes extract was filtered (0.25 μm) and lyophilized in a freeze dryer for 5 days. TRIzol reagent for RNA extraction was received from Invitrogen (Carlsbad, CA, USA). Primary antibodies and peroxidase-conjugated secondary antibodies were purchased from Santa Cruz Biotechnology Inc. (Santa Cruz, CA, USA). All other reagents were of the highest grade that was commercially available at the time of the study.

3.2. Analysis of Polysaccharides and Monosaccharides

The total polysaccharide content of the extract was determined by the phenol-sulfuric acid method using d-glucose as a reference [52]. For the polysaccharide analysis, 1 mg of protein-bound polysaccharides was hydrolyzed with 2 M trifluoroacetic acid (TFA) and evaporated. A high-pressure liquid chromatography system (Waters, Milford, MA, USA) with a Sugar-Pak column (Millipore, Tokyo, Japan) and a differential refractive index (RI) detector (RID-6A) was used to detect monosaccharides at 80 °C.

HaCaT cells were cultured in Dulbecco’s modified Eagle’s medium (DMEM) supplemented with 10% fetal bovine serum and 10 μg/100 mL penicillin/streptomycin in a 5% CO2 atmosphere at 37 °C. For analysis by PCR and western blotting, HaCaT cells were pre-incubated with TNF-α (10 ng/mL) and IFN-γ (10 ng/mL) for stimulation. After 6 h of stimulation, cells were harvested and total RNA or protein isolated.

Eight-week-old female BALB/c mice were purchased from Samtako (Osan, Korea) and housed under specific pathogen-free conditions. All experiments were approved by the Institutional Animal Care and Use Committee of Konkuk University (KU14012).

3.8. Induction of AD Lesions in the Ear

AD was induced in the mice by repeated local exposure of the ears to Dermatophagoides farinae extract (DFE; house dust mite extract) and 2,4-dinitrochlorobenzene (DNCB) as previously described [60]. For the induction of AD, the mice were divided into four groups (control, AD only, AD + L. edodes 250 mg/kg, and AD + 500 mg/kg). The surface of both earlobes was stripped five times with surgical tape (Nichiban, Tokyo, Japan). After stripping, 20 μL of 1% DNCB was painted onto each ear; 4 days later, 20 μL of DFE (10 mg/mL) was painted onto each ear. DFE or DNCB treatment was alternated once per week for 4 weeks. Animals were oral administered L. edodes (250 or 500 mg/kg) throughout the 4 weeks of DFE and DNCB treatment.
Ear thickness was measured 24 h after DNCB or DFE application with a dial thickness gauge (ID-C1012XBS, Mitutoyo Co., Kawasaki, Japan). On days 14 and 28, blood samples were collected by orbital puncture. Plasma samples were prepared from the blood samples and stored at −70 °C for further analysis. After the final blood collection, the animals were euthanized and ears, cervical lymph nodes, and splenocyte were removed. Serum immunoglobulin (Ig)E and IgG2a levels were measured on days 14 and 28 after the DFE or DNCB treatment using an IgE enzyme-linked immunoassay kit (Bethyl Laboratories, Inc., Montgomery, TX, USA) according to the manufacturer’s instructions.

Excised ears were fixed in 4% paraformaldehyde for 16 h and embedded in paraffin. Thin (6 μm) sections were stained with hematoxylin and eosin (H & E). Epidermal and dermal thicknesses were measured under a microscope. For measurement of mast cell infiltration, skin sections were stained with toluidine blue, after which the number of mast cells was counted in five randomly chosen fields of view.

For the reverse transcription polymerase (RT)-chain reaction (PCR), the total cellular RNA was isolated from the ear tissue, cervical lymph nodes, and splenocytes of each treatment group using TRIzol according to the manufacturer’s protocol [46]. The first-strand complementary DNA (cDNA) was synthesized using Superscript II reverse transcriptase (Invitrogen). The conditions for RT-PCR were similar ones that have been previously described in related studies [60].
For the quantitative PCR, real-time PCR was performed in triplicate using 12.5 μL of SYBR Premix Ex Taq (Takara, Tokyo, Japan) and 2 μL of cDNA as a template in 25 μL of final volume. PCR amplification was preceded by incubation of the mixture for 15 min at 95 °C, and 40 cycles of the amplification step. The denaturation was performed for 30 s at 95 °C; annealing was performed in a transitional temperature range from 58 to 62 °C, with an increase of 0.5 °C per cycle; and the extension was performed for 30 s at 72 °C with fluorescence detection at 72 °C after each cycle. After the final cycle, melting-point analyses of all samples were performed within the range from 65 to 95 °C with continuous fluorescence detection. Target gene mRNA levels were normalized to GAPDH levels using the following formula: relative mRNA expression = 2−(ΔCt of target gene − ΔCt of GAPDH), where Ct is the threshold cycle value. In each sample, the expression level of the analyzed gene was normalized to that of GAPDH and presented as a relative mRNA level.

In the present study, we demonstrate that L. edodes extract ameliorates the development of DFE/DNCB-induced AD symptoms in BALB/c mice by reducing the severity of pathological lesions, production of IgE, and expression of inflammatory cytokines. The evidence provided above indicates that L. edodes extract is a potential therapeutic candidate for treating patients with AD. Furthermore, our data suggest that L. edodes extract may effectively prevent the occurrence of AD; therefore, it may also be useful as a cosmetic supplement as well as neutraceutical agent.

Eun-Ju Choi and Eun-Kyung Kim, both of them together performed the experiments, analyzed the data, and wrote the article. Zee-Yong Park was dedicated to writing and revising the article. 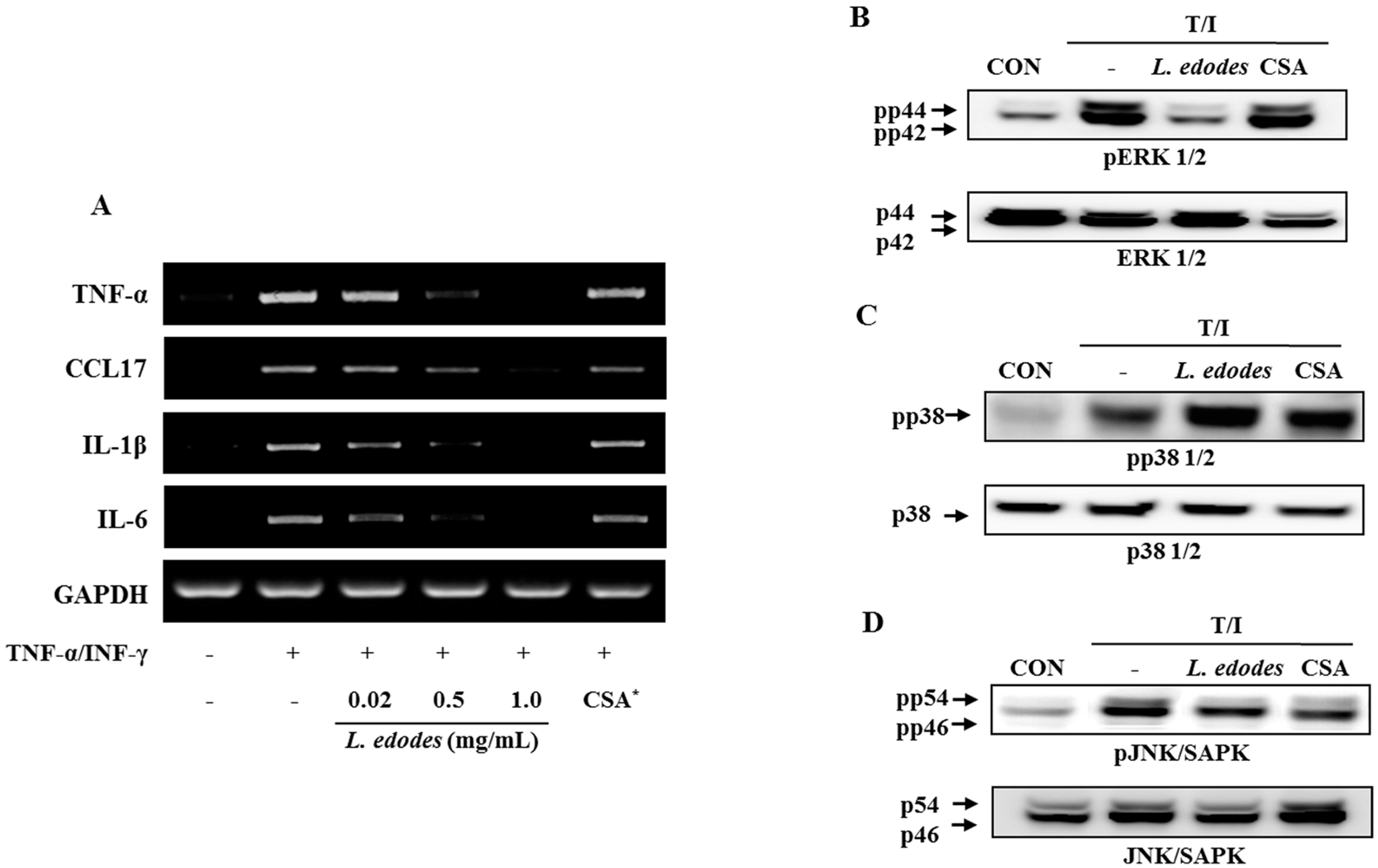 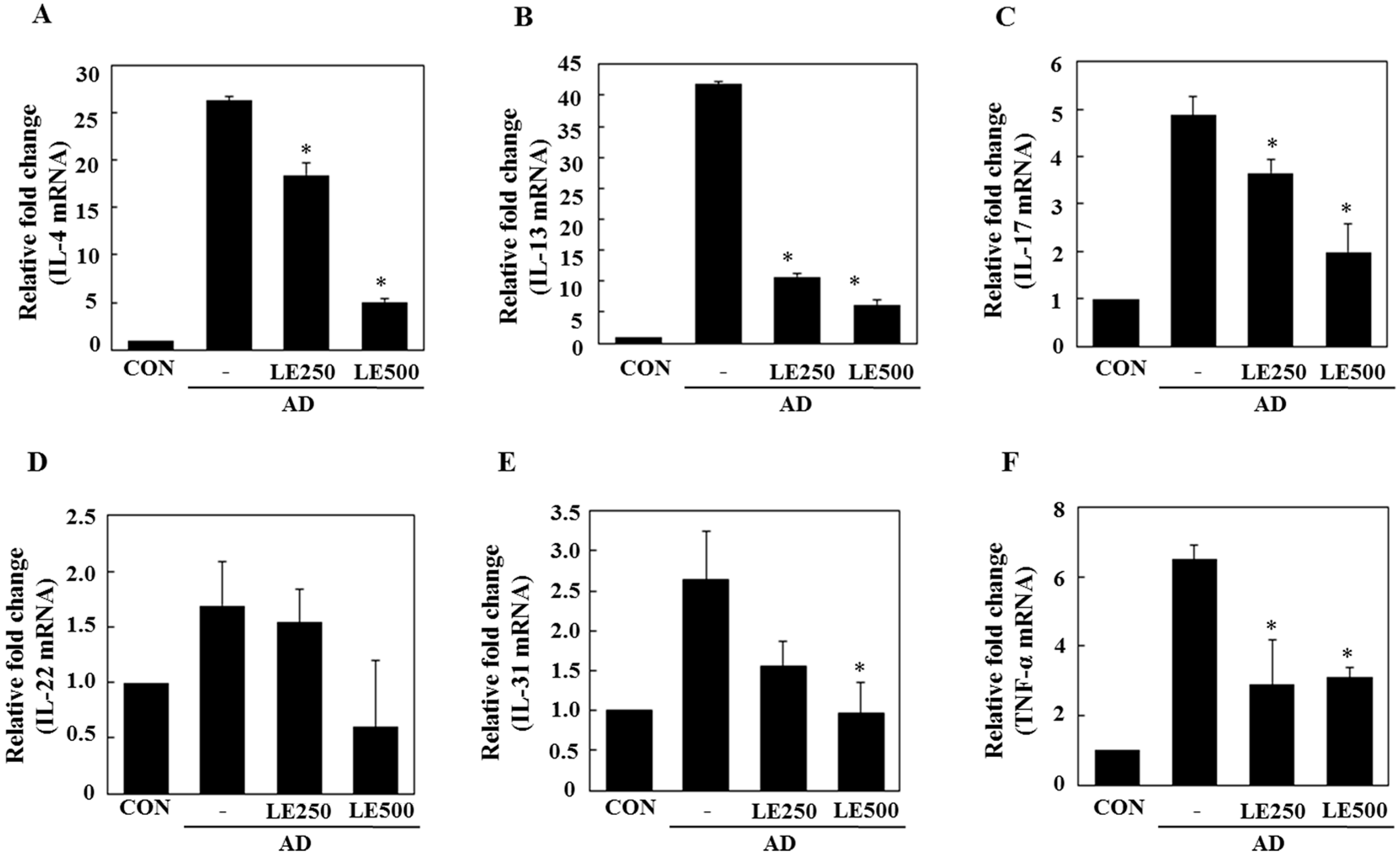