The quinoline ring system is one of the most ubiquitous heterocycles in the fields of medicinal and industrial chemistry, forming the scaffold for compounds of great significance. These include anti-inflammatory and antitumor agents, the antimalarial drugs quinine and chloroquine, and organic light-emitting diodes. Quinolines were first synthesized in 1879, and since then a multitude of synthetic routes have been developed. Many of these methods, such as the Skraup, Doebner–Von Miller, and Friedlander quinoline syntheses, are well-known but suffer from inefficiency, harsh reaction conditions, and toxic reagents. This review focuses on recent transition metal-free processes toward these important heterocycles, including both novel routes and modifications to established methods. For example, variations on the Skraup method include microwave irradiation, ionic liquid media, and novel annulation partners, all of which have shown increased reaction efficiency and improved yield of the heteroring-unsubstituted quinoline products. Similarly, modifications to other synthetic routes have been implemented, with the quinoline products displaying a wide variety of substitution patterns. View Full-Text
Keywords: quinoline; heterocycle; metal-free quinoline; heterocycle; metal-free
►▼ Show Figures 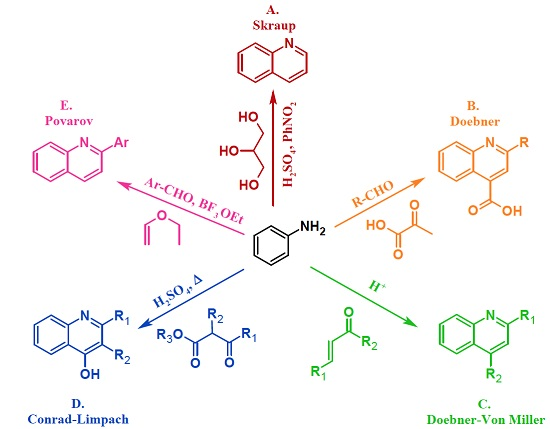