In this study, we developed electrostatically self-assembled ternary nanocomplexes as a safe and effective non-viral vector for the delivery of plasmid DNA (pDNA) into human adipose-derived stem cells (hASCs). Although polyethylenimine (PEI) polymers initially showed excellent performance as gene delivery carriers, their broad use has been limited by cytotoxicity resulting from their strong positive charge. To reduce the cytotoxicity, we utilized anionic hyaluronic acid (HA) as a corona layer material for pDNA/PEI binary nanocomplexes. HA was also introduced to increase the targeting efficiency of pDNA/PEI nanocomplexes because HA has can bind CD44 that is highly expressed on the surface of hASCs. We confirmed that the addition of HA changed the surface charge of pDNA/PEI nanocomplexes from positive to negative. The pDNA/PEI/HA ternary nanocomplexes showed high transfection efficiency and low cytotoxicity compared with commercially available products. When hASCs were pretreated with HA to passivate CD44, the transfection efficiency of pDNA/PEI/HA nanocomplexes was significantly reduced. These results suggest that HA that can act as a targeting ligand to CD44 contributed to the improved transfection of pDNA into hASCs. Our novel pDNA/PEI/HA nanocomplexes may be used as an effective non-viral pDNA delivery system for hASCs.
Keywords: non-viral vector; ternary nanocomplex; self-assembly; hyaluronic acid; adipose derived stem cells non-viral vector; ternary nanocomplex; self-assembly; hyaluronic acid; adipose derived stem cells

Mesenchymal stem cells (MSCs) are a promising source for stem cell-based regenerative medicine because of their ability to differentiate into multiple cell types including bone, cartilage, fat, and muscle [1,2,3,4,5]. Thus, controlling MSC growth and differentiation by genetic modification represents a crucial strategy for improving the regenerative ability of MSCs in injured tissue. In this context, transferring target genes into MSCs by a variety of delivery methods is a powerful tool for controlling MSC function [6]. Current methods for introducing functional genes into MSCs involve vectors derived from viruses such as lentiviruses, retroviruses, and adenoviruses [6,7,8]. However, the clinical use of viral gene delivery vectors presents some problems, such as mutagenesis, pathogenic risk, and triggering a host immune response. In addition, limitations in exogenous DNA packaging capacity and large scale production remain, although viral vectors can efficiently deliver genes into cells [9]. Non-viral gene delivery vectors can overcome problems associated with viral methods, although non-viral gene delivery vectors also have some issues, such as high toxicity, low transfection efficiency, and biodegradability [9,10,11]. To increase cellular uptake of non-viral gene delivery vectors, previous studies have focused on the use of biocompatible polymers. Recently, ternary complexes have been developed using anionic biocompatible polymers such as alginic acid [12], heparin [13], and poly (γ-glutamic acid) [14], to reduce cytotoxicity and improve the transfection ability of non-viral gene delivery vectors. Hyaluronic acid (HA) is one such polymer that is negatively charged at physiologic pH values, and is a component of the extracellular matrix throughout the body. HA is also known to specifically bind the CD44 receptor. MSCs including bone marrow-derived and adipose-derived MSCs are generally known to have hyaladherins such as CD44, CD54, and CD168 present on their cell surfaces [15]. In previous studies, low molecular weight HA improved transfection efficiency of polyplexes by CD44 receptor-mediated uptake in human corneal epithelial cells [16]. In this study, we developed electrostatically self-assembled ternary nanocomplexes by incorporating branched polyethylenimine (PEI) as a plasmid DNA carrier and low molecular weight HA (4–8 kDa) not only to facilitate CD44 receptor-mediated uptake of ternary nanocomplexes into human adipose-derived MSCs (Figure 1), but also to reduce the toxicity of cationic PEI. After fabrication and characterization of our fabricated pDNA/PEI/HA ternary nanocomplexes, their transfection efficiency was investigated and compared with the performance of the commercial lipid-based agent X-tremeGENE.

The cytotoxicity of a gene delivery vector is one of the important factors to be considered before clinical application. However, highly cationic polymers and commercial gene transfection reagents are commonly known to be toxic [6,9]. To investigate possible cytotoxic effects of pDNA/PEI and pDNA/PEI/HA nanocomplexes, hASCs were treated with each nanocomplex formulation and cell viability was measured by MTS assay. As shown in Figure 4b, pDNA/PEI nanocomplexes were toxic to hASCs, but pDNA/PEI/HA nanocomplexes did not show any significant cytotoxicity.

Prior to evaluating the CD44-targeting effect of pDNA/PEI/HA, we first confirmed the degree of CD44 receptor expression on the surface of hASCs membrane using an FITC-conjugated anti-CD44 antibody. Through flow cytometry and fluorescence microscopy images, we confirmed that CD44 was highly expressed on hASC surfaces (Figure 7a,b). To confirm that the pDNA/PEI/HA nanocomplexes were taken into hASCs by an HA-specific CD44 receptor-mediated pathway, hASCs were transfected with pDNA/PEI/HA ternary nanocomplexes after blocking CD44 by pretreatment with free HA. As shown in Figure 7c, transfection efficiency was significantly decreased when CD44 was blocked by free HA. As another control experiment, negatively charged poly (γ-glutamic acid) (γ-PGA) was used as a corona layer to form pDNA/PEI/γ-PGA ternary nanocomplexes [20]. However, the gene transfection efficiency of pDNA/PEI/γ-PGA ternary nanocomplexes showed little change after pretreatment with HA. These results strongly suggest that pDNA/PEI/HA complexes were taken into hASCs through CD44 receptor-mediated pathway. Through these experiments, we confirmed that HA can be utilized as a corona layer for pDNA/PEI binary nanocomplexes to increase the targeting these nanocomplexes to CD44 which is highly expressed on hASC surfaces, and to reduce toxicity (Figure 8).

The hASCs (StemPro Human Adipose-Derived Stem Cells) were purchased from Life Technologies and cultured in 75-cm2 flasks using MesenPRO RSTM Medium Kit and L-glutamine according to the manufacturer’s instructions.

3.3. Preparation and Characterization of Ternary Nanocomplexes

Plasmid DNA (pDNA; pCXLE-EGFP, 10.9 kbp) from addgene (Cambridge, MA, USA) was amplified in E. coli, and then extracted and purified using a plasmid purification midi kit (Qiagen, Valencia, CA, USA). The pDNA concentration was determined by measuring UV absorbance of the sample at 260 nm. The pDNA/PEI/HA ternary complexes were prepared as shown in Figure 1. First, pDNA/PEI binary complexes with an N/P ratio of 8 were prepared by mixing 1 mL of pDNA (100 µg/mL) with 1 mL of PEI and incubating the mixture for 30 min at room temperature. Then, 1 mL of HA solution in MOPs buffer (varying concentrations) was added to obtain pDNA/PEI/HA ternary complexes with N/P/C ratios of 5, 10, and 20, followed by incubation for 30 min at room temperature.
The size, size distribution, and surface charge of the complexes were measured via dynamic light scattering (DLS) (ELS-Z, Photal, Otsuka, Japan) within 1 h after complex formation. Morphology of the complexes was observed using a scanning electron microscope (SEM, JSM-7000F, JEOL Ltd. Tokyo, Japan). To prepare samples for SEM analysis, samples were diluted with deionized water and dropped onto silicon wafers. After that, samples were dried for 24 h at room temperature.

pDNA binding capability of polymer in the complexes was determined by an agarose gel retardation assay. The complexes were prepared as described above, mixed with DNA loading buffer, and loaded into a 1.0% agarose gel in tris-acetate-EDTA (TAE) buffer containing 0.5 µg/mL ethidium bromide (Sigma-Aldrich). The samples were electrophoresed at 100 V for 30 min. The gel was visualized using a UVP M-20 Benchtop Transilluminator and BioDoc-It Imaging System (UVP, Upland, CA, USA).

The cytotoxicity of the complexes was evaluated using MTS-based CellTiter 96 AQueous Assay reagent (Promega, Madison, WI, USA) according to manufacturer’s instructions. Briefly hASCs were plated at a density 1 × 104 cells per well in flat-bottomed 96-well plates (Corning Costar, Cambridge, MA, USA) and were incubated at 37 °C. After 24 h, the hASCs were incubated with 4 µL of pDNA/PEI binary complex or 6 µL of pDNA/PEI/HA ternary complexes for 24 or 48 h. For the MTS assay, 10 µL of MTS reagent was added into each well containing 100 µL of culture medium, and then the plates were incubated for 3 h at 37 °C. Absorbance of the wells was detected at 490 nm by a microplate reader (VersaMax, Molecular Devices, Sunnyvale, CA, USA).

To obtain the fluorescence images of hASCs after transfection with each sample, hASCs were incubated with complexes in a μ-slide 8-well chamber (Ibidi, Martinsried, Germany) at a density of 1 × 104 cells per well for 24 h at 37 °C. The cells were then washed in cold PBS, fixed with 4 % (w/v) paraformaldehyde solution for 20 min at room temperature and stained with 2 µg/mL Hoechst 33342 (trihydrochloride, trihydrate, Life Technologies) in PBS for 15 min. Fluorescence images were obtained using a DeltaVision PD (Applied Precision Technologies, Issaquah, WA, USA, filters set to excitation: 490/20 and 360/40; emission: 526/36 and 455/50) (Omega Optical, Brattleboro, VT, USA). 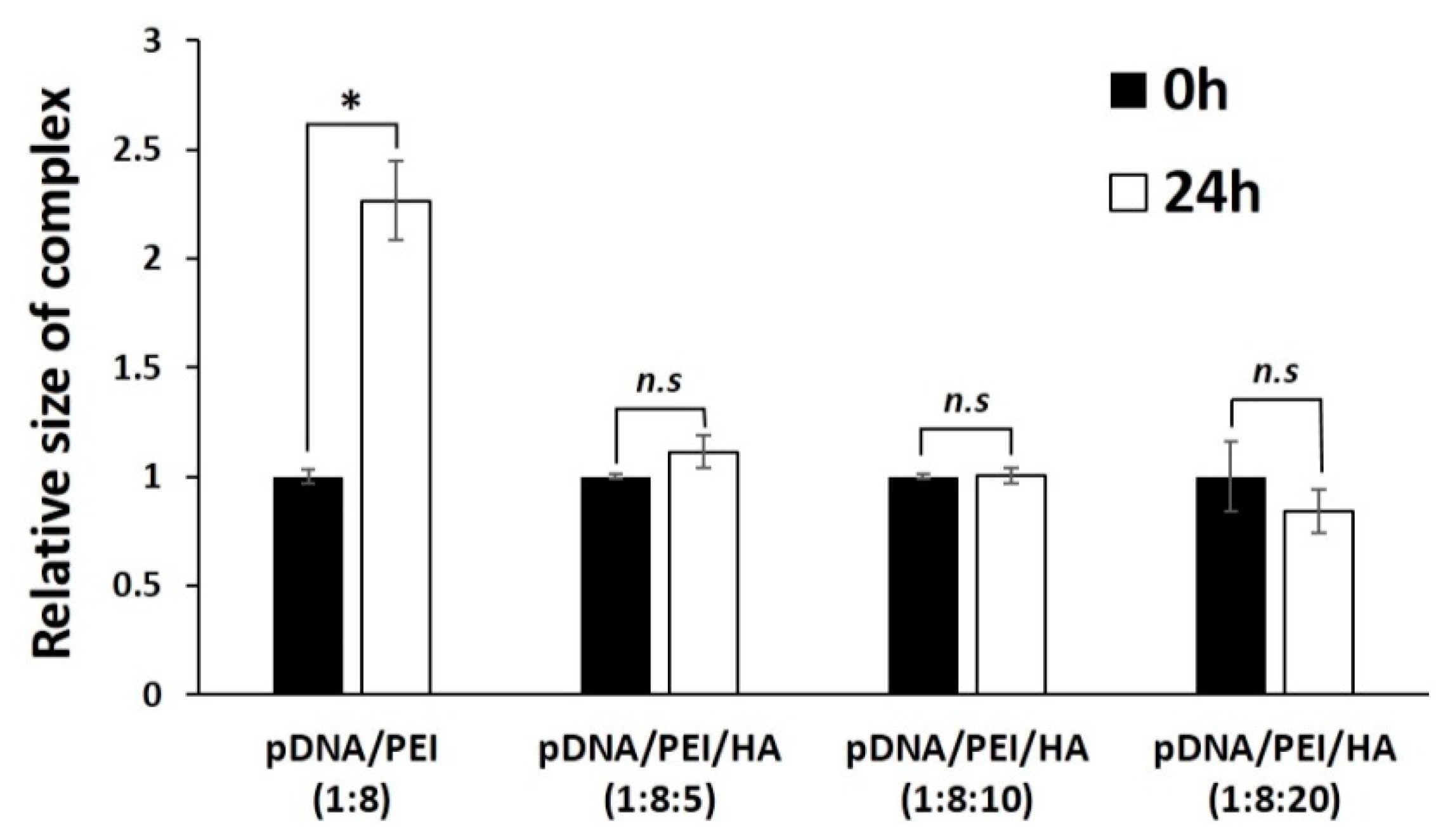 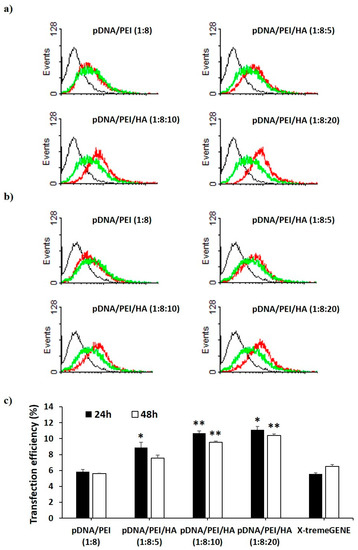 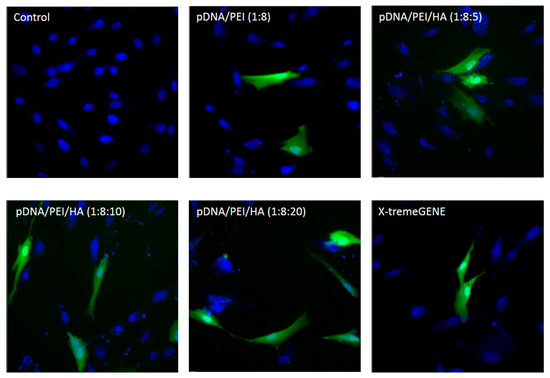 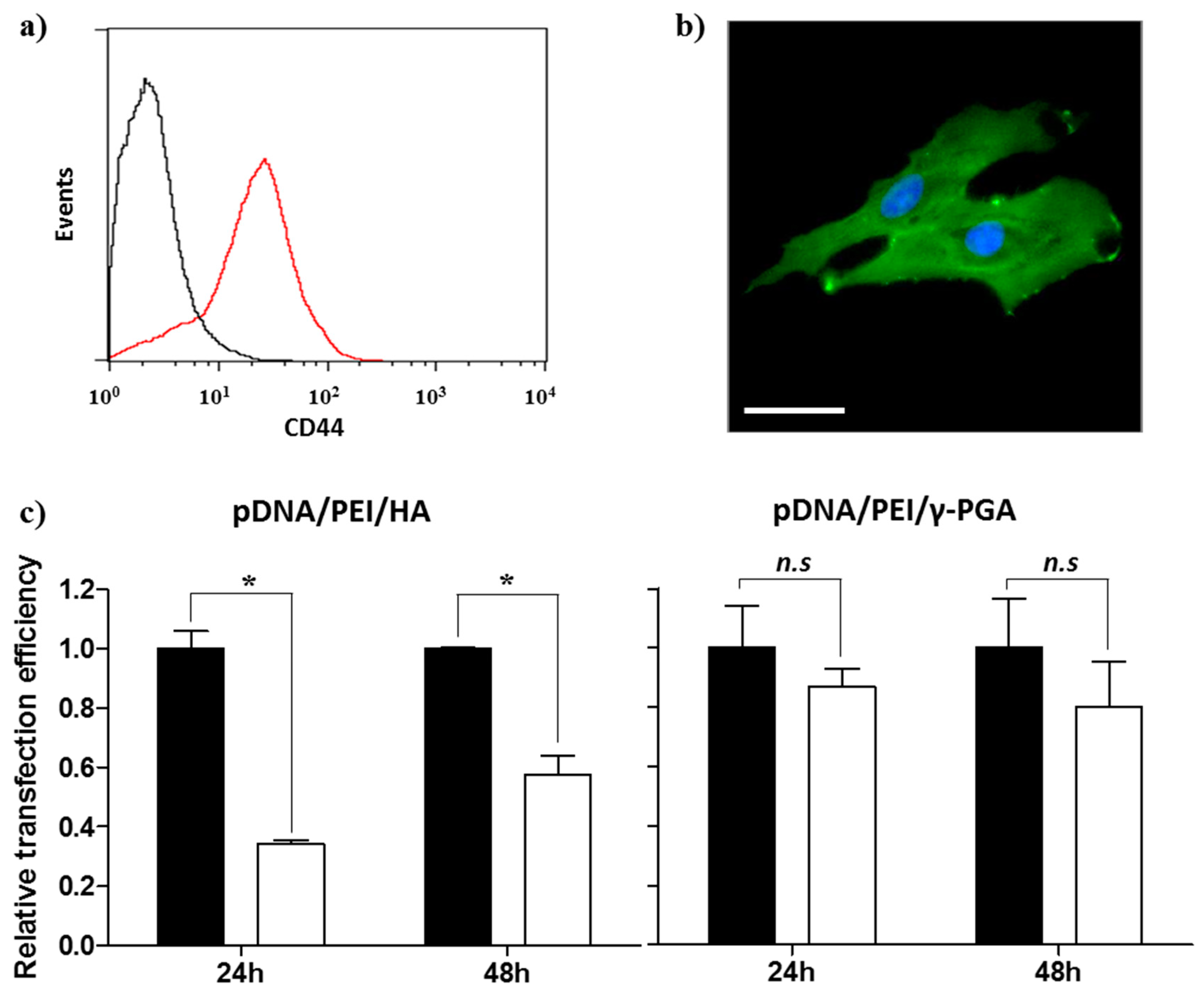 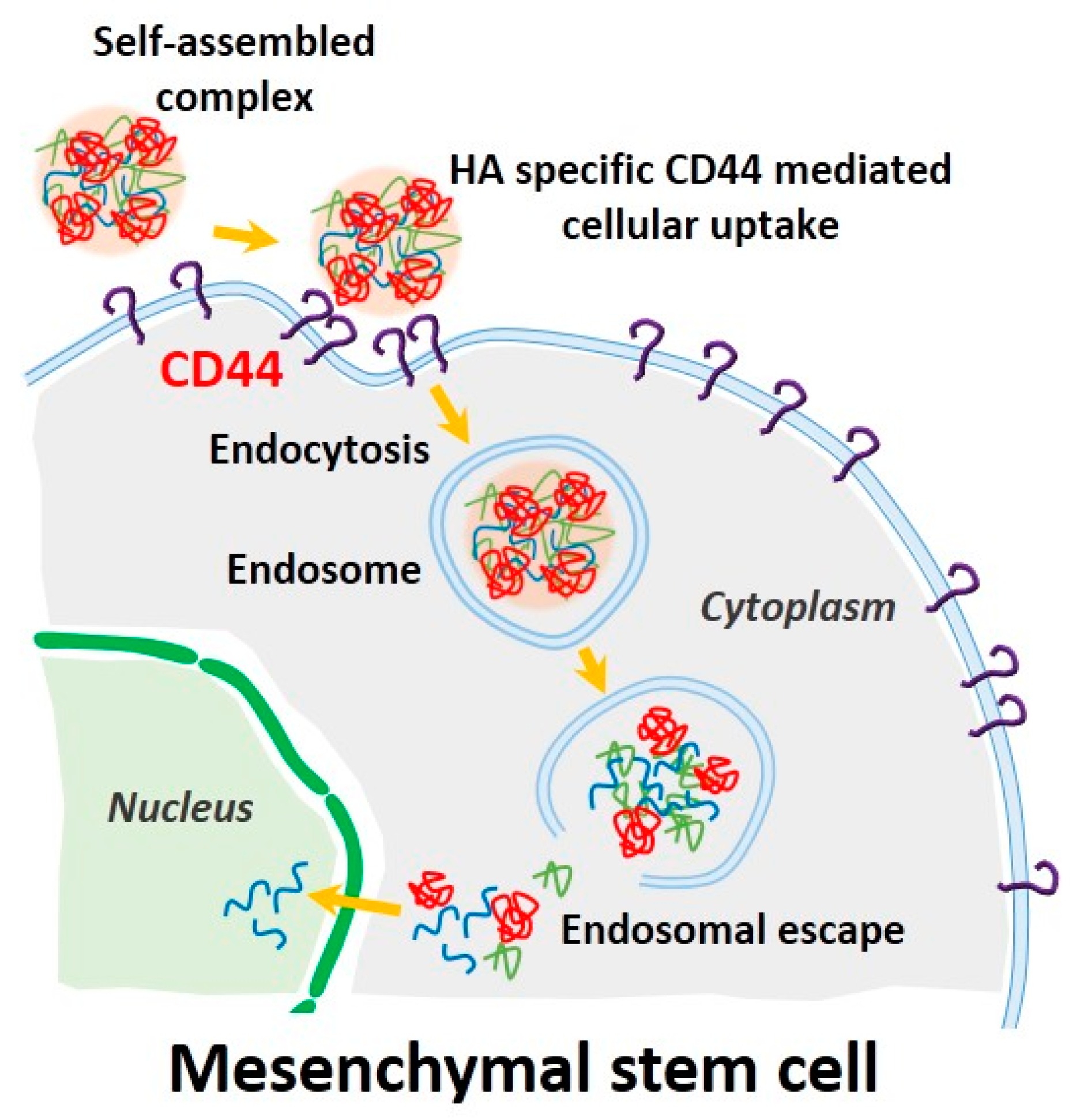 Table 1. The size and zeta-potential of binary and ternary nanocomplexes.
Each data value represents the mean ± S.E. (n = 4).