Nano-TiO2 is widely applied in the automobile exhaust hose reels as a catalyst to reduce oxynitride emissions, including nitric oxide (NO). In the biomedicine field, NO plays an important role in vasodilation and edema formation in human bodies. However, the deswelling activity of nano-TiO2 has not been reported. Here, we demonstrated that nano-TiO2 can significantly degrade the production of NO in LPS-induced RAW264.7 mouse macrophages. Further study indicated that nano-TiO2 exhibited an effect on vascular permeability inhibition, and prevented carrageenan-induced footpad edema. Therefore, we prepared a nano-TiO2 ointment and observed similar deswelling effects. In conclusion, nano-TiO2 might act as a novel deswelling agent related with its degradation of NO, which will aid in our ability to design effective interventions for edema involved diseases. View Full-Text
Keywords: nano-TiO2; nitric oxide; deswelling activity; vascular permeability; nano-TiO2 ointment nano-TiO2; nitric oxide; deswelling activity; vascular permeability; nano-TiO2 ointment
►▼ Show Figures 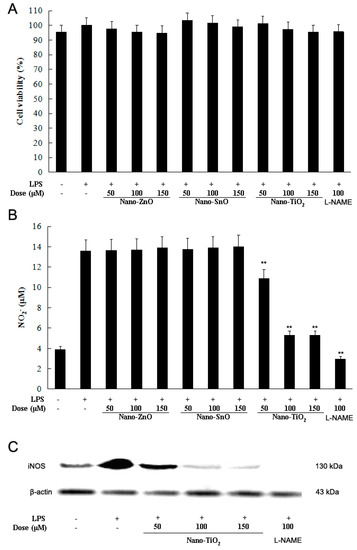