In this study, we developed electrostatically self-assembled ternary nanocomplexes as a safe and effective non-viral vector for the delivery of plasmid DNA (pDNA) into human adipose-derived stem cells (hASCs). Although polyethylenimine (PEI) polymers initially showed excellent performance as gene delivery carriers, their broad use has been limited by cytotoxicity resulting from their strong positive charge. To reduce the cytotoxicity, we utilized anionic hyaluronic acid (HA) as a corona layer material for pDNA/PEI binary nanocomplexes. HA was also introduced to increase the targeting efficiency of pDNA/PEI nanocomplexes because HA has can bind CD44 that is highly expressed on the surface of hASCs. We confirmed that the addition of HA changed the surface charge of pDNA/PEI nanocomplexes from positive to negative. The pDNA/PEI/HA ternary nanocomplexes showed high transfection efficiency and low cytotoxicity compared with commercially available products. When hASCs were pretreated with HA to passivate CD44, the transfection efficiency of pDNA/PEI/HA nanocomplexes was significantly reduced. These results suggest that HA that can act as a targeting ligand to CD44 contributed to the improved transfection of pDNA into hASCs. Our novel pDNA/PEI/HA nanocomplexes may be used as an effective non-viral pDNA delivery system for hASCs. View Full-Text
Keywords: non-viral vector; ternary nanocomplex; self-assembly; hyaluronic acid; adipose derived stem cells non-viral vector; ternary nanocomplex; self-assembly; hyaluronic acid; adipose derived stem cells
►▼ Show Figures 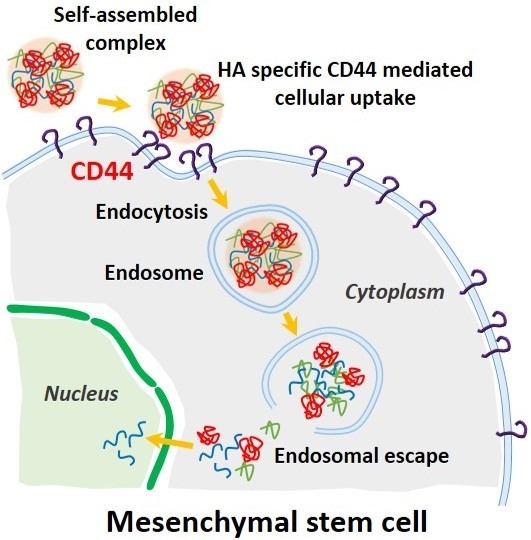