Chemopreventive and Therapeutic Effects of Edible Berries: A Focus on Colon Cancer Prevention and Treatment
Previous Article in Journal

Application of Bioactive Quercetin in Oncotherapy: From Nutrition to Nanomedicine

Olive Oil and the Hallmarks of Aging

Aging is a multifactorial and tissue-specific process involving diverse alterations regarded as the “hallmarks of aging”, which include genomic instability, telomere attrition, epigenetic alterations, loss of proteostasis, deregulated nutrient sensing, mitochondrial dysfunction, cellular senescence, stem cell exhaustion and altered intracellular communication. Virtually all these hallmarks are targeted by dietary olive oil, particularly by virgin olive oil, since many of its beneficial effects can be accounted not only for the monounsaturated nature of its predominant fatty acid (oleic acid), but also for the bioactivity of its minor compounds, which can act on cells though both direct and indirect mechanisms due to their ability to modulate gene expression. Among the minor constituents of virgin olive oil, secoiridoids stand out for their capacity to modulate many pathways that are relevant for the aging process. Attenuation of aging-related alterations by olive oil or its minor compounds has been observed in cellular, animal and human models. How olive oil targets the hallmarks of aging could explain the improvement of health, reduced risk of aging-associated diseases, and increased longevity which have been associated with consumption of a typical Mediterranean diet containing this edible oil as the predominant fat source. View Full-Text
Keywords: DNA damage; fatty acids; hallmarks of aging; Mediterranean diet; olive oil; oxidative stress; polyphenols; senescence DNA damage; fatty acids; hallmarks of aging; Mediterranean diet; olive oil; oxidative stress; polyphenols; senescence
►▼ Show Figures 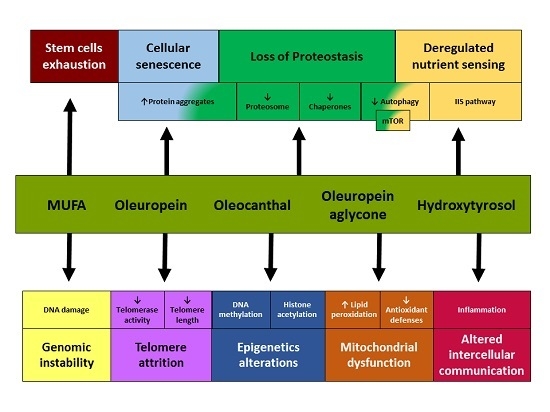