Beyond Causal Explanation: Einstein’s Principle Not Reichenbach’s
Next Article in Special Issue

The precise mechanisms connecting the cardiovascular system and the cerebrospinal fluid (CSF) are not well understood in detail. This paper investigates the couplings between the cardiac and respiratory components, as extracted from blood pressure (BP) signals and oscillations of the subarachnoid space width (SAS), collected during slow ventilation and ventilation against inspiration resistance. The experiment was performed on a group of 20 healthy volunteers (12 females and 8 males; BMI kg/m; age years). We analysed the recorded signals with a wavelet transform. For the first time, a method based on dynamical Bayesian inference was used to detect the effective phase connectivity and the underlying coupling functions between the SAS and BP signals. There are several new findings. Slow breathing with or without resistance increases the strength of the coupling between the respiratory and cardiac components of both measured signals. We also observed increases in the strength of the coupling between the respiratory component of the BP and the cardiac component of the and vice versa. Slow breathing synchronises the SAS oscillations, between the brain hemispheres. It also diminishes the similarity of the coupling between all analysed pairs of oscillators, while inspiratory resistance partially reverses this phenomenon. BP–SAS and SAS–BP interactions may reflect changes in the overall biomechanical characteristics of the brain. View Full-Text
Keywords: time series; nonlinear dynamics; coupling time series; nonlinear dynamics; coupling
►▼ Show Figures 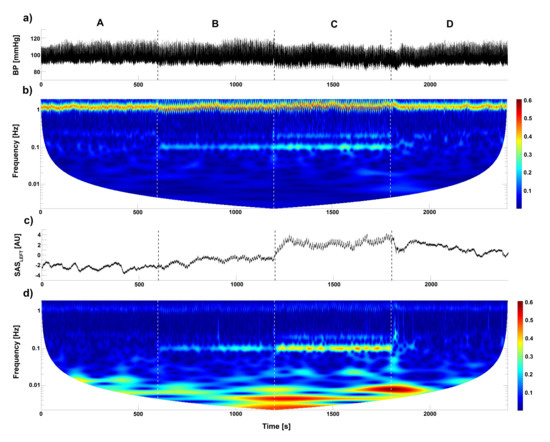