Entropic Matroids and Their Representation
Next Article in Special Issue

Entropy applications in hydrometric network design problems have been extensively studied in the most recent decade. Although many studies have successfully found the optimal networks, there have been assumptions which could not be logically integrated into their methodology. One of the major assumptions is the uncertainty that can arise from data processing, such as time series simulation for the potential stations, and the necessary data quantization in entropy calculations. This paper introduces a methodology called ensemble-based dual entropy and multiobjective optimization (EnDEMO), which considers uncertainty from the ensemble generation of the input data. The suggested methodology was applied to design hydrometric networks in the Nelson-Churchill River Basin in central Canada. First, the current network was evaluated by transinformation analysis. Then, the optimal networks were explored using the traditional deterministic network design method and the newly proposed ensemble-based method. Result comparison showed that the most frequently selected stations by EnDEMO were fewer and appeared more reliable for practical use. The maps of station selection frequency from both DEMO and EnDEMO allowed us to identify preferential locations for additional stations; however, EnDEMO provided a more robust outcome than the traditional approach. View Full-Text
Keywords: EnDEMO; hydrometric network; network design; monitoring; entropy; ensemble; uncertainty; information theory; multiobjective optimization EnDEMO; hydrometric network; network design; monitoring; entropy; ensemble; uncertainty; information theory; multiobjective optimization
►▼ Show Figures 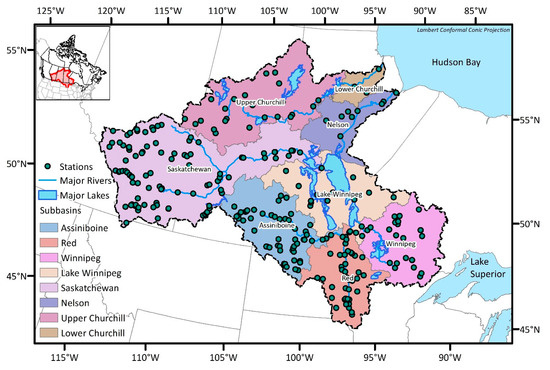