The objective of this study was to develop and characterize cassava-starch-based films incorporated with buriti (Mauritia flexuosa L.) oil and emulsifier (Tween 20). An experimental factorial design 22 with three central points was used to develop the films, by varying the concentrations of buriti oil (0.15 to 0.45% w/v) and emulsifier (0.02 to 0.04% w/v). Film thickness and weight increased with increasing buriti oil concentration. The water vapor permeability of the films ranged from 0.22 to 0.366 g mm h−1 m−2 kPa−1. The tensile strength values varied from 4.21 to 6.95 MPa, the elasticity modulus varied from 538.53 to 722.78 MPa, and elongation to rupture varied from 1.13 to 1.66%. The film color was characterized as yellowish, dark, and intense (higher oil content); and clear and a low-intensity color (lower oil content). The films presented a total carotenoid content ranging from 3.63 to 29.73 μg β-carotene/g, which may have resulted in their antioxidant potential against DPPH• (1,1-diphenyl-2-picryl-hydrazyl) radical (from 74.28 to 87.74%). The central formulation of the experimental design (buriti oil 0.30% and emulsifier 0.03%) presented a good performance and can be applied as packaging for foods with a lower water content and that demand protection against oxidation. View Full-Text
Keywords: biopolymer; Mauritia flexuosa L.; food packaging biopolymer; Mauritia flexuosa L.; food packaging
►▼ Show Figures 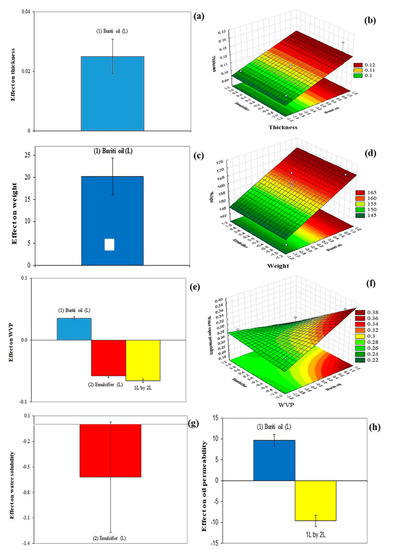