Utilization of Water-Cooled and Air-Cooled Slag Aggregate in Concrete: A Solution to the Secular Economy
Previous Article in Journal

Integrating LCA with Process Modeling for the Energetic and Environmental Assessment of a CHP Biomass Gasification Plant: A Case Study in Thessaly, Greece

In this section, wave propagations in prestressed small-scale plates with SMA nanoscale wires are formulated using a scale-dependent plate model. Figure 1 illustrates a small-scale plate made of five layers reinforced by SMA nanoscale wires. Let us indicate the length, thickness and width of each layer by lx, h and ly, respectively. Furthermore, Poisson’s ratio, elasticity moduli, shear modulus and density of the small-scale plate are denoted by , , and , respectively. For these properties, we have [41] where and indicate the martensite fraction and volume fraction of SMA nanoscale wires, respectively; “LP”, “W” and “P” are used to refer to the laminated plate, SMA nanoscale wires and plate, respectively. Using one-dimensional Brinson’s model, for a SMA nanoscale wire, one obtains [42,43] in which “mar” and “aus” are used to refer to the martensite and austenite phases, respectively. The martensite fraction is determined by two dominant factors as follows where
Here “str”, “tem” and “0” denote the stress, temperature and initial value of a factor, respectively. Using one-dimensional Brinson’s model, we have the following relation for the martensite fraction where where T and are, respectively, the temperature and stress; Afin, Asta and CA are, respectively, the finish temperature of the austenite phase, start temperature of this phase and critical stress slope. Let us denote the mid-plane displacement in z, y and x directions by w, v and u, respectively. For the normal and shear strains, one can write where
Taking into account a scale parameter in the form of in which e0 and ac are a calibration constant and an internal characteristic length [44,45], the constitutive relation is where
In Equations (9) and (10), , and stand for the elasticity constants of the plate, the recovery stress and angle of SMA nanoscale wires, respectively; represents the Laplace operator. Taking into account a reinforced small-scale plate made of n layers, the stress resultants are
Furthermore, the recovery stress resultants are as follows
Employing Equations (9) and (11) together with Equation (8), we obtain the following equations for the stress resultants where and
Applying Hamilton’s principle leads to motion equations as follows where mLP is the mass per unit area of the small-scale plate. Substituting Equations (13) and (14) into Equations (17)–(19), the coupled equations for the wave propagation in the small-scale plate are obtained as where is the in-plane load induced by initial stresses, which is obtained by where denotes initial stresses. Assuming non-uniformly distributed initial stresses along the thickness of the small-scale plate, we have in which and . Moreover, a and b are constants, which determine the variation of initial stress. In order to determine the phase and group velocities of the small-scale plate with SMA nanoscale wires, the displacements along the length, width and thickness directions are expressed as [46] in which kj (j = x,y) represents wave numbers; , and indicate wave amplitude coefficients; is the frequency of the small-scale plate. Substituting Equation (25) into Equations (20)–(22) leads to a matrix equation as follows where
The frequency of the small-scale plate with SMA nanoscale wires is calculated from the following relation where “” is used to denote the determinant. Assuming k = kx = ky, the general wave number is obtained as . The phase velocity (cp) is defined as
In addition, the group velocity (cg) is determined as follows
An ultrasonic wave dispersion in a reinforced multilayered small-scale plate depends on the stress, any components and their distributions, as well as the drive frequency. It is important to notice that there are many studies on stress evaluation by the ultrasonic velocity [47,48]. In other words, a wave propagation analysis can be used as a tool to measure the stress in a structural element.

The effects of non-uniformly distributed initial stresses on the wave propagation in small-scale plates with SMA nanoscale wires have been investigated. A scale-dependent model of plates was proposed utilizing the nonlocal elasticity in conjunction with Brinson’s model. The differential equations for scale-dependent wave propagations in the small-scale system were derived. The influences of non-uniformly distributed initial stresses together with SMA effects on the phase and group velocities were explored. It was observed that a greater tensile initial stress leads to an increase in both the phase and group velocities of the small-scale plate with SMA nanoscale wires since tensile prestresses improve the total equivalent structural stiffness of reinforced multilayered small-scale plates. However, greater scale parameters of stress nonlocality result in lower phase and group velocities as this parameter has a decreasing influence on the equivalent structural stiffness. The volume fraction and orientation of SMA nanoscale wires can be utilized as a controlling factor for the wave propagation characteristics of prestressed small-scale plates. It was also found that both group and phase velocities increase when the non-uniform coefficient increases. The group and phase velocities of the small-scale plate with initial stress of quadratic tensile profile are higher than those of linear and uniform profiles. 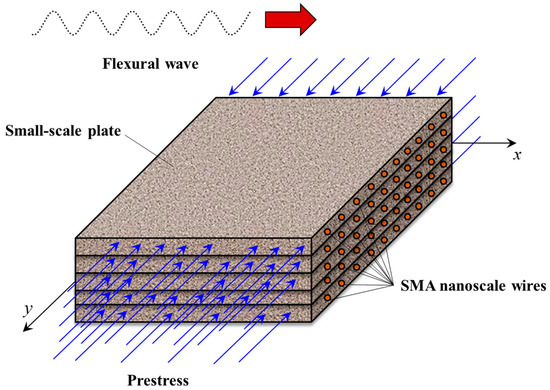 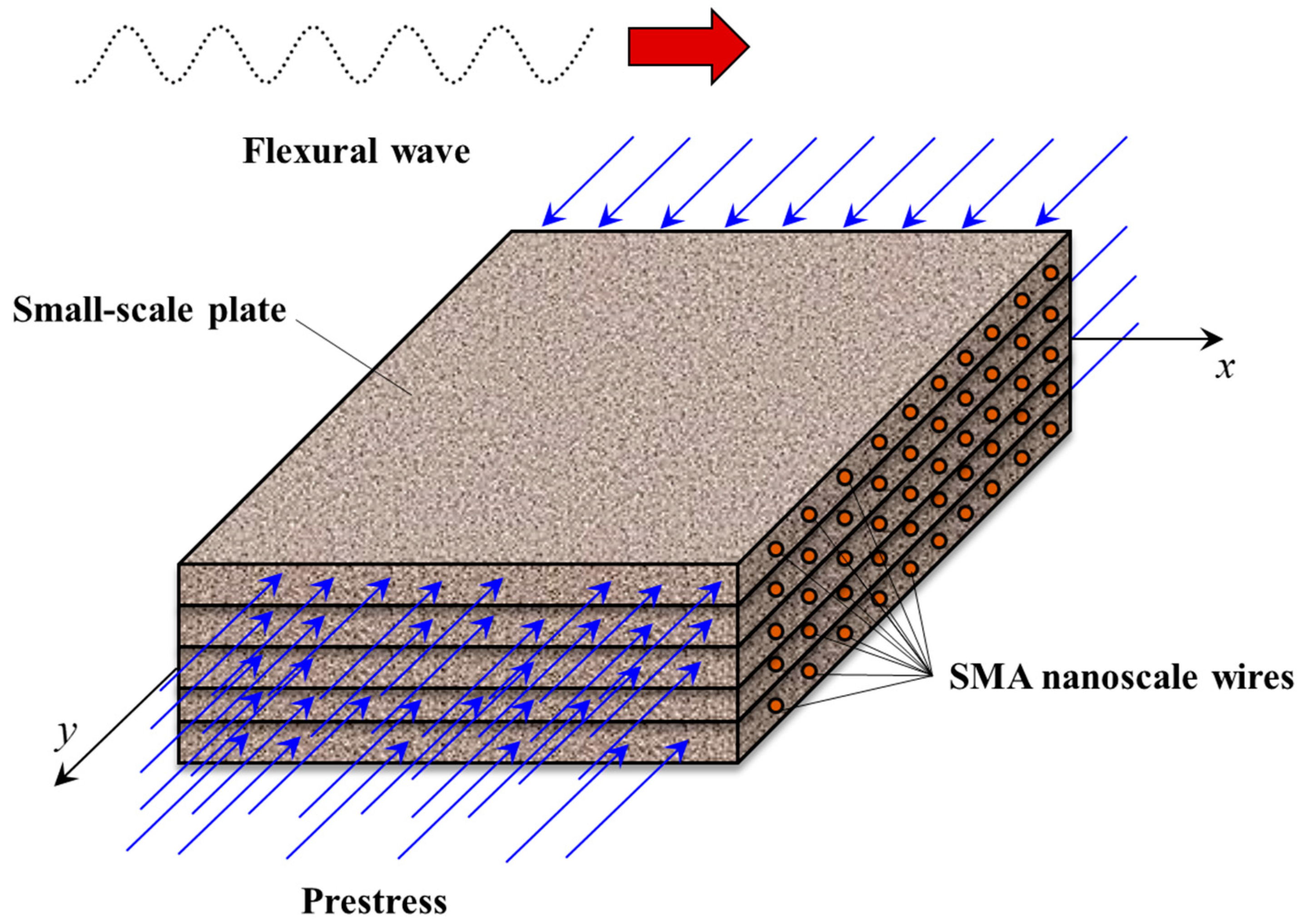 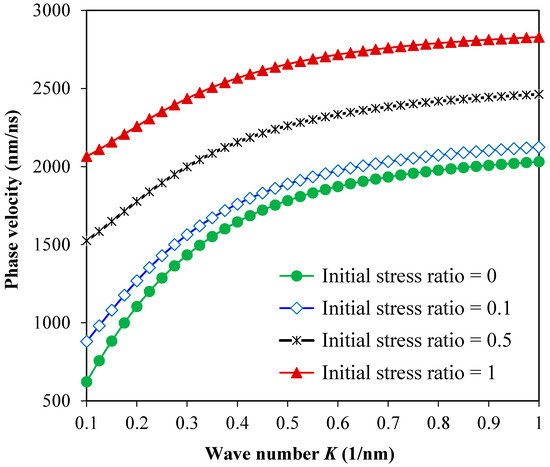 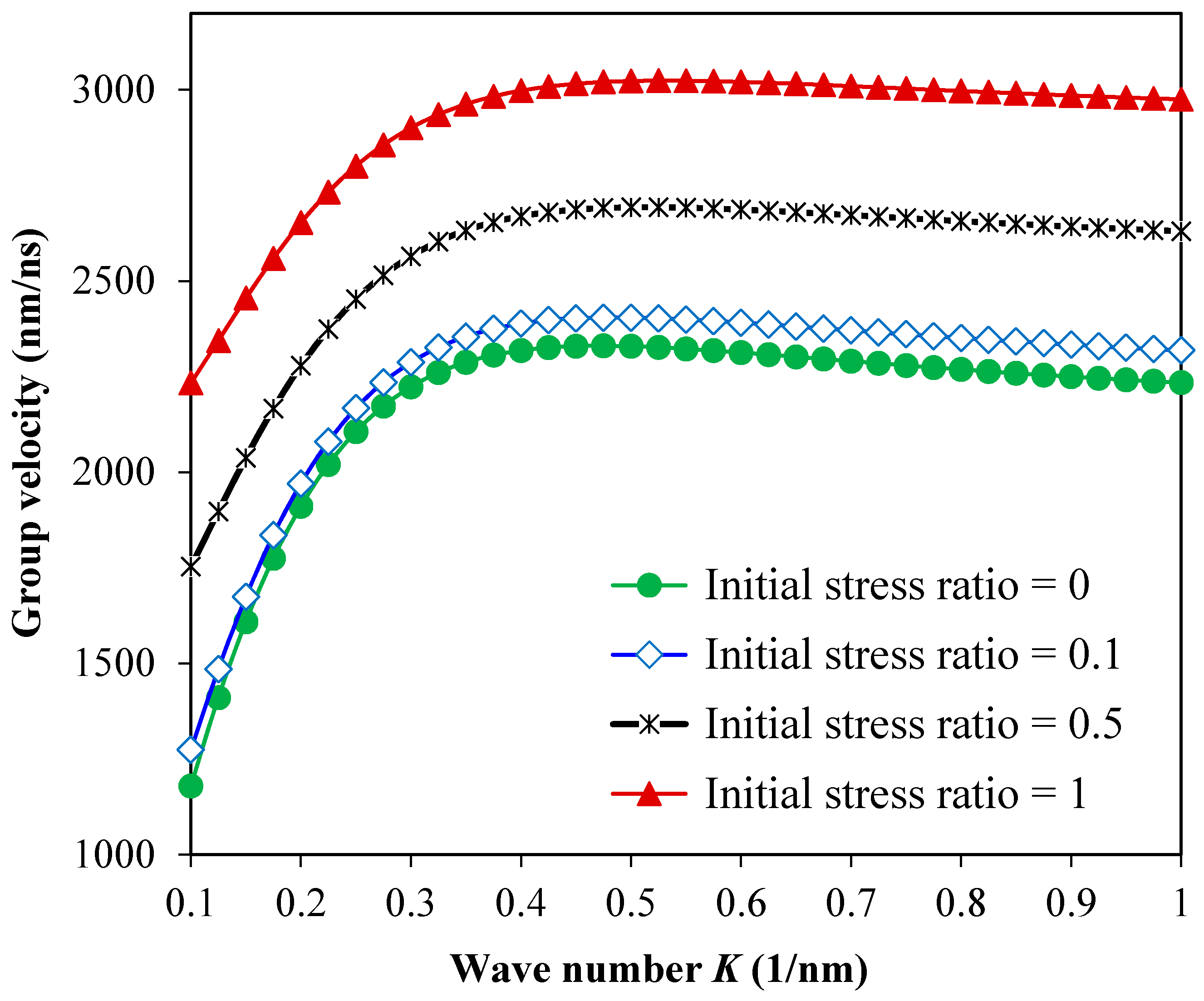 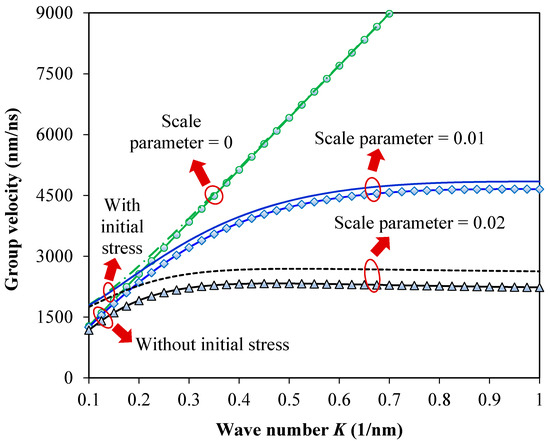 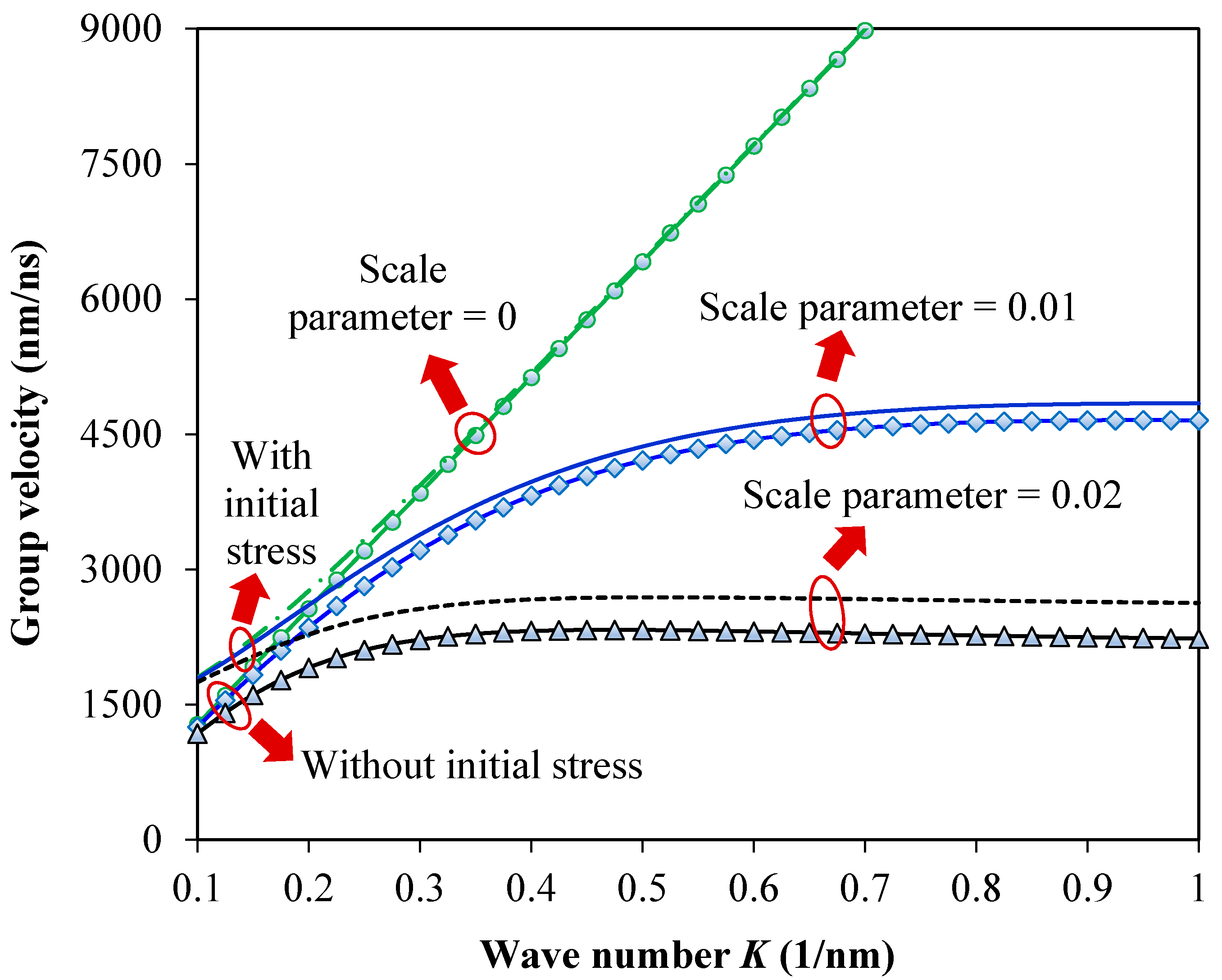 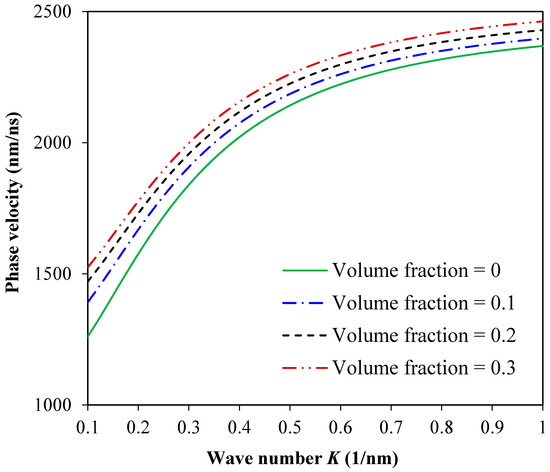 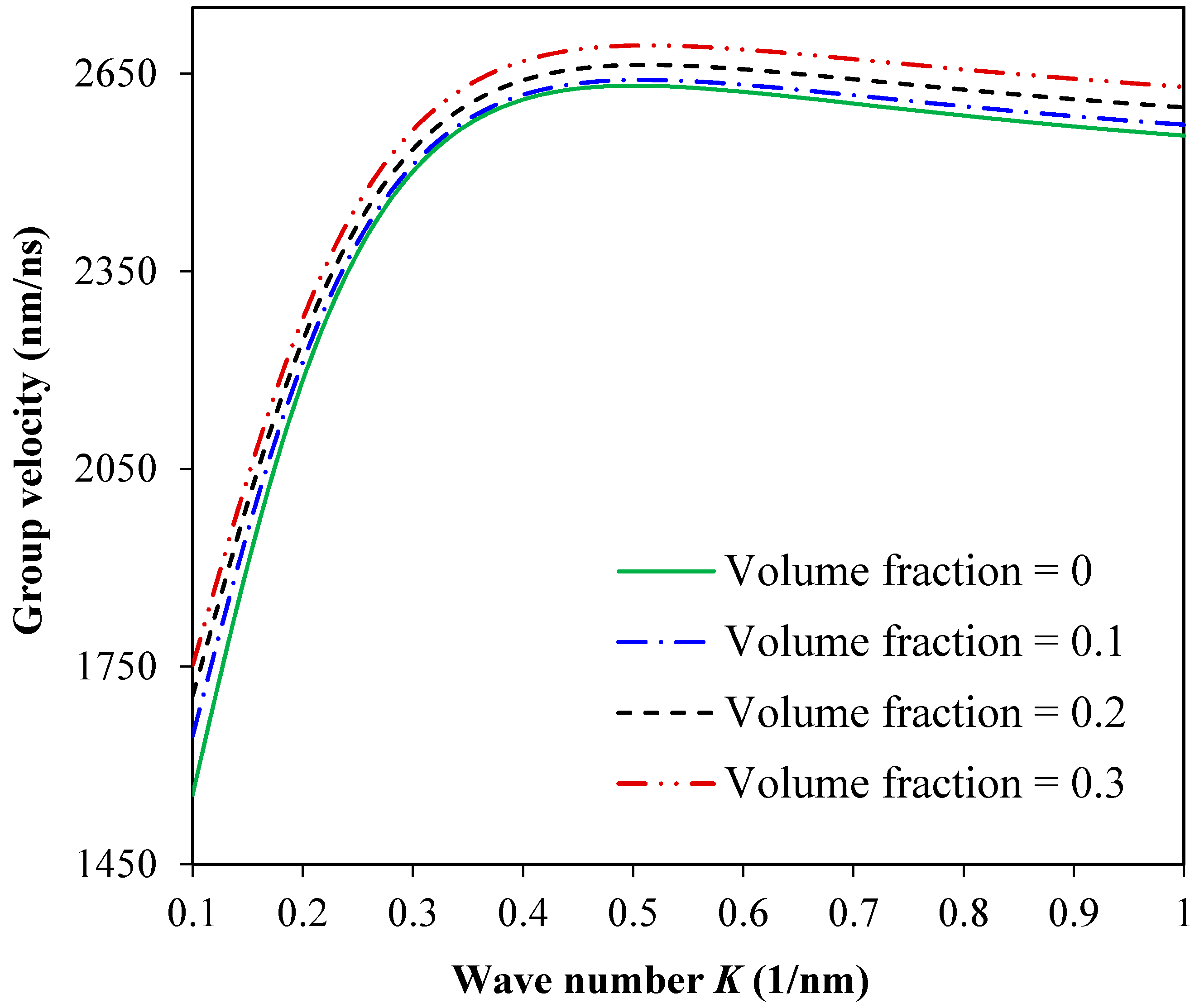 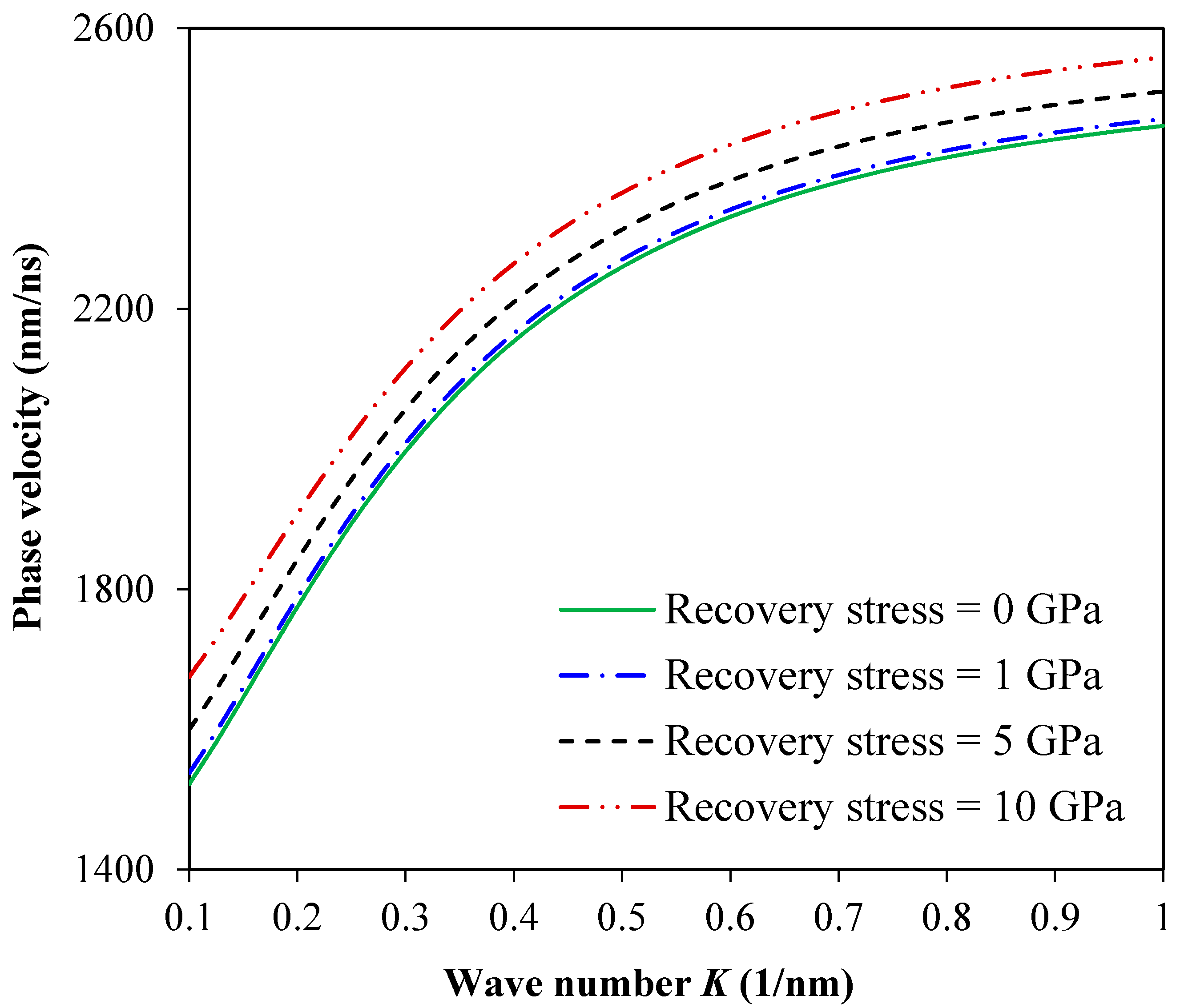 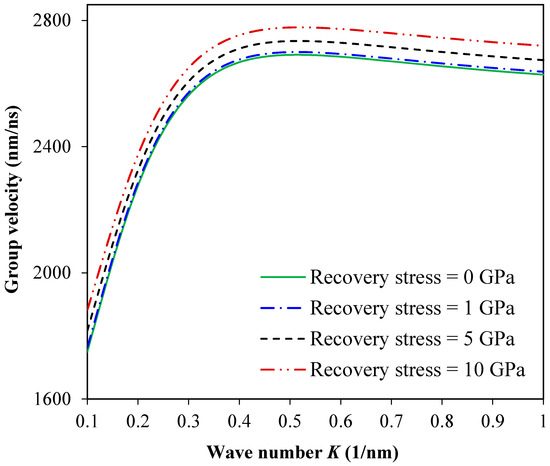 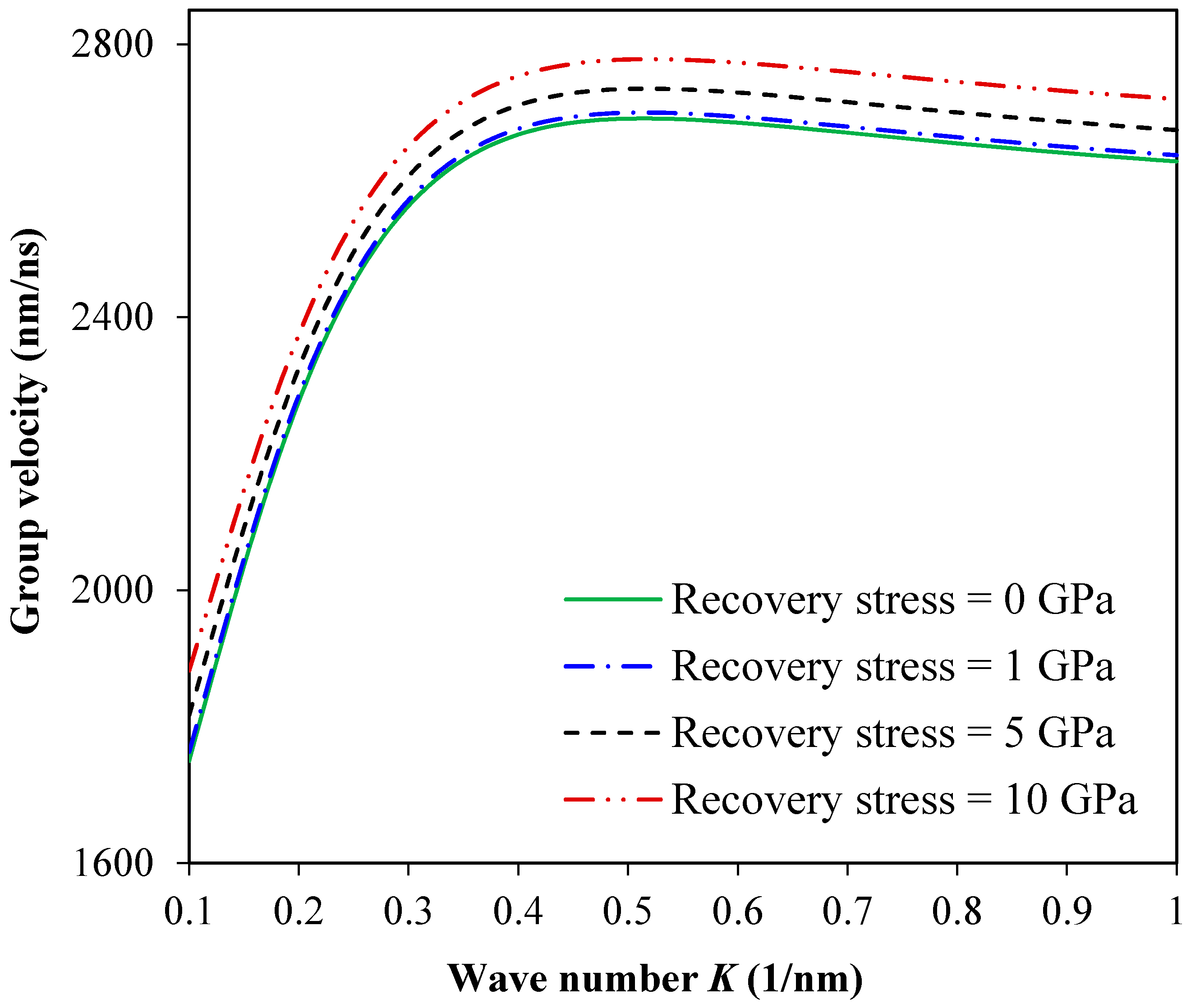 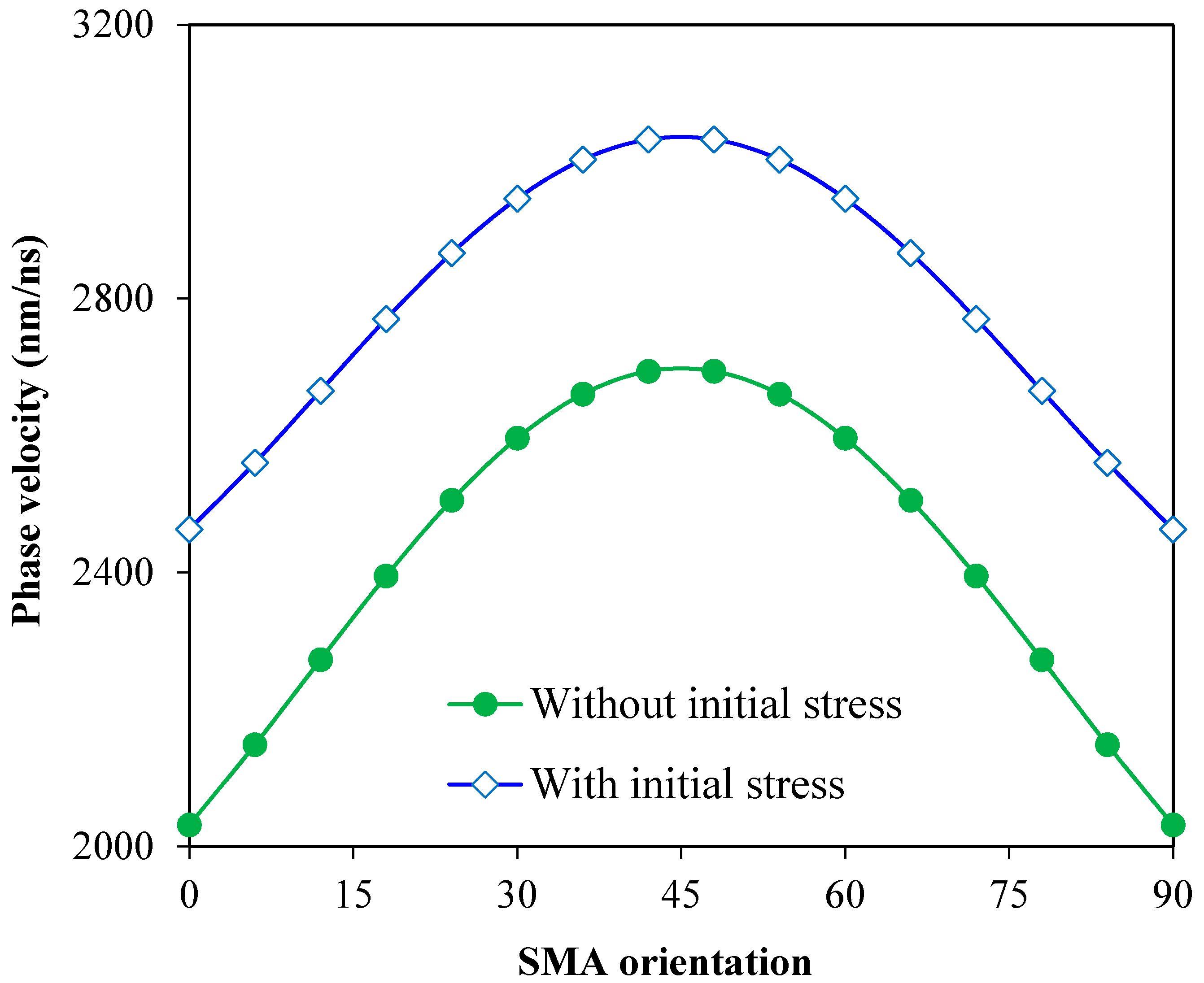 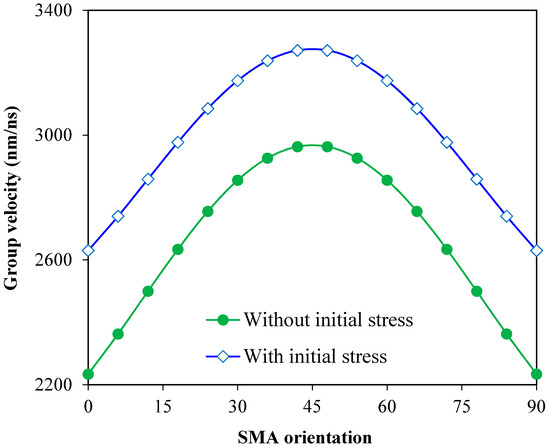 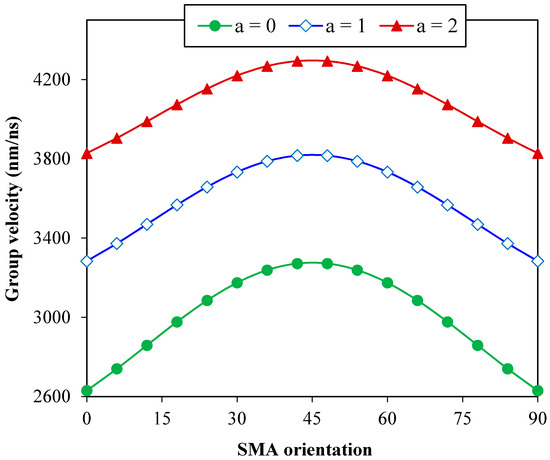 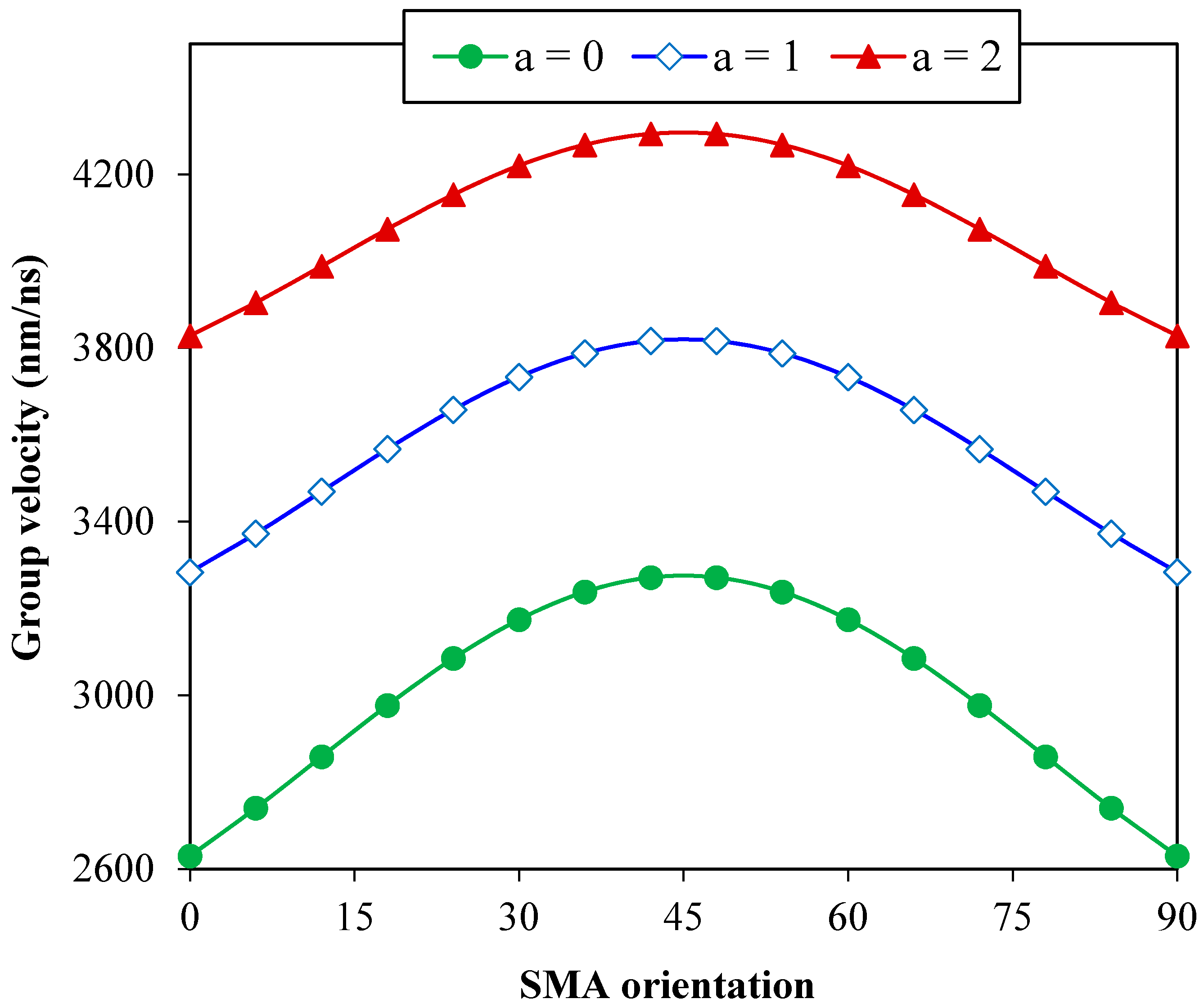 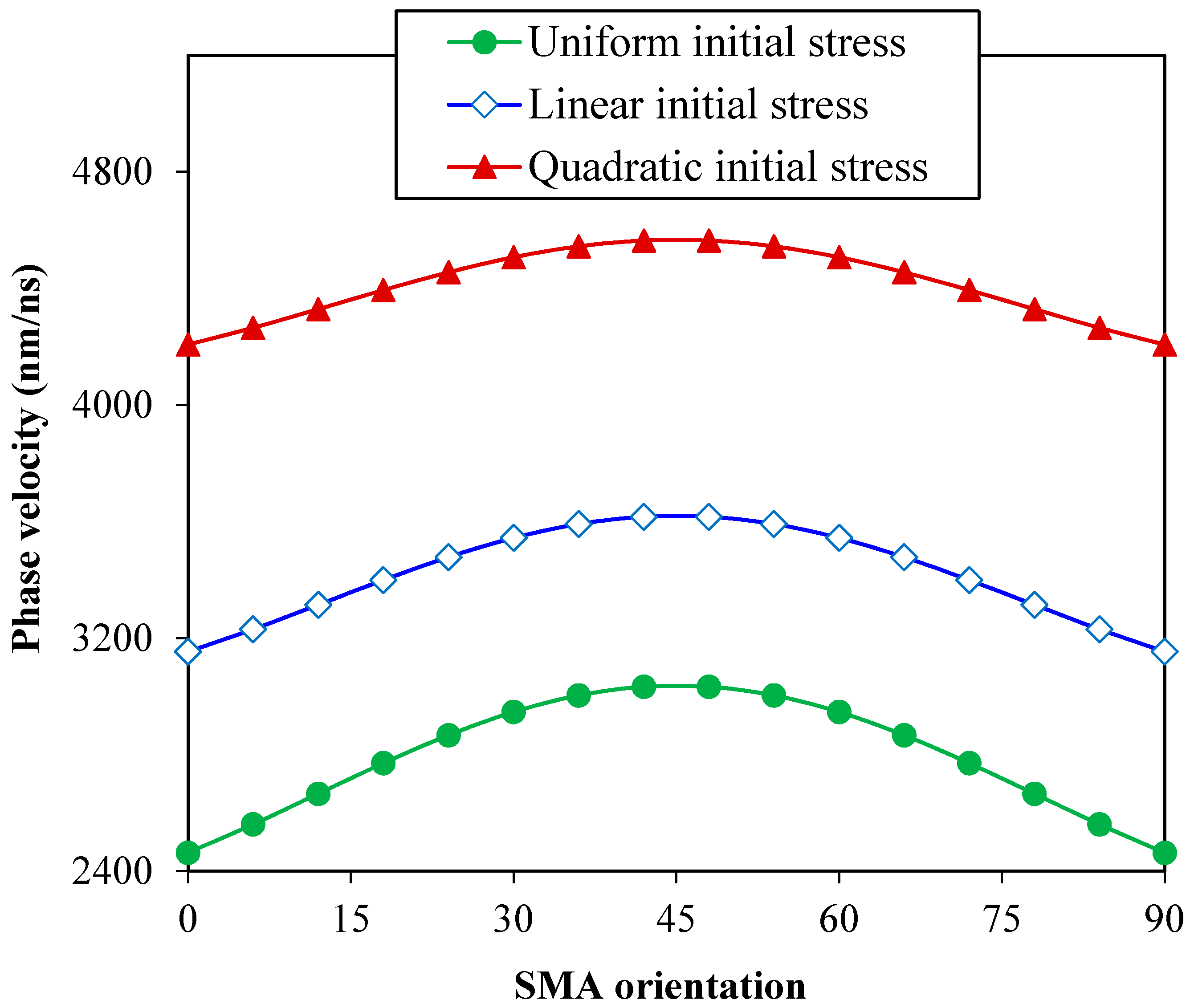