Composition of Reduced Mechanisms for Ignition of Biodiesel Surrogates

Chemical kinetics mechanisms describing Fatty Acid Methyl Ester (FAME) biofuel combustion are quite extensive and cannot be implemented in Computational Fluid Dynamics simulations of real engine systems. Using the reduction methodology Ant Colony Reduction (ACR), skeletal reduction followed by optimization has been performed for the C-11 FAME biodiesel components methyl decanoate (MD), methyl 5-decenoate (MDe5), and methyl 9-decenoate (MDe9), and for the alkane n-decane. The aim of the present study was to produce small reduced mechanisms accurately describing ignition of the fuels over a wide range of conditions, and in addition to compare the size and composition of reduced mechanisms constructed from two parent mechanisms of different complexity. Reduction targets were ignition delay times over a wide range of equivalence ratios and pressures, for separate temperature ranges of 600–1100 K (LT) and 1100–1500 K (HT). One of the complex mechanisms was constructed to be simplified by a lumping approach and this one included MD and was also used to perform reduction for the alkane n-decane. The most detailed parent mechanism was used to create reduced mechanisms for all the three methyl esters. The lumped complex mechanisms resulted in more compact reduced mechanisms, 157 reactions for LT of MD, compared to 810 reactions for the more detailed mechanism. MD required the largest fuel breakdown subsets while the unsaturated methyl esters could be described by smaller subsets. All mechanisms had similar subsets for the smallest hydrocarbons and H/O chemistry, independent of the fuel and the choice of parent mechanism. The ACR approach for mechanism reduction created reduced mechanisms with high accuracy for all conditions included in the present study. View Full-Text
Keywords: methyl ester; reduced kinetic mechanism; ant colony reduction; chemical kinetics; biofuel; methyl decanoate methyl ester; reduced kinetic mechanism; ant colony reduction; chemical kinetics; biofuel; methyl decanoate
►▼ Show Figures 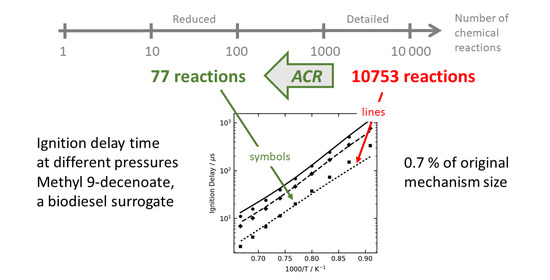