Composition of Reduced Mechanisms for Ignition of Biodiesel Surrogates

Anaerobically digested sewage sludges were used as feedstock in the production of activated carbons through physical activation. These char samples were experimentally tested as adsorbents for the removal of CO2 from a simulated biogas mixture. The CO2 concentration level allowed in biomethane was fixed from the European Standards EN 16723-1 and EN 16723-2. The char yield and the subsequent adsorption capacity values were studied, considering the operating parameters of the process. A physical activation process was considered with the following parameters: the temperature, the dwell time, the activating agent, the heating rate, the flow rate, and the method. Among the adsorption tests, the activating temperature and the agent employed affected the CO2 removal. The maximum adsorption capacity was achieved with nitrogen as an activating agent at 600 °C, with 2 h of dwell time (102.5 mg/g). View Full-Text
Keywords: pyrolysis; circular economy; wastewater; sewage sludges; biomethane; CO2 removal pyrolysis; circular economy; wastewater; sewage sludges; biomethane; CO2 removal
►▼ Show Figures 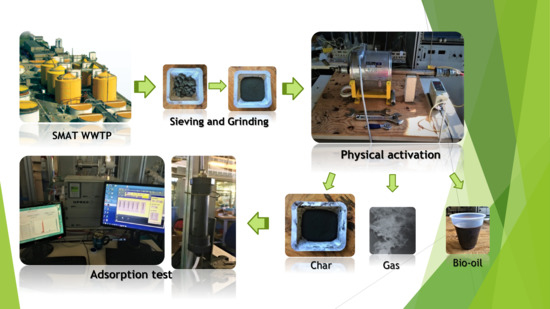