Pathological Maintenance and Evolution of Breast Cancer: The Convergence of Irreversible Biological Actions of ER Alpha

Estrogen receptor alpha (ERα) is a modulator of breast cancer maintenance and evolution. Hence, analysis of underlying mechanisms by which ERα operates is of importance for the improvement of the hormonal therapy of the disease. This review focuses on the irreversible character of the mechanism of action of ERα, which also concerns other members of the steroid hormones receptors family. ERα moves in permanence between targets localized especially at the chromatin level to accomplish gene transcriptions imposed by the estrogenic ligands and specific antagonists. Receptor association as at the plasma membrane, where it interacts with other recruitment sites, extends its regulatory potency to growth factors and related peptides through activation of signal transductions pathways. If the latter procedure is suitable for the transcriptions in which the receptor operates as a coregulator of another transcription factor, it is of marginal influence with regard to the direct estrogenic regulation procedure, especially in the context of the present review. Irreversibility of the successive steps of the underlying transcription cycle guarantees maintenance of homeostasis and evolution according to vital necessities. To justify this statement, reported data are essentially described in a holistic view rather than in the context of exhaustive analysis of a molecular event contributing to a specific function as well as in a complementary perspective to elaborate new therapeutic approaches with antagonistic potencies against those tumors promoting ERα properties. View Full-Text
Keywords: estrogen receptor; turnover; proteasome; cell-cycle estrogen receptor; turnover; proteasome; cell-cycle
►▼ Show Figures 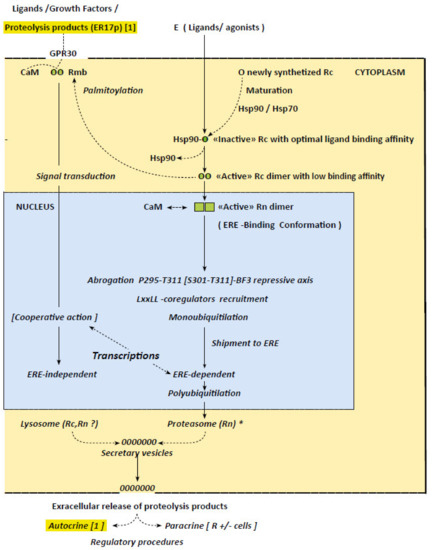