The term “spontaneous recovery” refers to a return to a previous condition without any external treatment. In cow mastitis, it refers to cases exhibiting visual symptoms (clinical) or an increase in somatic cell count (SCC) with no visual symptoms (subclinical), with or without identification of a pathogen, from which the animal recovers. A large retrospective analysis of data compiled from the Israeli Dairy Herd Book was performed to evaluate the occurrence of: (i) actual “spontaneous recovery” from the inflammation; (ii) recovery from the inflammation due to antibiotic treatment. In 2018, 123,958 cows from 650 herds with first elevation of SCC at monthly test-day milk yield were clustered into five SCC-cutoff levels (CL) (×103 cells/mL): CL1 (200–299), CL2 (300–399), CL3 (400–499), CL4 (500–999), CL5 (≥1000). Each cutoff level was analyzed separately, and each cow appeared only once in the same lactation and cutoff level, thus resulting in five independent analyses. Recovery was defined as decreased SCC on all three monthly test days, or on the second and third test days, set to: R1 (<100 × 103 cells/mL); R2 (<250 × 103 cells/mL). No difference was found among cutoff levels when the recovery was set to R1, with only 10–12% of the cows presenting spontaneous recovery. When the recovery was set to R2, percent spontaneous recovery was 25–27% at the three higher cutoff levels (CL3–CL5) and 35–41% at the lowest levels (CL1, CL2). Antibiotic treatment was administered to only ~10% of the cows, and in only the higher cutoff-level groups—CL4 and CL5. No difference was found between spontaneous recovery and recovery after antibiotic treatment. Moreover, percentage culled cows treated with antibiotics was significantly higher (p < 0.01) than that of non-treated culled cows (18 and 10.2, respectively), suggesting that the more severe mastitis cases were treated. We concluded that (i) actual spontaneous recovery from inflammation is low and does not depend on the number of cells in the milk at time of infection, and (ii) recovery from inflammation following antibiotic treatment is not higher. View Full-Text
Keywords: cow; subclinical mastitis; antibiotic treatment; recovery cow; subclinical mastitis; antibiotic treatment; recovery
►▼ Show Figures 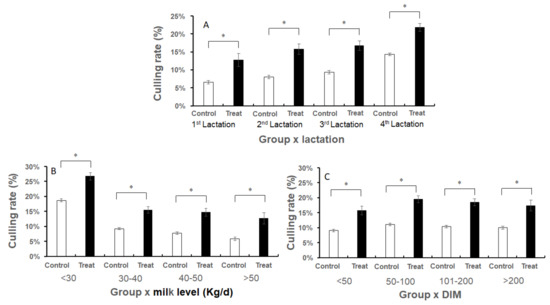