A feeding experiment was carried out with late-lactating cows over 12 weeks to evaluate the feeding value of a basic diet with maize and grass silage (MS, GS) when combined with varying portions of concentrate in the ration (20% and 60% on a dry matter basis) and to test the effects on health and performance, the transfer of important Fusarium toxins to blood and milk, the total and Shiga toxin (stx)-forming E. coli counts, and the presence of Clostridium botulinum neurotoxin (BoNT) genes in rectal fecal samples. MS was contaminated by a broader spectrum of fungal and other metabolites compared to GS. MS contained higher concentrations of the important Fusarium toxins deoxynivalenol (DON) and zearalenone (ZEN). Blood and milk levels of DON and ZEN residues generally reflected the differences in exposure at a low level. Feeding of MS with 60% concentrate feed induced subacute ruminal acidosis (SARA) associated with a marked drop in dry matter intake, fat corrected milk yield and a fat to protein ratio in milk of lower than 1. The SARA-associated higher ruminal LPS concentration did not affect the circulating concentrations of haptoglobin as an indicator of systemic inflammation. Lower rumen pH values in both MS-fed groups were associated with lower pH values, higher absolute E. coli counts and increased proportions of stx-positive E. coli in rectal feces. BoNT genes A, B, C, D, E and F remained undetectable in any of the fecal samples suggesting that feedstuffs were virtually free of the corresponding C. botulinum strains. In conclusion, maize feedstuff (silage, grains, starch-containing byproducts)-dominated rations for dairy cows should be avoided to reduce adverse effects on health and food safety. View Full-Text
Keywords: dairy cow; mycotoxins; Shiga toxin (stx)-forming Escherichia coli; Clostridium botulinum neurotoxin (BoNT) genes; rumen acidosis; hindgut acidosis dairy cow; mycotoxins; Shiga toxin (stx)-forming Escherichia coli; Clostridium botulinum neurotoxin (BoNT) genes; rumen acidosis; hindgut acidosis
►▼ Show Figures 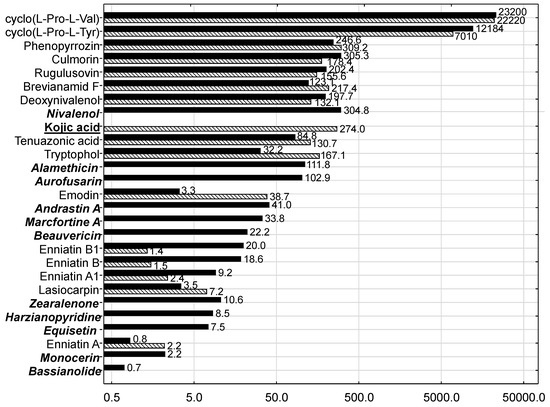