History contains many accounts of speeches given by civic and military leaders before large crowds prior to the invention of electronic amplification. Historians have debated the historical accuracy of these accounts, often making some reference to acoustics, either supporting or refuting the accounts, but without any numerical justification. The field of digital humanities, and more specifically archaeoacoustics, seeks to use computational techniques to provide empirical data to improve historical analysis. Julius Caesar recalled giving speeches to 14,000 men after the battle of Dyrrachium and another to 22,000 men before the battle of Pharsalus during the Roman Civil War. Caesar’s background and education are discussed, including his training in rhetoric and oratory, which would have affected his articulation and effective sound pressure level while addressing his troops. Based on subjective reports about Caesar’s oratorical abilities, his effective Sound Pressure Level (SPL) is assumed to be 80 dBA, about 6 dB above the average loud speaking voice but lower than that of the loudest trained actors and singers. Simulations show that for reasonable background noise conditions Caesar could have been heard intelligibly by 14,000 soldiers in a quiet, controlled environment as in the speech at Dyrrachium. In contrast, even granting generous acoustic and geometric conditions, Caesar could not have been heard by more than about 700 soldiers while his army was on the march before the battle of Pharsalus. View Full-Text
Keywords: acoustics; history; Julius Caesar; digital humanities; archaeoacoustics; acoustic simulation; historical speeches; general’s harangue; military history acoustics; history; Julius Caesar; digital humanities; archaeoacoustics; acoustic simulation; historical speeches; general’s harangue; military history
►▼ Show Figures 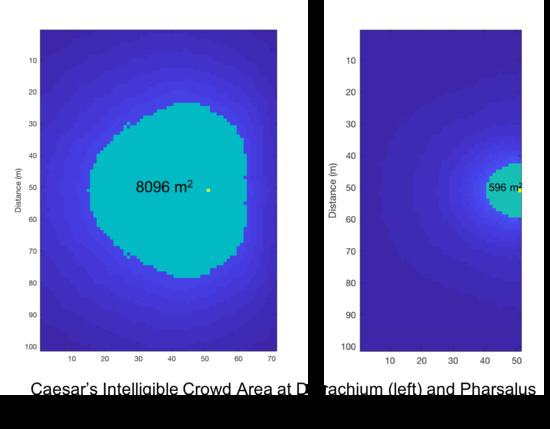