Methanol oxidation has been studied on low index platinum single crystal electrodes using methanol solutions with different pH (1–5) in the absence of specific adsorption. The goal is to determine the role of the interfacial structure in the reaction. The comparison between the voltammetric profiles obtained in the presence and absence of methanol indicates that methanol oxidation is only taking place when the surface is partially covered by adsorbed OH. Thus, on the Pt(111) electrode, the onset for the direct oxidation of methanol and the adsorption of OH coincide. In this case, the adsorbed OH species are not a mere spectator, because the obtained results for the reaction order for methanol and the proton concentrations indicate that OH adsorbed species are involved in the reaction mechanism. On the other hand, the dehydrogenation step to yield adsorbed CO on the Pt(100) surface coincides with the onset of OH adsorption on this electrode. It is proposed that adsorbed OH collaborates in the dehydrogenation step during methanol oxidation, facilitating either the adsorption of the methanol in the right configuration or the cleavage of the C—H bond.
Keywords: methanol oxidation; platinum single crystals; pH and concentration effects; adsorbed OH methanol oxidation; platinum single crystals; pH and concentration effects; adsorbed OH

The methanol (MeOH) oxidation reaction has attracted significant attention in the last decades, both from a fundamental and applied point of view [1,2,3,4,5]. From the fundamental approach, methanol is a small organic molecule and the knowledge acquired by studying its oxidation mechanism can be later transferred to more complex organic molecules. In fact, its mechanism can serve as a model for the oxidation of more complex alcohols, such as ethanol or ethylene glycol. On the applied side, methanol can be used as a fuel in fuel cells. When compared with hydrogen as fuel, methanol presents several practical advantages: It is liquid at room temperature with a high volumetric energy density and does not require the deployment of new distribution channels for its use. However, the anodic over-potentials are significantly higher than those measured for the hydrogen oxidation reaction. For this reason, the development of more effective electrocatalysis for the oxidation reaction is needed if methanol is going to be employed as fuel. The intelligent design of more efficient electrocatalysts requires a deep knowledge of the reaction mechanism.
Among all pure metals, platinum is the best electrocatalyst for the oxidation reaction. In the complete oxidation, six electrons are exchanged according to:
CH3OH + H2O → CO2 + 6H+ + 6e
It is now generally accepted that the oxidation mechanism takes place following a dual path mechanism [1]. In one of the paths, adsorbed CO is formed, which is considered a poisoning intermediate, because it is strongly adsorbed on the surface and its oxidation requires high potentials. On the other hand, the second path avoids the formation of CO and goes through an active intermediate [1]. In a reaction in which six electrons are exchanged, several intermediates are involved, and as has been proposed, the two paths may share some intermediates [6,7]. As happens in any reaction in which adsorbed intermediates are involved, the reactivity is very dependent on the surface structure [8,9,10,11,12,13,14]. Moreover, not only the surface structure, that is, the local arrangement of the surface atoms, affects reactivity, but also the interfacial structure and composition. First, the comparison between ultra-high vacuum and electrochemical environments indicates that the bonding mode of the methanol molecule is clearly affected by the presence of the interfacial water [10] because the proposed intermediates and their binding modes are different. Second, the presence of specifically adsorbed anions on the electrode surface inhibits the reactivity [11]. Thus, currents in the presence of sulfate or phosphate are significantly smaller than those measured in perchloric acid solutions. Additionally, other factors that affect the interfacial structure should be considered, such as, solution pH, and electrode charge. In all the cases, all these parameters modify the interaction between the methanol molecule and the surface, which in turn controls the reaction mechanism.
In order to have a deeper knowledge of the effects of interfacial on the methanol oxidation reaction, experiments in solutions with pH values ranging between one and five have been carried out. Due to the large impact of the specific adsorption of anions on the methanol oxidation currents [11], electrolyte solutions should have an adequate buffering capacity without containing anions that can adsorb strongly on the surface. For that purpose, mixtures of perchloric acid and fluoride have been used because perchlorate and fluoride anions do not adsorb strongly on the electrode surface and the pKa of HF/F- is 3.15 [15,16]. Furthermore, to better explore the relationship between the interfacial structure and the reactivity, methanol concentrations between 10−4 and 10−1 M have been used. The low concentration regime will allow detecting the modification of the adsorption behavior of the electrode due to the presence of methanol and relating them with the oxidation mechanism and its selectivity.

Low index platinum single crystal electrodes, namely Pt(111), Pt(100), and Pt(110), were fabricated from small single crystal beads (ca. 2.5 mm diameter). These beads were oriented, cut, and polished until mirror finish using the procedure described by Clavilier [17,18]. Prior to any experiment, the electrodes were cleaned by flame annealing, cooled down in a H2/Ar atmosphere and protected with water in equilibrium with this gas mixture [19]. The protected electrodes were immersed in the electrolyte solution at a controlled potential (0.1 V) in meniscus configuration so that only the surface with the desired orientation is in contact with the solution. For the Pt(111) and Pt(100), this procedure leads to the formation of a well-ordered surface with the nominal orientation [20,21]. Due to the reconstruction phenomena undergone by the Pt(110) surfaces, which is strongly affected by the treatment, the surface presented here corresponds to the (1 × 2) or (1 × 1)/(1 × 2) structure with major (1 × 2) contribution [22,23]. Thus, the observed behavior should correspond with that expected for the (1 × 2) surface, although contributions from the (1 × 1) cannot be discarded. The cleanliness of the electrode surface and the solutions were checked by voltammetry in the absence of methanol. The characteristic voltammetric profiles of the different electrodes, which are stable upon cycling when clean solutions are used, were obtained.
Experiments were carried out at room temperature, 22 °C, in classical two-compartment electrochemical cells de-aerated by using Ar (N50, Air Liquide, Paris, France, in all gases used), including a large platinum counter electrode and a Reversible Hydrogen (N50) Electrode (RHE) as reference. The solutions were prepared using concentrated HClO4 (for analysis, Merck KGaA, Darmstadt, Germany), NaF (99.99%, Suprapur, Merck KGaA, Darmstadt, Germany), KClO4 (Suprapur, Merck KGaA, Darmstadt, Germany), and ultrapure water (Purelab Ultra, Elga, High Wycombe, United Kingdom). Solutions with a pH between two and five were prepared using mixtures of NaF and HClO4 so that the buffering capacity is high enough to maintain the interfacial pH constant. Voltammograms were recorded using a potentiostat (EA161, eDAQ, Sydney, Australia) and a digital recorder (ED401, eDAQ, Sydney, Australia) in a hanging meniscus configuration.

The use of diluted methanol solutions with different pH has allowed establishing relationships between the interfacial structure and the reactivity. First, the results indicate that methanol oxidation is only taking place when the surface is partially covered by adsorbed OH. Thus, the dehydrogenation step to yield adsorbed CO on the Pt(100) surface starts on the same electrode potential for the onset of OH adsorption on this electrode. On the other hand, on the Pt(111) electrode, where CO is not accumulated, the onset for the direct oxidation of methanol and the adsorption of OH coincide. In this case, the adsorbed OH species are not a mere spectator, because the obtained results for the reaction order for methanol and the proton indicate that OH adsorbed species are involved in the reaction mechanism. Since previous results show that the rate determining step in the methanol oxidation reaction is a dehydrogenation step, probably adsorbed OH collaborates in this step, facilitating either the adsorption of the methanol in the right configuration or the cleavage of the C—H bond so that the activation energy is minimized. These results are important for the computational modeling of the reaction because adsorbed OH should be incorporated in the model to reflect the real interfacial structure. 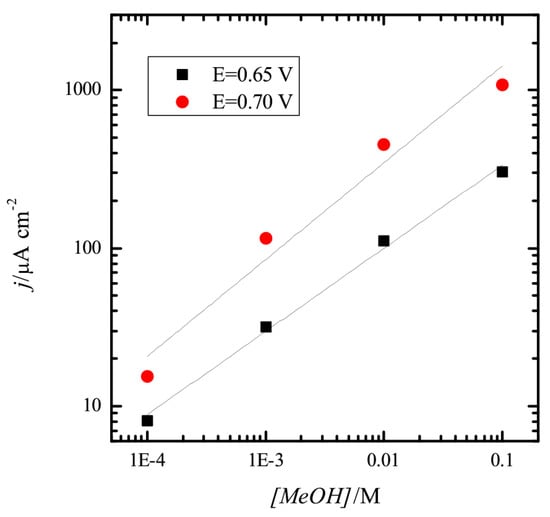 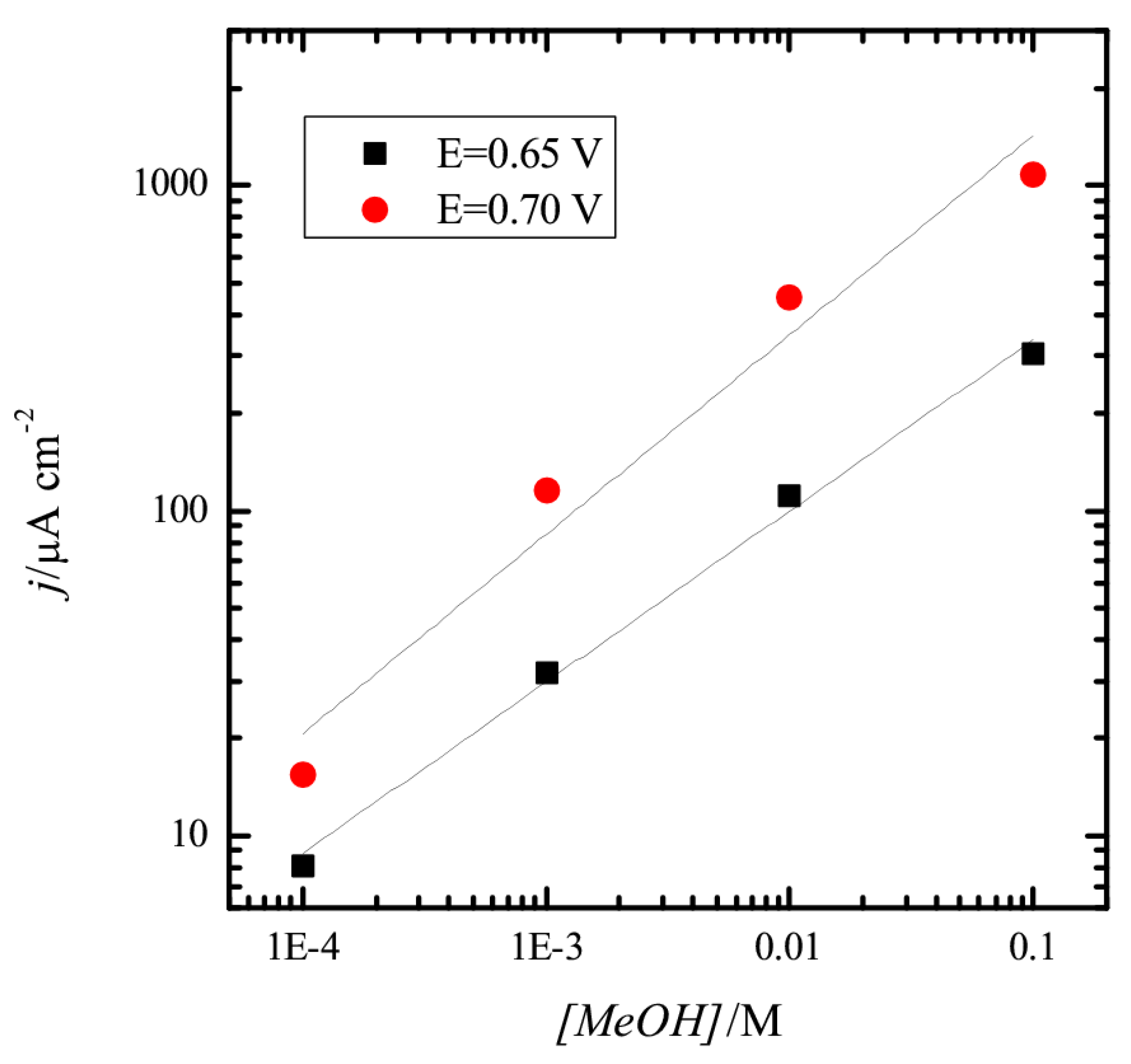 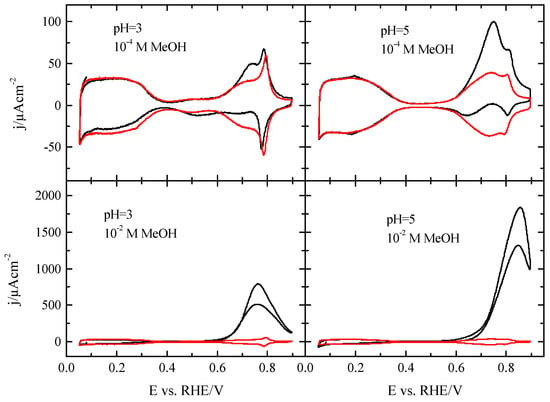 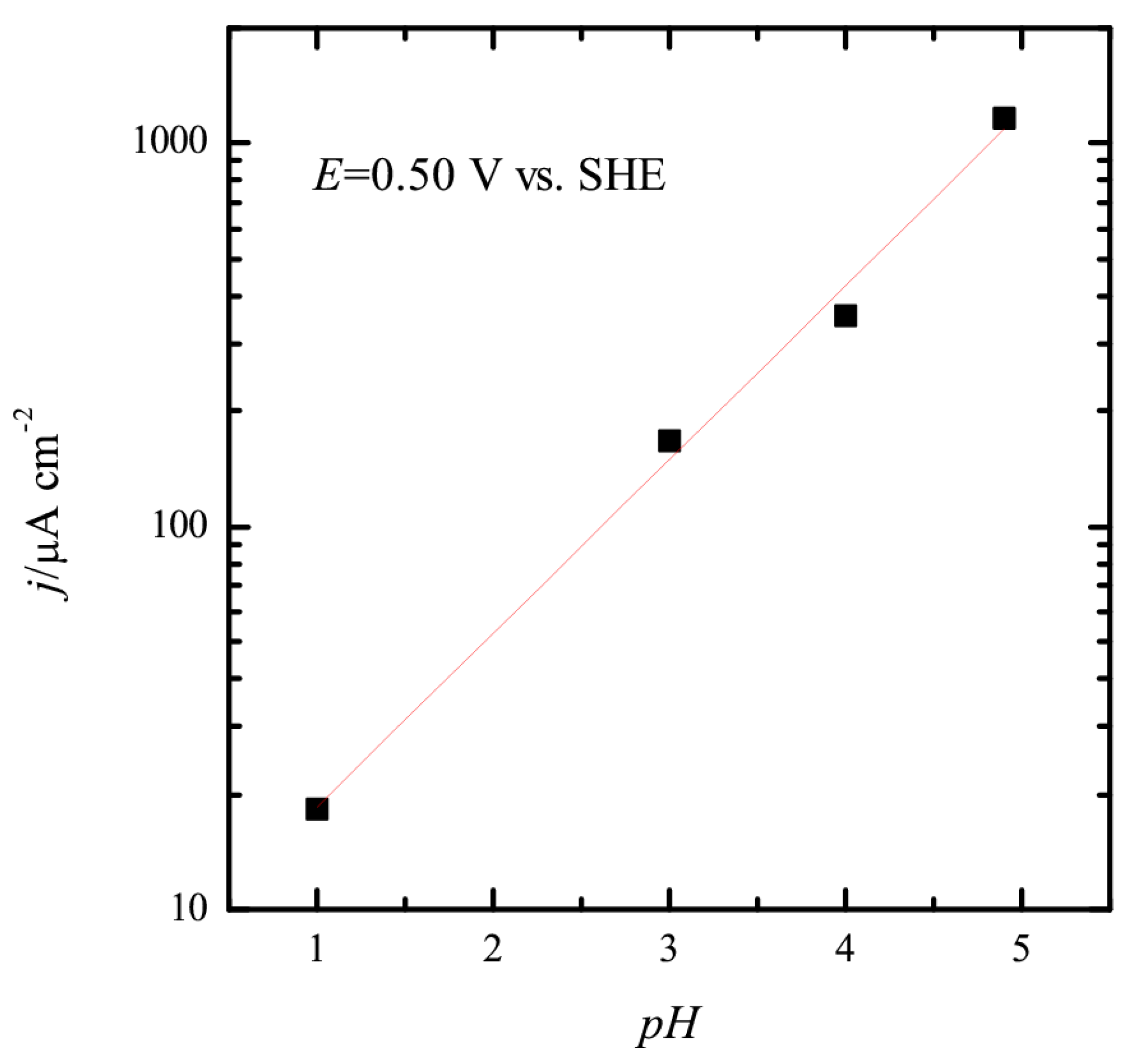 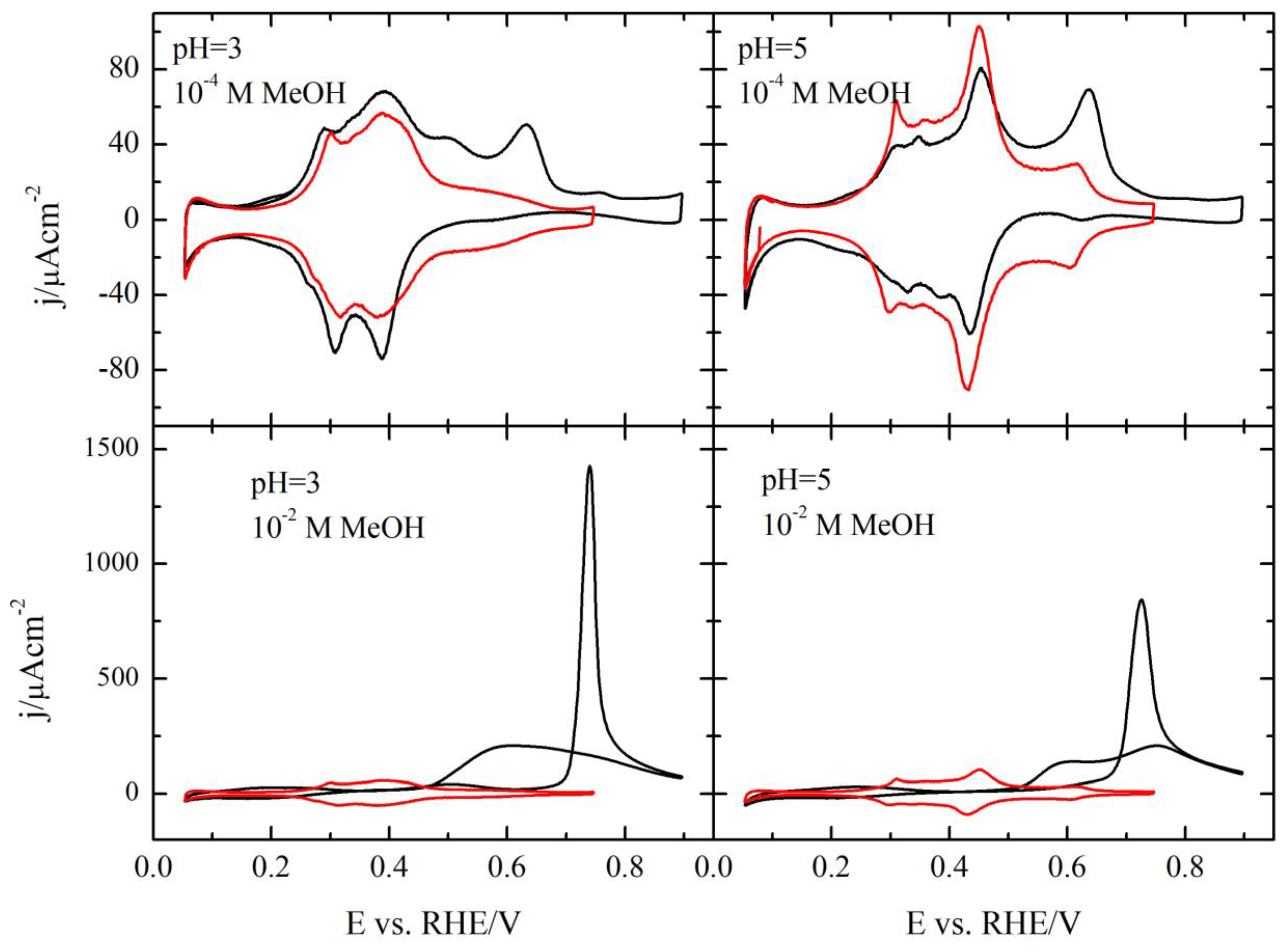 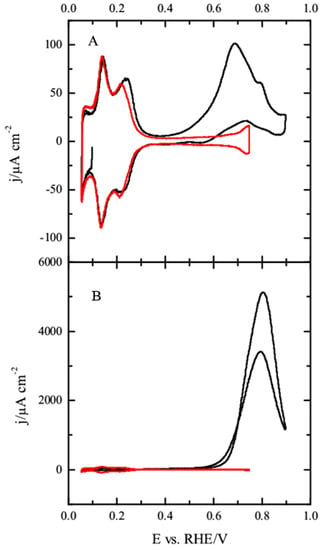