Morphology and porosity are crucial aspects for designing electrodes with facile transport of electrons, ions and matter, which is a key parameter for electrochemical energy storage and conversion. Carbon nanofibers (CNFs) prepared by electrospinning are attractive for their high aspect ratio, inter-fiber macroporosity and their use as self-standing electrodes. The present work compares several strategies to induce intra-fiber micro-mesoporosity in self-standing CNF webs prepared by electrospinning polyacrylonitrile (PAN). Two main strategies were investigated, namely i) a templating method based on the addition of a porogen (polymethyl methacrylate, polyvinylpyrrolidone, Nafion® or ZnCl2) in the electrospinning solution of PAN, or ii) the activation in ammonia of previously formed CNF webs. The key result of this study is that open intra-fiber porosity could be achieved only when the strategies i) and ii) were combined. When each approach was applied separately, only closed intra-fiber porosity or no intra-fiber porosity was observed. In contrast, when both strategies were used in combination all CNF webs showed high mass-specific areas in the range of 325 to 1083 m2·g−1. Selected webs were also characterized for their carbon structure and electrical conductivity. The best compromise between high porosity and high electrical conductivity was identified as the fibrous web electrospun from PAN and polyvinylpyrrolidone. View Full-Text
Keywords: carbon nanofiber; porous fiber; electrospinning; mesopore; micropore; porogen; ammonia activation; surface area carbon nanofiber; porous fiber; electrospinning; mesopore; micropore; porogen; ammonia activation; surface area
►▼ Show Figures 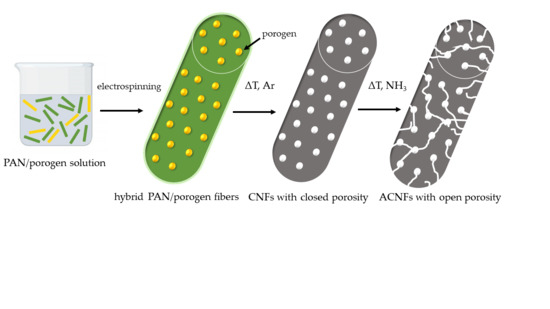