A Citizen Science Approach to Build a Knowledge Base and Cadastre on Earth Buildings in the Weinviertel Region, Austria
Next Article in Special Issue

Virtual Restoration and Visualization Changes through Light: A Review

Imaging spectroscopy (IS) is a well-established analytical method in heritage science [1,2]. Based on the literature review done in 2014 [3] and a more recent one in 2020, it was possible to identify a deficiency about standards and experimental studies for the quantification of the impact and monitoring sensitivity of IS on heritage materials. With the intent of partly filling this knowledge gap we have been using the “SEPIA” hyperspectral imager of the Nationaal Archief (National Archives of The Netherlands) as a case study instrument. The described method can be transferred to validating other IS instruments and applications.
Assessing the impact of the environment and potential changes on cultural heritage during exhibitions is part of the professional standards of conservators [4] and their code of ethics [5]. The environmental parameters for long-term preservation of historical documents in storage are recommended to be 16 °C to 20 °C, 35 to 50% RH, and complete darkness [6,7,8]. When a historical document is not in storage but exhibited or otherwise exposed to light, it could undergo unwanted degradation. In conservation assessment, qualitative methods such as visual examination or photographic documentation are usually employed. More advanced and objective methods for monitoring changes are point-based measurements done with non-destructive methods such as single beam spectrometry or with micro-invasive chemical analysis by micro-sampling the monitored object. Both methods are effective in giving information about the analysed area, but they preclude the assessment of the overall condition of those artefacts that are very inhomogeneous. Moreover, the use of micro-invasive tests is in most of the cases not allowed and it cannot be repeated multiple times on the same spot. IS represents for this reason the most promising method for monitoring the optical properties of heritage materials in a non-invasive way and in the long term [9,10,11]. The spatial and spectral characteristics of IS instruments can in fact allow for the identification of entire areas on the monitored document where changes occur rather than single spots.
There is a clear distinction between using IS as an analytical tool and as a monitoring instrument. Monitoring involves technical challenges such as the alignment and comparison of images taken of the same area at different times, repositioning of the camera and illumination and choice of calibration standards. A project on the digitization of paintings using multispectral imaging at the National Gallery of London in 1988 was one of the first works in the field of heritage science that addressed these issues [12]. Following to that, the VASARI project was the first attempt to standardize monitoring of paintings [13,14]. This project was then followed by the MARC and the CRISATEL projects [15,16,17]. In book and paper conservation, only a few research projects have so far addressed the use of IS for monitoring purposes [18,19,20,21,22,23,24].
From a conservation point of view, ideally repeated measurements should not damage the monitored objects at all. It is of course essential that the monitored condition indicators are not changed more significantly by the monitoring instrument itself than by the exhibition conditions. The cumulative light dose depends on the measurement frequency, monitoring period (typically years), and the construction of the IS instrument itself. The IS instrument is deemed to be suitable for the intended monitoring applications, if any cumulative colour changes induced by the measurement itself remain well below the threshold of visual perception for even the most light-sensitive material. Note that different criteria and thresholds for the acceptable impact of the instrument may be chosen, depending on the range of materials, the measurement schedule, and the intended monitoring period.
Ideally, the IS instrument has to enable the detection of changes before such changes become visibly detectable so to prevent the occurrence of damages rather than documenting them. The repeatability of measurements, which determines the sensitivity limit for detecting changes in the object, depends on the construction of the instrument and the measurement method, spectral calibration, and methods and software algorithms applied to the comparison of measurements of the same object taken at different times.

This article describes a generally applicable approach to evaluation whether an imaging spectroscopic instrument is suitable as a tool for monitoring of archival documents. Depending on the object type to be investigated, instruments are typically selected based on their spectral range and resolution, their field-of-view and spatial resolution. However, in order to be useful for monitoring, an IS instrument has to fulfil two additional requirements:
We have shown that Requirement 1 can be tested by subjecting Blue Wool Standards to repeated measurements, corresponding to the intended duration of the monitoring schedule. The induced spectral change needs to be determined with an independent, sufficiently sensitive method, such as a spectrophotometer.
From a conservation point of view, the decision whether the predicted spectral changes induced by IS measurements themselves are acceptable or not must become part of the overall risk assessment of an institution’s exhibition and monitoring schedule. A reasonable guideline would be that the spectral changes induced by measurements must be significantly less than those expected from exposure during exhibitions.
In the case study discussed here, the “SEPIA” hyperspectral imaging system was tested for an intended monitoring period of 20 years with an average of two measurements per year. The spectral changes induced by the tested IS instrument in Blue Wool Standard Grade 1 remained below the threshold for visually perceptible colour changes of ΔE2000 = 0.7, which fulfils Requirement 1.
In order to test Requirement 2, sample materials representative of the monitored objects should be used in addition to standard reference materials. This is because the wavelength range and degree of spectral change depend on the material composition. Furthermore, the strength and spectral characteristics of light-induced change typically depend significantly on the irradiation spectrum. It is therefore advisable that the sample materials are exposed to accelerated degradation under conditions similar to those they are exposed to during exhibitions, in order to induce the same type of spectral change.
In our case study, four archival materials were subjected to accelerated ageing by 30 different combinations of light intensity and duration, corresponding to light doses of up to 500 klx·h. The deployed lamp type was the same as that used in the exhibition room De Verdieping van Nederland at the Nationaal Archief, to ensure that the same type of spectral change is induced as expected for exhibitions. The samples were irradiated with only moderate light intensities of up to 5000 lx and forced-air cooling was applied to minimize their temperature increase. The induced spectral changes should not be distorted significantly by any non-linearity of the material response with respect to the intensity (reciprocity-failure [36]) or by very high local sample temperature and low humidity. The spectral changes in the experiment are therefore expected to be comparable to those incurred by the materials over many years due to the normal exhibition schedule.
The changes were evaluated by calculating colour differences ΔE2000 and standardized Euclidian distances ΔEuclid between the sample spectra measured before and after accelerated light ageing. The minimum light dose required to induce a detectable spectral change varied considerably from material to material. For the most light-sensitive Blue Wool Standard Grade 1, the detection limit for light-induced colour change corresponded to an exhibition period of ~10 days.
The instrument was thus shown to have an acceptably small impact on the materials, fulfilling Requirement 1, and acceptable high detection sensitivity for changes induced by exhibition lighting, i.e., also fulfilling Requirement 2.

In our research, the spectral change detection limit was determined on the basis of measurement repeatability over a time span of a few weeks. However, for long-term monitoring applications, long-term repeatability should be established. Future studies will have to look into practical calibration and validation procedures that are stable over long periods of time. In conclusion, imaging spectroscopic instruments can be valuable tools for monitoring the condition of archival documents and the present case study should be useful to establish the suitability of other instruments and similar case studies.

This research received no external funding, but it was made possible thanks to the resources made available by the Nationaal Archief to Roberto Padoan for building the light-aging chamber and preparing and carrying out the measurements in 2014 during his work as books and paper conservator. 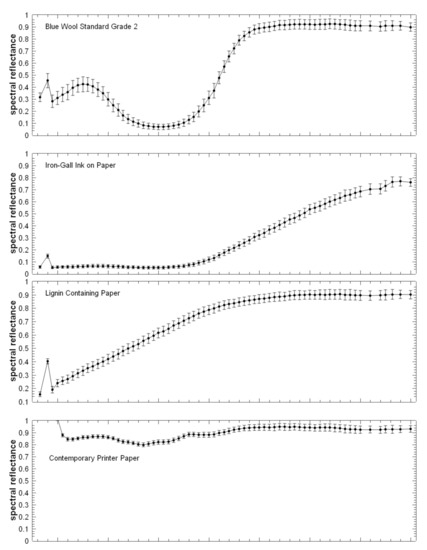 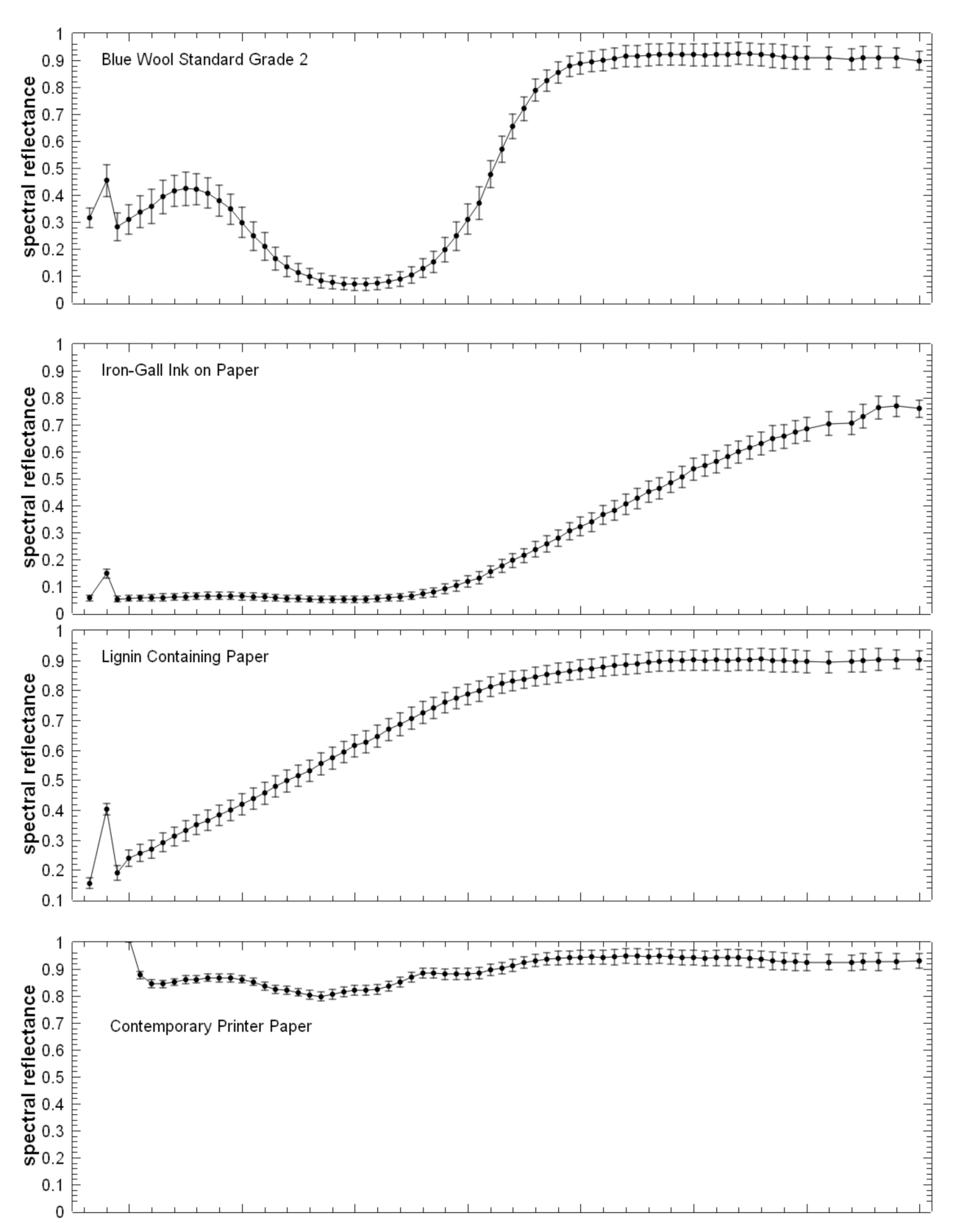