Towards an Online Database for Archaeological Landscapes. Using the Web Based, Open Source Software OpenAtlas for the Acquisition, Analysis and Dissemination of Archaeological and Historical Data on a Landscape Basis
Next Article in Special Issue

By the Hand of Angelos? Analytical Investigation of a Remarkable 15th Century Cretan Icon

Virtual Restoration and Visualization Changes through Light: A Review

The virtual modification of the appearance of an object using lighting technologies has become very important in recent years, since the projection of light on an object allows us to alter its appearance in a virtual and reversible way. Considering the limitation of non-contact when analysing a work of art, these optical techniques have been used in fields of restoration of cultural heritage, allowing us to visualize the work as it was conceived by its author, after a process of acquisition and treatment of the image. Furthermore, the technique of altering the appearance of objects through the projection of light has been used in projects with artistic or even educational purposes. This review has treated the main studies of light projection as a technique to alter the appearance of objects, emphasizing the calibration methods used in each study, taking into account the importance of a correct calibration between devices to carry out this technology. In addition, since the described technique consists of projecting light, and one of the applications is related to cultural heritage, those studies that carry out the design and optimization of lighting systems will be described for a correct appreciation of the works of art, without altering its state of conservation.
Keywords: projection mapping; calibration; lighting; cultural heritage projection mapping; calibration; lighting; cultural heritage

The colour and appearance of an object depend on the physical and chemical properties of the object itself, the source of visible electromagnetic energy that illuminates it, and the observer who detects the energy reflected by the object [1]. Taking into account these three factors, it is possible to think that by projecting adequate lighting on an object, its appearance could be altered.
From this idea, the term Mixed Reality arises, in order to alter the perception of reality including virtual content. Milgram and Kishino defined the concept of mixed reality as a subset of the technologies related to virtual reality, which includes Augmented Reality (AR) and Augmented Virtuality (AV). Thus, they defined Milgram’s Reality–Virtuality Continuum (Figure 1), which is a line on which the virtual space is located at one end, real space at the other, and AR and AV in the center. AR was defined by Milgram and Kishino as the technology that improves the visualization of a real environment through virtual objects and AV was defined as the opposite of AR. Therefore, in Figure 1, AR is closer to reality and AV closer to virtuality [2].
Taking these factors into account, it is possible to think that by projecting adequate lighting on an object, its appearance could be altered in a virtual and therefore reversible way. Thereby, the technique of Spatial Augmented Reality (SAR) or projection mapping arises, which uses optical elements and video projectors, holograms, radio frequency labels and other tracking technologies to display virtual information directly on an object altering their appearance [3,4,5].
Azuma, in 1997, completed the definition of Milgram and Kishino, defining AR as ‘a technology that allows the user to see the real world, with virtual objects superimposed or compounded with the real world’ [6].
In recent years, AR has become more important in fields such as education, entertainment, conservation, restoration and adequate exhibition of cultural heritage, among others [3,7].
The projection mapping technique uses cameras to capture the object to be illuminated and projectors to project the desired image onto the object. It has the advantage over other AR techniques that it doesn’t require viewers to use any type of glasses or instrument to appreciate the effect, allowing multiple users to appreciate the effects of projection mapping technology at the same time [5].
Section 2 of this article collects those studies which use the projection mapping technique in order to alter the appearance of an object, with special emphasis on those studies that use the technique as a method of displaying cultural heritage.
For the development of the projection mapping technique, a meticulous calibration method is required that allows adequate synchronization between the instruments used. Then, it is necessary that the image be correctly located on the object, avoiding unwanted effects. Section 3 of this article lists the main calibration techniques used in projection mapping in recent years.
The complexity of implementing this technique in the field of conservation of cultural heritage objects consists in the development of a lighting system that allows a safe display of the artwork without producing alterations in its appearance with respect to when it was made by the artist. This is due to the photochemical and thermal effect of light, causing degradation of the materials it illuminates. Section 4 of this article collects the most significant techniques to address this difficulty.

The ability of the projection mapping technique to alter the appearance of an object by projecting light on it has made its applications more and more common every day, as shown in Figure 2. Under the name of Shader Lamps, Raskar in 2001 introduced the idea of animating white objects without texture by projecting different graphic images on them, altering the appearance of these objects by varying their perception of colour and texture [8].
Amano, by means of superimposed projection, altered the appearance of contrast in real objects that already had their own colourimetric and texture properties [9].
In Wang et al. (2010), the concept of context-aware light source was introduced, defined by them as ‘a light source that can modify its lighting depending on the sensor information obtained from the scene’. It is a projection mapping application, which works by means of the previous acquisition of the information of the scene by a camera, so that after the appropriate image treatment, the improvements are shown on the object through a projector. In this way, it allows improving the appearance of an object in real time, even if the user manipulates it. From a context-aware light source, they developed the concept of proxy light, designing a portable instrument which, as if it were a common flashlight, allows the user to illuminate the areas of the object they want, appreciating parts of the object that are not perceptible to the naked eye by humans. This instrument is a very valuable tool for museumgoers, archaeologists, and art restorers [10].
Later, in 2014, Revealing Flashlight emerged. It is an instrument that, like the one described by Wang et al., allows users to visualize hidden parts of an object. Wang et al.’s instrument works in real time, so it is limited by the camera resolution and 2D image processing, Revealing Flashlight performs 3D object pre-analysis, then the displayed images are not limited by the camera resolution or by analysis time, thus allowing a more detailed visualization of the object, obtaining the results shown in Figure 3 [11].
Both Punpongsanon et al. and Kawabe et al. used the projection mapping technique in combination with psychophysical studies to alter the perception of movement through lighting [12,13]. Kawabe et al. developed a technique called Deformation Lamps to achieve the perception of the movement of objects while maintaining their original colour and texture [12]. Punpongsanon et al. used the mapping projection technique to alter the perception of bending stiffness of a fabric [13].
Among the applications mentioned above, the application related to the conservation and exhibition of cultural heritage objects will be described in more depth.
Some artworks have had their appearance affected due to the action of external agents, such as non-optimal humidity/temperature conditions or the incidence of electromagnetic radiation from the sun or different sources of artificial light over their years of exposure [14,15,16]. A restoration by a classical method can then be complicated. However, by means of the projection mapping technique, a restored vision of the artwork can be obtained by projecting an image on it, called in many studies the compensation image.
Lafontaine presented the precursor of this technique in 1986: he developed a projection technique by which an artwork can be visualized without affecting the yellowing that occurs in its varnish with the incidence of electromagnetic radiation on it [17].
The projection mapping technique was used in 2005 by Peral to virtually restore the appearance of the portico of Saint Mary’s Cathedral in Vitoria (Spain) [18].
Aliaga et al. (2008) presented a technique to restore deteriorated objects by projecting light with multiple overlapping projectors. They proposed an interactive restoration algorithm, in which users could select those points they want to restore in a captured image. Then, using a restoration algorithm, one could obtain the compensation image and thus project it onto the object [19].
Aleksić and Jovanović used the virtual restoration technique through projection mapping to obtain a restored view of Lazar Vozarević’s Untitled from 1961. To do this, they were inspired by the technique developed by Stenger in restoring Mark Rothko’s murals, since both artists used very similar chemical compositions for the development of their work. But unlike Stenger’s work, Vozarevic’s work has a three-dimensional geometry, requiring a different restoration technique [20].
Recently, Vázquez et al. (2020) presented a method of restoring artworks by projecting light point by point, characterized by the previously acquired spectral reflectance of the artwork. For their procedure, they used a photograph of Sorolla’s Walk on the Beach that was previously artificially aged using a Matlab algorithm, as shown in Figure 4 [21].

This review article has treated the main studies that have been carried out in recent years that use the projection mapping technique. Its purpose has been to provide the necessary help related to the calibration and lighting processes that may be required in future applications.
In the section on calibration techniques, different viable methods have been described to achieve the alignment between camera and projector, such as the structured light method [10,22], the beam splitter method [10], and the use of the Harris corner detector [24]. Furthermore, in many of the studies, different limitations have been taken into account, such as feedback, or the minimization of in virtual restoration applications, proposing in both cases suitable solutions.
When using the projection mapping technique, attention must be paid to adequate lighting conditions, especially in those applications related to the exhibition and conservation of cultural heritage objects. For this reason, in the fourth section of this article, there have been reviewed the main lighting optimization studies whose aim is to minimize the change in appearance of the illuminated surface while reducing the harmful effects of radiation.

This work has been funded by project number RTI2018-097633-A-I00 of the Ministry of Science and Innovation of Spain, entitled ‘Photonic restoration applied to cultural heritage: Application to Dali’s painting: Two Figures.’ 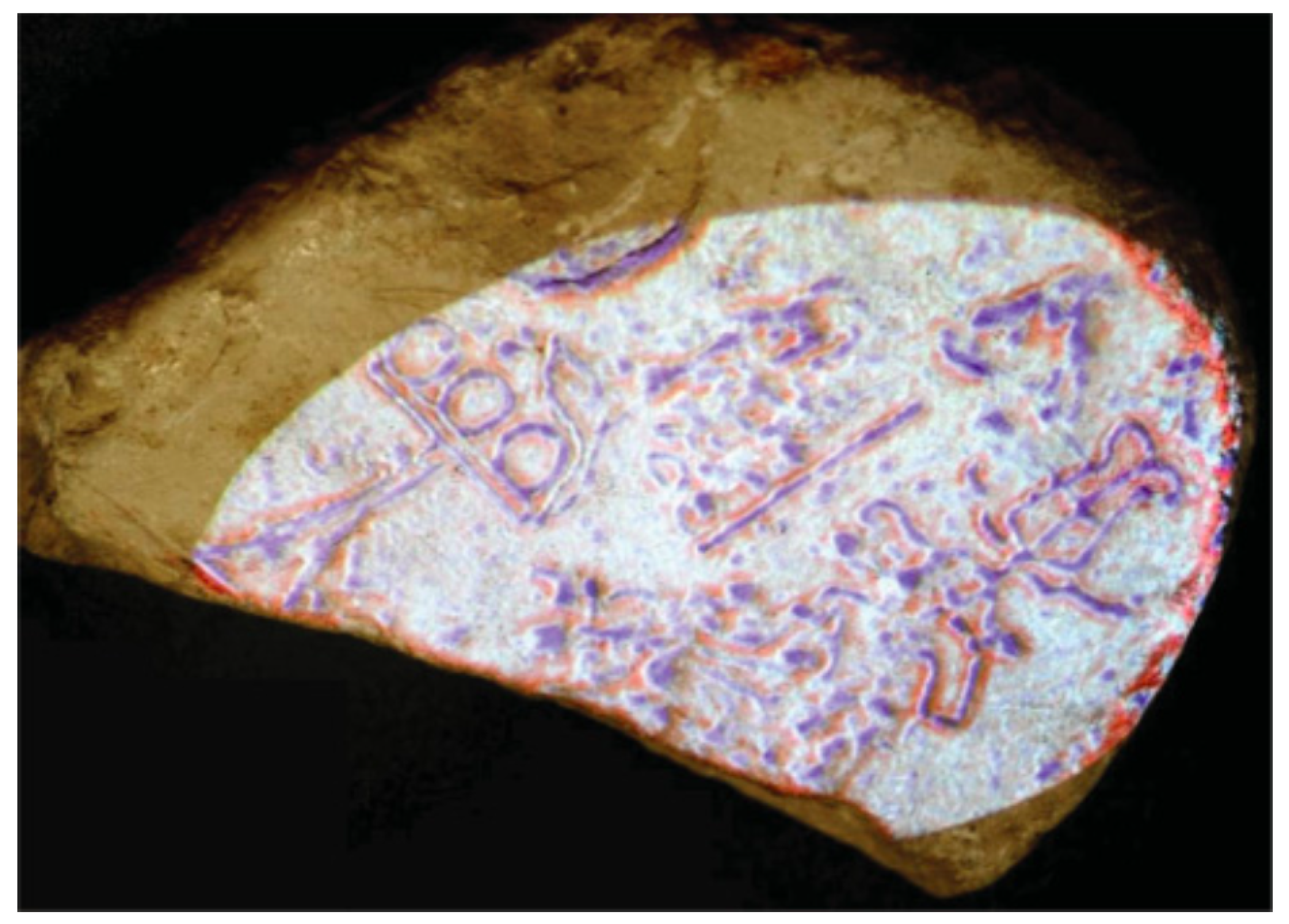